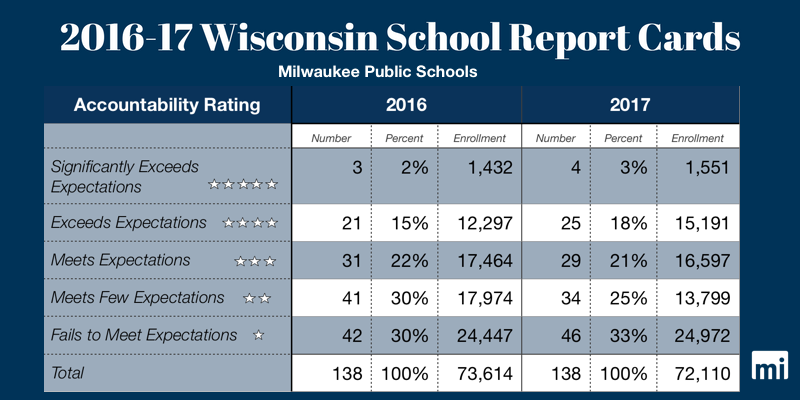 [Madison, Wis…] State report cards are out for the 2016-17 school year. Now that we’ve examined student achievement as a whole, let’s shine a spotlight on some important subgroups. We’ll start with the state’s biggest district: Milwaukee Public Schools (MPS).

The new report cards show that MPS is still struggling. Like last year, the district came in just above the cutoff score for “failing” districts. With 56 out of 100 possible points for student achievement, the state’s largest district also has the second lowest overall grade and “meets few expectations.”

This year, MPS schools tended to move out of the middle two categories towards the extremes. More schools got the top two ratings, and more got the bottom rating. 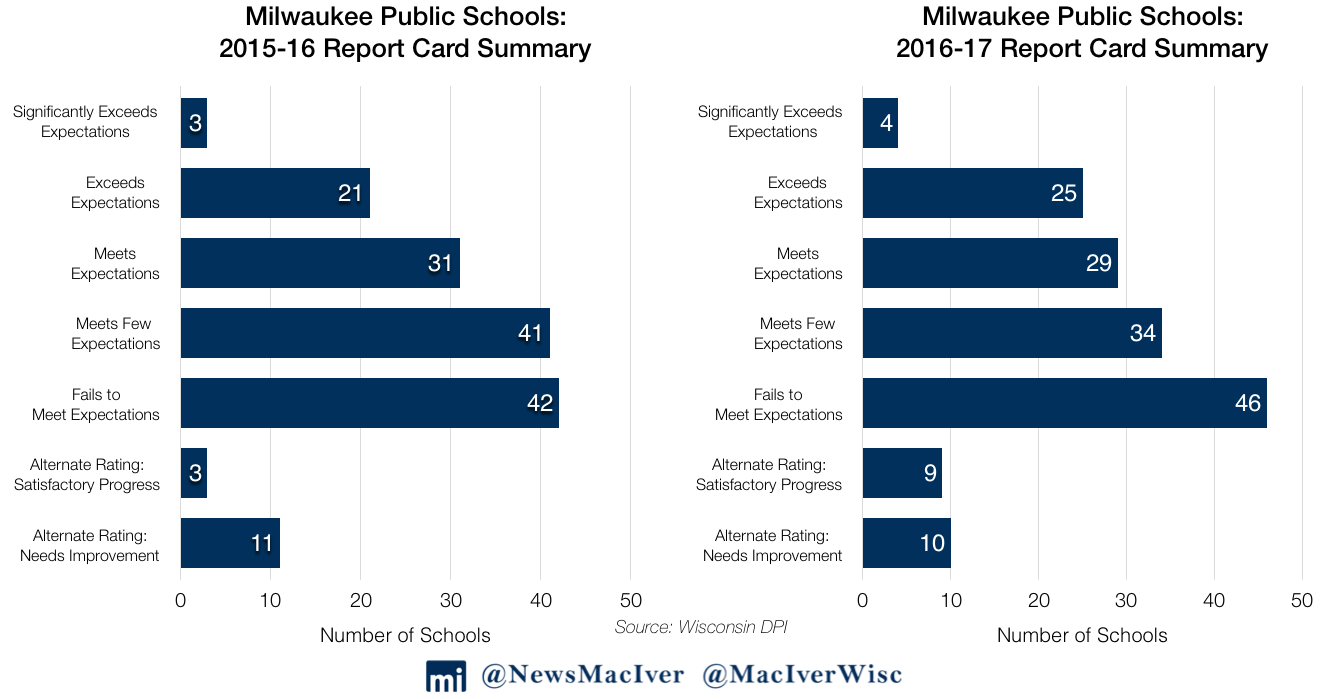 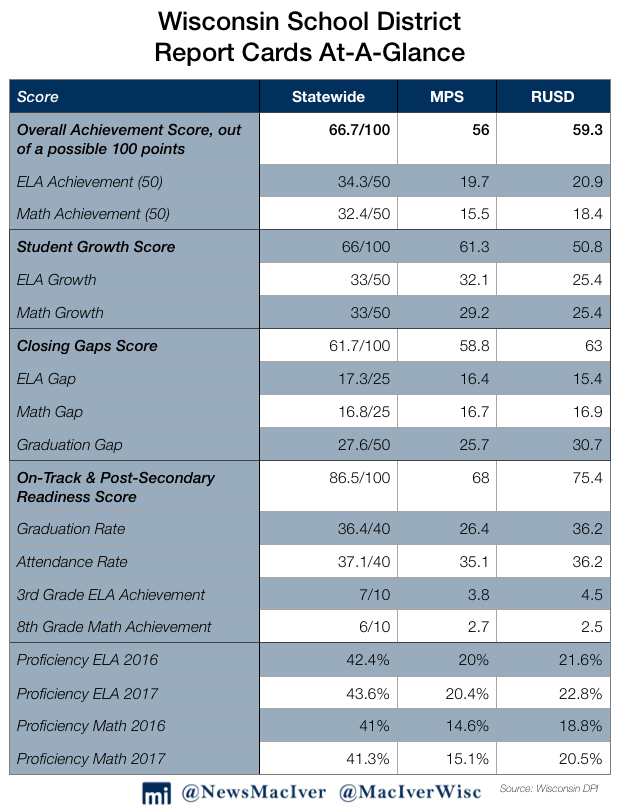 On the other side of the achievement spectrum, one more school earned the top score of five stars. About 1,550 students attend MPS’ best schools, three of which are charter schools. All four are elementary schools. Carmen High School of Science and Technology earned the best rating out of any MPS high school, with four stars and 74.9 points. Carmen is also a charter school.

Report cards are scored based upon four major priority areas for the state: achievement, growth, closing gaps, and on-track and post-secondary readiness. While MPS had the state’s lowest achievement score, it fared better in the growth category, scoring 61.3 out of 100 points. That signifies that while the district as a whole has poor achievement, students are faring better on English language arts and math over time.

In both subjects, MPS had a higher score than other troubled districts, including Racine Unified. However, because of the high percentage of economically disadvantaged students at MPS, growth is weighted much more heavily than overall achievement.

Racine Unified: No Longer “Failing,” But… 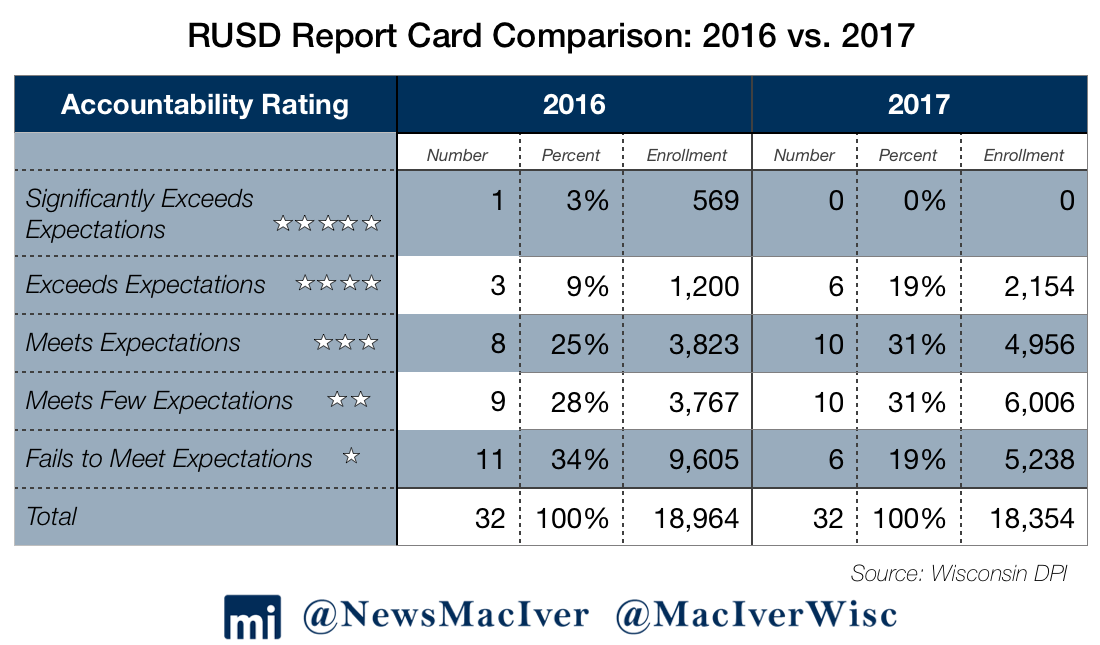 All eyes were on Racine Unified School District (RUSD) this year as it worked to improve its rating and avoid inclusion in the Opportunity Schools and Partnership Program. In the end, the district pulled it off. RUSD received the two-star ranking of “meets few expectations.” 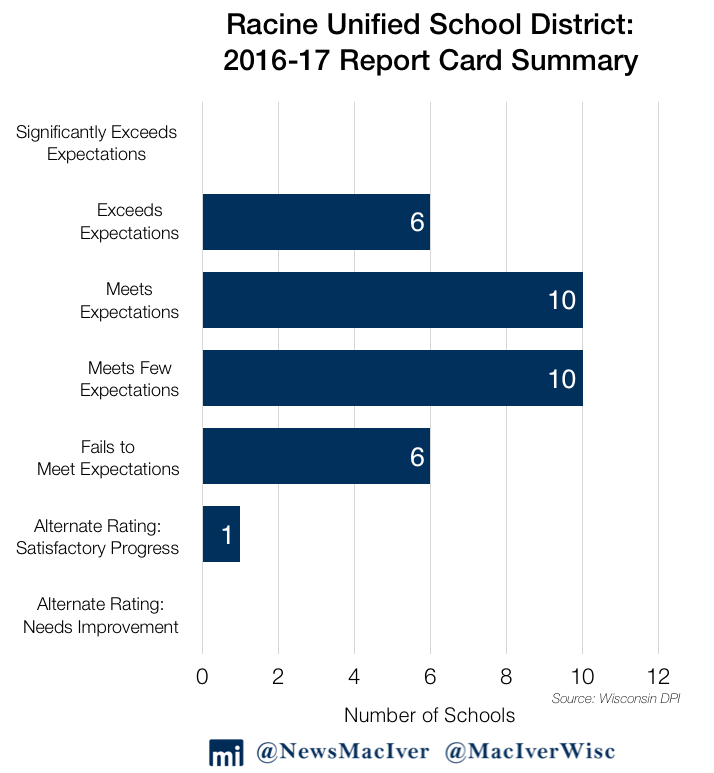 As a whole, RUSD received 59.3 out of 100 points on overall achievement. Students fared slightly better at ELA achievement, earning 20.9 of 50 points in that category compared to 18.4 of 50 in math achievement. However, growth was worse than even in MPS – the district earned just 50.8 points out of 100 for overall student growth.

RUSD’s standing improved enough to move out of the failing category. That was particularly crucial this year, as the Opportunity Schools and Partnership Program (OSPP) could have come into play.

OSPP was a program established by legislative leaders two years ago that would create a new school district for schools that showed no signs of improving. They would get a specially appointed commissioner and a turnaround plan just for those schools. You can catch up on the idea here, but keep in mind that it has never been used in Wisconsin.

Why? When the plan was attempted at MPS two years ago, local leaders and the local teachers’ union had no interest in allowing a turnaround czar to implement reforms. As soon as OSPP was dubbed a racist “takeover” plan, the attempt to help the district was over before it started.

That doesn’t change the fact that federal law now requires states to step up and fix the bottom 5 percent of low-performing schools. That requirement comes from the Obama administration’s Every Student Succeeds Act, which is still being put into place.

Should it ever be used, OSPP is supposed to go into place after a district is deemed “failing” for two consecutive years. After MPS dropped off the failing list last year, OSPP could no longer apply – but RUSD’s inclusion on the one-star list put that district in the spotlight.

Not one Racine Unified school received the top ranking of five stars, and six schools got just one star.

In response, RUSD changed superintendents and made reforms. They also lobbied the legislature for a year-long pass from OSPP, hoping to avoid the program even if they were again declared failing. They succeeded on both accounts.

A last minute budget motion put new compliance requirements into place for the district. RUSD has until late next month to prove that it’s fully compliant with Act 10 and that public unions are not collectively bargaining with school officials outside the law’s limitations.

The budget also included funding to study the idea of splitting apart RUSD in the future. More specifically, the smaller villages and communities surrounding the city of Racine could create their own district if they so choose. However, that would be costly in a number of ways – for one, the city itself has most of the district’s school buildings and assets.

Choice and Charter: A Landmark Year for Transparency, But Data Gaps Remain

This year’s report card release was particularly important for schools in the private choice program – it marked the first year that any choice students would get graded report cards. Some private schools received report cards for participants in the choice programs last year, but none received official accountability ratings because of a lack of data.

56 percent of the schools that got report cards were not rated because of a lack of sufficient data. That gap in data significantly alters the score distribution for private choice programs.

However, Will Flanders of the Wisconsin Institute for Law and Liberty ran an analysis, between comparable populations of students, showing “that students in these school choice programs have, on average, 8-24 percent higher student growth than traditional public schools.”

“For all publicly-funded students in Milwaukee, 11 of the 15 highest category schools are private schools in the Milwaukee Parental Choice Program.” Bender said. “There needs to be more schools in this category, throughout all sectors, but it is promising that these schools are already demonstrating success.”

Charter schools will be a group to watch in the coming years, not just because they tend to post higher scores, but also because of a recent change in state law. The 2017-19 biennial budget allows for charter schools to open up anywhere in the state. They had previously been limited to Madison, Milwaukee, and other larger Wisconsin cities and towns. As highlighted earlier, three of the four best-rated MPS schools are all charters.

Listen to the MacIver Institute’s Ola Lisowski discuss this report on News/Talk 1130 WISN: