Students saw small increases in proficiency on the Forward Exam, but decreases on ACT Plus Writing Exam

The results come from the Forward Exam, administered during the 2016-17 school year. This is the second straight year of the Forward Exam which is important because it is the first time in many years we can directly compare test results to the prior year.

Students fared slightly worse than the year prior in both science and social studies. Fewer than 50 percent of students scored proficient in both subjects.

School Choice Students Do Better In Every Category
Students enrolled in Wisconsin’s parental choice programs outperformed their public school peers in every category. 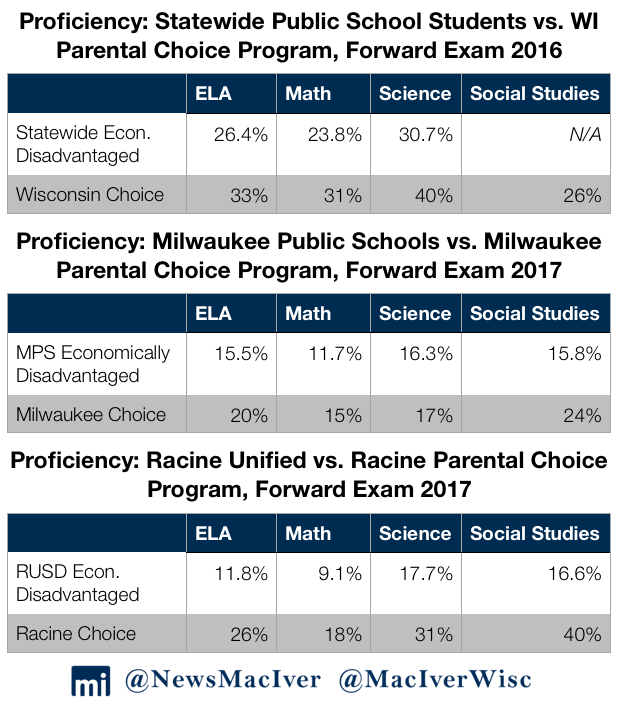 “All three Parental Choice Programs, comprised predominately of low-income students, outscored their full-income, public school counterparts across the entire state on the ACT for the second year in a row. Combined with the Forward Exam, these results highlight the continued success of the program,” Bender said.

“We’re seeing some positive student gains in the Forward Exam in English language arts,” Evers said. “Our educators and students are growing more comfortable with the test and have begun to use the information it provides to drive student improvement.” 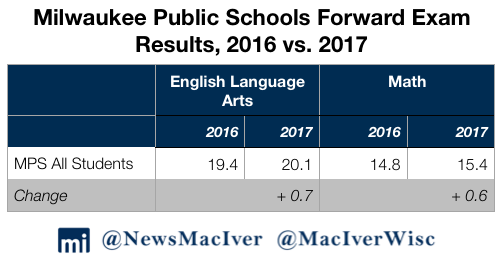 Those are small improvements, but improvements nonetheless. The math achievement gap among black and white students at MPS shrank slightly, from a 29.3 point gap last year to a 28.9 gap today. Still, just 8.4 percent of black students were proficient in math. The troubled district continues to underserve its students. 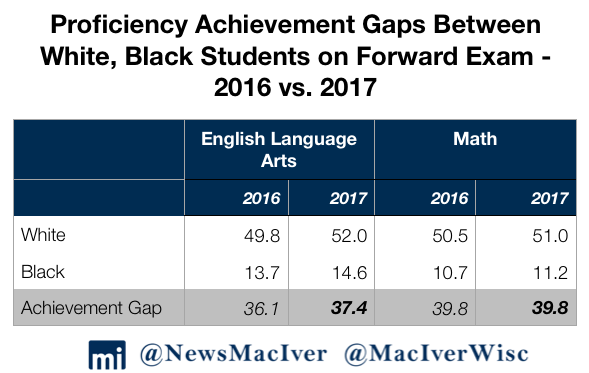 The scores are gleaned from students who participated in the Spring statewide ACT administration. This was the second year that the state picked up the tab to allow all high schoolers to take the ACT.

The ACT also includes its own benchmarks for proficiency which aim to translate the composite score into levels of readiness for college. Those benchmarks show that 39.3 percent of students scored proficient in English language arts, while 31.5 percent were proficient in science.

Perhaps the single bright spot in the entire ACT release – other than the increase in student participation – was that the percent of students proficient in math grew slightly. While the overall math score had fallen, 35.4 percent of test takers were dubbed proficient, up from 34.8 percent the prior year.

That a mere 0.6 percent increase in proficiency in a single subject was the highlight in this data release shows just how serious the situation is. Students in minority groups, as well as English learners and economically disadvantaged students fared consistently worse on this year’s ACT compared to last year. Among black students, the average composite score was just 15.5 of 36, compared to 15.8 last year.

The longer that students participated in Florida’s school choice program, the better their outcomes were. The scholarship increased college attendance among recipients by an average of 15 percent compared to public school peers. Students who participated in the school choice program for more than four years saw a 43 percent increase of college attendance compared to their peers.

In a statement to MacIver News, Bender said that the findings “mirrored those from Milwaukee.”

The data comes just over a month ahead of the release of Wisconsin’s new school report cards, which are expected in November.