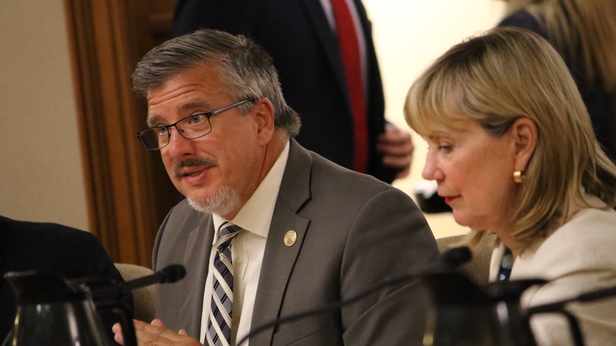 On a party-line vote (12-4), the Legislature’s budget-writing committee signed off on an earlier Republican-led Assembly bill, with several key amendments proposed by Senate Republicans.

The committee’s endorsement of the incentives package signals Senate Republican majority approval and sets up next week’s floor debate and vote in the upper house, now scheduled for Tuesday morning.

JFC co-chair Alberta Darling (R-River Hills), who has grown clearly more fatigued by the constant political doom and gloom of Democrats opposed to the Foxconn deal, spelled out the myriad projected benefits of investing in a Taiwanese tech giant that wants to build a massive new plant in Wisconsin.

“Wisconsin, you’re nuts if you don’t take this offer,” Darling said during the first leg of the finance committee’s lengthy executive committee meeting Tuesday. Darling’s aggravation with “all of the negativity” from JFC Democrats was palpable.

“…(A)ny party may immediately appeal as of right to the Supreme Court from any order of a circuit court vacating, enjoining, reviewing, or otherwise relating to a decision by a state or local official, board, commission, condemnor, authority, or department concerning” the Electronics and Information Technology Manufacturing zone (EITM), the amendment states.

The incentives package creates the special zone in southeast Wisconsin in which Foxconn expects to build a manufacturing campus said to be the size of 11 Lambeau Fields.

Democrats decried the amendment for bypassing state appellate courts and going right to the Supreme Court, which is controlled by conservative justices.

“You totally eliminate an appeals process in our court system,” Erpenbach said. “This is not about Foxconn anymore. This substantially changes the scope of the legislation.”

Chill out, JFC Republicans countered. The amended bill doesn’t abandon due process. It more immediately allows contested legal issues to be settled by the “court of last resort,” where many of these cases could ultimately end up anyway.

Committee Democrats also decried what they see as a lack of accountability and oversight in the Foxconn bill.

A Senate amendment requires the Wisconsin Economic Development Corporation (WEDC) to annually evaluate whether Foxconn is living up to its end of the bargain. The deal includes a potential $3 billion in tax credits – $1.5 billion total if Foxconn creates 13,000 jobs at an average annual salary of more than $53,000, $1.35 billion total in credits for capital expenditures, and another $150 million in sales tax exemptions for construction material purchases.

WEDC is supposed to “evaluate whether the corporation appropriately verified, in accordance with statutory and contractual requirements, the amount of tax credits eligible…”

But the bill doesn’t include specific benchmarks or clawbacks, Democrats charged, giving Foxconn a blank check for incentives.

That’s not true, countered committee Republicans. The incentives are performance-based, meaning Foxconn doesn’t receive the tax credits unless it creates jobs and builds the complex.

JFC Republicans got backup from the nonpartisan Legislative Fiscal Bureau, which reiterated that the only upfront cash the state would provide is the $15 million that could be used for development costs at the Department of Administration’s discretion.

Democrats could not be consoled.

“This is going to be a millstone around the state of Wisconsin,” Erpenbach said.

Darling reminded naysayers about the estimated $5.7 billion the Foxconn project is expected to create in construction spending, and the 10,000 construction jobs required to build the LCD panel campus. She noted a recent study that showed Foxconn’s Wisconsin operations would spur 22,000 indirect and spin-off jobs in Wisconsin.

Rep. Katrina Shankland (D-Stevens Point) criticized the bill’s failure to demand Foxconn hire Wisconsin workers first. She was reminded by the Fiscal Bureau that doing so would break several labor and commerce laws.

“I hear a lot of misunderstanding about the way manufacturing works,” said committee member Rep. Mike Rohrkaste (R-Neenah), who logged a long career in human resources in the manufacturing sector. He encouraged committee Democrats to visit a factory sometime.

And Rohrkaste took aim at committee Democrats’ constant criticism of tax credits going to a “foreign company” and to “foreigners.” It is an interesting position from members of a party that has blasted President Donald Trump for rhetoric about “foreigners.”

“Because Foxconn is a foreign company, that’s like a plague or something?” Rohrkaste asked rhetorically. “I don’t know if the people on the other side of the aisle understand the global economy we’re in right now.”

.@RepAmy31 calls out Dem ‘foreign corporation’ and ‘foreign workers’ talking points. “I don’t like where this is going” #Foxconn #wipolitics

The Senate has scheduled floor debate on the Foxconn bill for next Tuesday, the final stage before the bill becomes law with Walker’s signature. A memorandum of understanding signed by Gov. Scott Walker and Foxconn chairman and founder Terry Gou stipulated that an incentives package needs to be in place by the end of the month.

“We are moving forward with a once-in-a-lifetime opportunity for our state to change its trajectory for the next generation,” said Rep. John Nygren (R-Marinette), co-chair of the Joint Finance Committee.