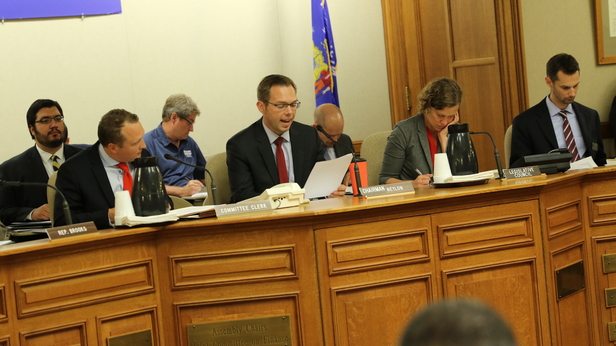 That was the unified message of dozens of public and private-sector officials – from Kenosha to Wausau – in testimony Thursday before the Assembly committee leading legislation on a $3 billion state incentives package for the “once-in-a-century” Foxconn Technology Group economic development proposal.

“Ladies and gentlemen, close this deal. Make it happen,” urged Tom Christensen, administrator of the Racine County village of Caledonia, which could directly benefit from Foxconn’s plan to build a $10 billion liquid crystal display manufacturing campus in southeast Wisconsin.

Waves of supporters testifed before the Assembly Committee on Jobs and the Economy during an all-day hearing that spanned deep into Thursday night.

There were critics to be sure, including the Wisconsin League of Conservation Voters and a “cannabis activist” who urged the committee to ditch Foxconn and subsidize the pot industry instead.

But the vast majority of those who testified laid out myriad reasons why they believe Foxconn would transform Wisconsin’s economy and why the state must act quickly to make it happen.

“The time to worry about Foxconn leaving is now,” said Tom Still, president of the Wisconsin Technology Council. “If this process takes too long, now is when they will leave. They will not leave after they’ve invested $10 billion.”

Secretary of Administration Scott Neitzel testified about the 10,000 construction workers who would be employed over the next four years, with an estimated $5.7 billion spent on construction over the period and an annual $1.4 billion spent in the supply chain. Neitzel also talked about the intangible human factors – personal connections formed during the negotiation process – that helped make the deal possible.

Tim Sheehy, president of the Metropolitan Milwaukee Association of Commerce, noted the estimated $15 billion in payroll over 15 years that Foxconn could bring to Wisconsin.

Wisconsin’s higher education community testified to what has been described as the “brain gain” the Foxconn project would foster.

Foxconn Chairman Terry Gou and Gov. Scott Walker have said Wisconsin universities and tech schools and the “talent pipeline” they create are a strong selling point for Foxconn’s decision to build its first high-tech manufacturing plant in North America.

While gushing at the potential, higher ed leaders took the opportunity to remind lawmakers that colleges and tech schools are going to require more money to create the programs and facilities needed to turn out the engineers and skilled technicians necessary to feed a massive workforce.

Asked if the university system would need more funding in this budget, Cross said now’s the time to make investments that will pay off in a few years.

“It takes us a while to turn a big aircraft carrier,” he said of the UW System.

Local government officials in Kenosha and Racine counties were unified in their support for an unprecedented economic development project expected to be located in their backyard. But they, too, urged the state to come up with the funding they’ll need to get Foxconn off the ground.

Kenosha County and city officials said the local governments involved should be included in any “clawback” provisions to recoup costs should the deal go bad. And they asked for changes to the tax incremental finance laws to include public buildings, such as fire and police stations. Foxconn isn’t merely building a plant; it’s constructing a city unto itself, to be situated on some 20 million square feet and populated by thousands of employees.

The bill puts state taxpayers on the hook for local development costs under a “Moral Obligation Pledge.” The Legislature would, if called upon to do so, pay up to 40 percent of the principal and interest of a local government’s obligations.

Neitzel and others who helped craft the incentives package assert it’s a “pay-as-you-grow” proposal, meaning Foxconn wouldn’t be able to collect on the tax benefits until they invest in capital – human and structural.

But critics insist there are better things Wisconsin could spend $3 billion on.

Kraig, in his usual bombastic way, hammered the Wisconsin Economic Development Corp., the agency charged with administering much of the economic development package. WEDC does indeed have a troubled past, particularly in tracking incentives and holding wayward firms accountable. Kraig said putting WEDC in charge of the incentives package is a “scandal waiting to happen.”

Citizens Action is a big advocate of expanded welfare benefits and other liberal causes.

“We often hear that we don’t have the resources to invest in health care and higher education, but when a multi-national company comes knocking we find $3 billion for them,” Kraig said.

Proponents of the bill say that kind of thinking is disingenuous at best. The return on investment, they say, is even more significant than the billions of dollars Foxconn would bring to Wisconsin.

“We could go from flyover to destination state pretty quickly because of this,” Still, of the technology council said.

Opponents testified that they fear the process is moving too fast. The Assembly introduced the bill Tuesday, scheduled a hearing two days later, and the Jobs and Economy Committee could vote on whether to move the bill along by early next week. There are, however, several more steps in the legislative process, not the least of which is action from the traditionally more deliberative Senate.

Mark Hogan, secretary and CEO of WEDC, said it’s important to secure passage by the end of September in order to meet Foxconn’s aggressive construction and production schedule.

“Foxconn is ready to go,” he said. “They would like to be hiring for some operations without even having construction in place.”

Environmentalists spoke in opposition to the bill’s provisions exempting some regulatory requirements from the project. The project loosens permit requirements involving wetlands and environmental impact statements, although the Department of Natural Resources testified that the bill only streamlines the regulatory process and limits duplication. The federal environmental requirements would be as rigorous as always, according to state agents.

But Jennifer Giegerich, of the Wisconsin League of Conservation voters, testified that her organization is concerned about the removal of wetlands, even though Foxconn would be required to replace 2 acres of wetlands for every acre it disrupts.

“We want to make sure our economy is as healthy as our air and our streams,” Giegerich said.

Madison resident Tammy Wood voiced a number of misgivings about the bill. Principally, Wood told the committee the state should be investing in a higher calling.

She said Wisconsin should put its money on pot, not Foxconn. Wood, vice chairwoman of the Progressive Caucus of the Democratic Party of Wisconsin, pointed to places like Colorado and the booming legal marijuana market.

“I know you’re passionate, but if we could stick to the bill and not the cannabis industry,” state Rep. Adam Neylon (R-Pewaukee), chairman of the Jobs and Economy Committee, urged Wood.

Reefer madness aside, supporters of the incentives package insist the time is now to positively affect Wisconsin’s economic future for generations to come.

The Foxconn deal “will provide significant dividends to the state of Wisconsin for years to come,” Neitzel said.