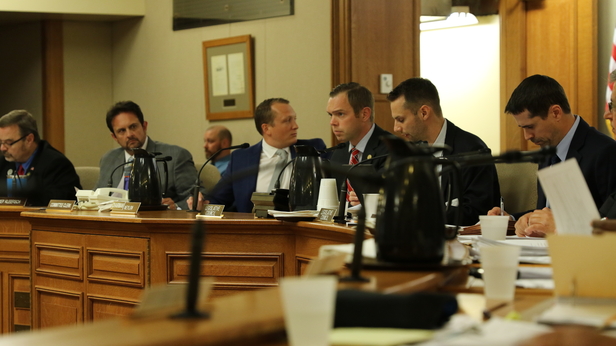 On Monday, the Assembly Committee on Jobs and the Economy passed an amended $3 billion incentives package – the largest in state history. The 8-5 party-line vote followed two and a half hours of committee discussion, mostly around 23 amendments to the bill put forward by Democrats on the committee earlier in the day.

“These are companies from other states coming here. Why? Because finally, the state of Wisconsin is becoming friendly to them coming here,” said Rep. Joel Kleefisch (R-Oconomowoc), citing other companies that located in southeast Wisconsin like Uline and Amazon.

“It will suddenly say to everyone else that Wisconsin is turning the corner in the new manufacturing field that Foxconn is going to produce, and we will be a destination site for the future,” Synder said.

Proponents describe the bill as a “pay-as-you-grow” incentives package.

In a Break-Even Analysis, the review projects the state wouldn’t begin making money on the Foxconn deal until 2042. The Fiscal Bureau notes such a timeline must be viewed cautiously, however.

Such caveats meant little to opponents of the bill, who cited the potential risk to taxpayers.

“Far too many questions have been raised about whether or not this project is good for taxpayers, a good deal for Wisconsin workers and contractors, and safe for our environment for me to vote yes today,” said Rep. Tod Ohnstad (D-Kenosha), the ranking Democrat on the committee.

The legislation exempts the Foxconn project from some DNR permitting requirements, such as wetlands review, and lifts the usual demand for environmental impact statements that has slowed previous larger-scale development projects to a crawl.

Supporters of the incentives package point out that the wetlands exemption, for instance, calls for more rigorous replacement standards, but opponents ignored that provision while criticizing the bill.

“We’re a state that takes pride in our natural resources, but yet in this bill you throw that all out the window. For a company to come in…you’re pretty much throwing everything that we believe in out the window for a company that, quite frankly, I don’t have a lot of faith in,” said Rep. Christine Sinicki (D-Milwaukee).

Ohnstad and other Democrats said the failure of their raft of 23 amendments – which were all defeated on party-line votes – was a sign the Republicans weren’t really interested in bipartisanship and a key reason for voting against the package.

The amendments would have mandated that a certain percentage of Foxconn’s labor force be veterans, imposed a $20-per-hour minimum wage for employees at the proposed facility, required the company provide health insurance to full-time employees, and beefed up the bill’s clawback language, among other provisions.

The bill is now expected to go to the Assembly floor Thursday, for what promises to be a lengthy debate before a vote.