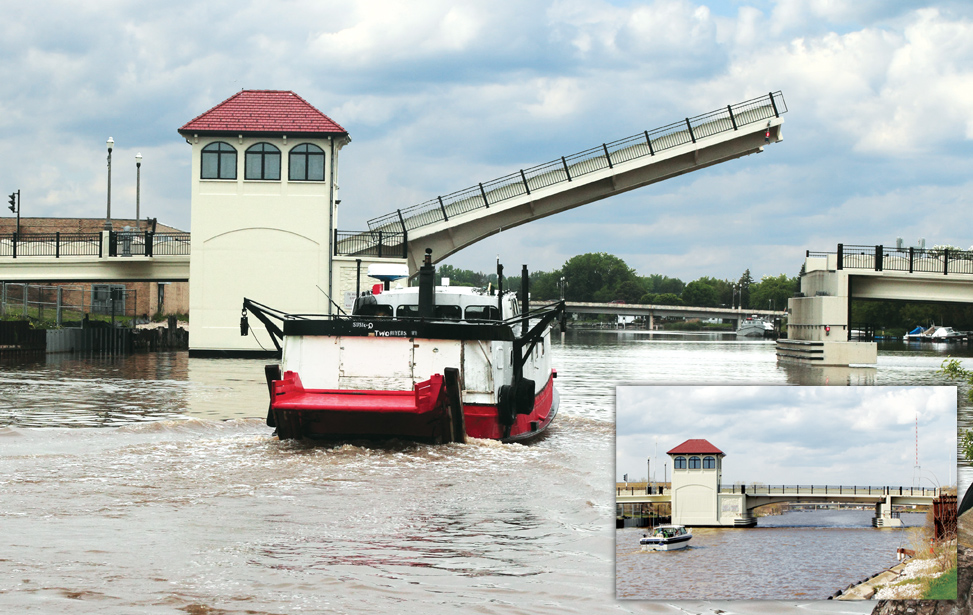 By M.D. Kittle and Tyler Brandt 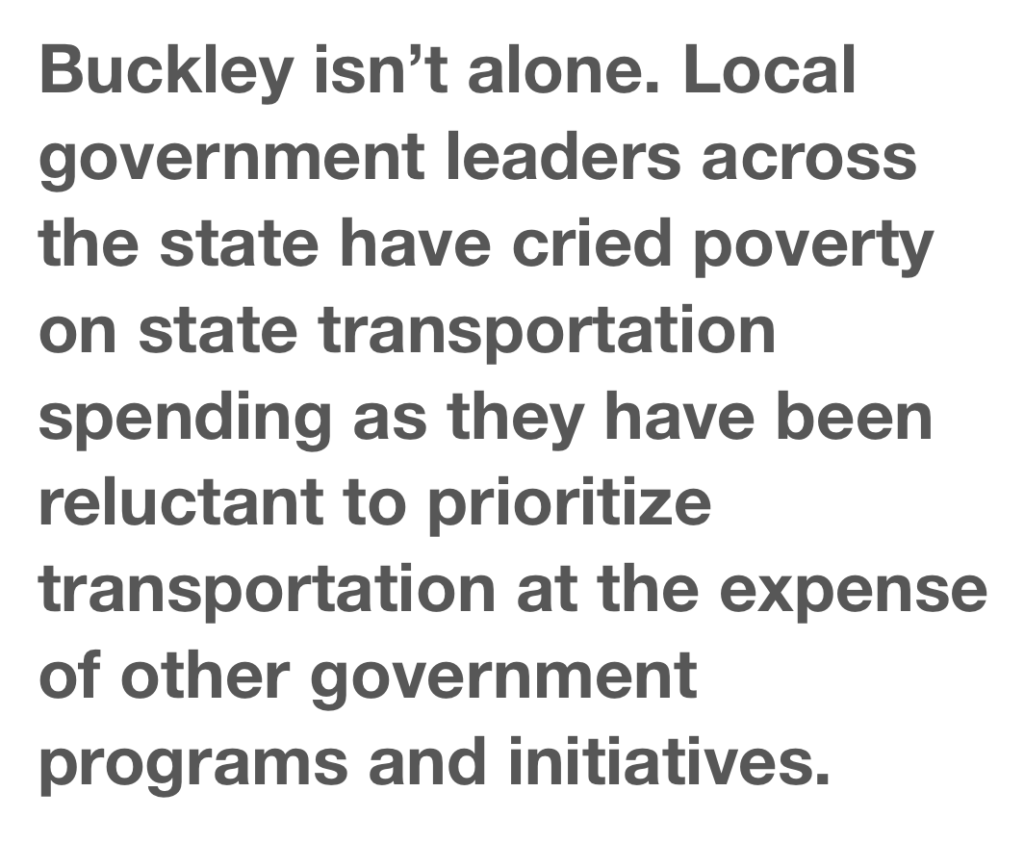 Buckley’s argument for the transportation lobby includes a very big but.

“I’m not suggesting Wisconsin needs to go hog wild with gas tax and fee increases. But the reality is that our state has a growing funding gap between available resources and infrastructure needs,” the government executive wrote in his column for the Transportation Development Association. “Major highway projects are getting delayed, and local maintenance and reconstruction efforts are inadequate.”

What’s the harm, Buckley argued, in asking Wisconsin motorists to pay a “little” more? Would “another 6 cents at the pump, in support of streets, roads and bridges, have posed an undue burden?” Buckley asked, pointing to the possible revenue that could have been raised had Wisconsin only kept the state’s comparatively high gas tax indexed to inflation over the past decade. After all, the city manager insisted, we either pay now or we will pay later – undoubtedly much more later.

Buckley’s opinion piece, penned on October 13, 2016, was at the very least prescient.

“With a new session of the Legislature and a new state budget process coming up, transportation funding is likely to be a hot topic,” he wrote.

But you didn’t need to be a soothsayer to see just how heated the transportation debate would be.

What is worth noting is the fact that Buckley made his pitch for more taxpayer-funded road money while his city shouldered a “debt service” level higher than most communities its size. The year before Buckley urged the Legislature to consider boosting taxes and fees to cover a disputed $1 billion state transportation budget shortfall, Two Rivers’ debt service on General Obligation debt topped $8.6 million, or more than one-third of the city’s budget.

The Manitowoc County city with a population of 11,712 residents was at 77 percent of its borrowing capacity of approximately $25 million, according to 2015 data obtained from the Wisconsin Department of Revenue. That was significantly higher than the 11 similarly sized cities included in a review by MacIver News Service. Platteville was second on the borrowing list, at about 63 percent of its limit. Cedarburg was the lowest that year, at 15 percent.

So what gives the administrator of a city carrying so much debt the fiscal authority to ask state drivers to pay more in taxes and fees to cover his city’s transportation needs?

Buckley said the 2015 figure, the latest available data from the Department of Revenue, is an anomaly. It reflects “about $6 million” in refinancing of existing debt for interest savings, sans changes to the repayment term, and $2.6 million in regular, scheduled principal and interest payments.

Buckley, however, concedes the city’s “normal” annual debt service payments, at as much as $3 million per year, “are as high as they are – although not outrageously high – in large measure because this city has “devoted significant local resources to transportation infrastructure improvements,” typically funded through debt. Most of the city’s borrowing has been on a 10-year schedule, an aggressive debt repayment schedule, according to the city manager.

“Two Rivers has made rebuilding its infrastructure a priority, and we have leveraged state and federal resources to the greatest extent possible, in addition to debt financing,” Buckley said.

The city has worked with the state Department of Transportation over the past two decades in replacing three bridges on state highways and several major highway segments in the community, Buckley said.

“During the extended local discussion of that project, we held several public meetings where the City Council and I looked residents straight in the eyes and said, ‘This will require new city debt, this project will raise your taxes.’  And, predominately, the community’s response was ‘let’s do it,'” Buckley said.

But was it necessary?

Traffic studies found a relatively new, four-lane Wisconsin Highway 42 bridge, just five blocks to the north, “could handle all vehicular traffic crossing the East Twin River,” the city manager said. Still, the council “and many local residents” got behind the “lift bridge or no bridge at all” project “in order to maintain a vital vehicular, bike and pedestrian link from our downtown to the City’s east side and Lake Michigan beach,” Buckley said.

The total project cost $14 million, according to the city, with the local share north of $3 million reflected in the city’s debt service payments. Buckley said the bridge, dedicated four years ago, should serve Two Rivers for 60 to 75 years.

If Two Rivers has prioritized transportation infrastructure as Buckley asserts, it’s nowhere near the premium the city has put on government operations and public safety.

According to MacIver News Service’s review, Two Rivers had 115 salaried city employees in 2014. That compares to an average work force of about 70 employees for like-sized cities. Two Rivers’ payroll in 2014 topped $6.5 million. The closest comparable city was Baraboo, which had 94 salaried employees and a payroll of nearly $4.9 million. The average payroll of the 12 cities surveyed was $3.95 million.

In 2017, Two Rivers spent 53 percent of its general fund on public safety, despite having lower crime rates than the state average. The average public safety expenditure percentage of the cities surveyed was 43 percent.

Buckley asserts Two Rivers’ percentage of public safety expenditures is “pretty typical among WI cities – especially those with full-time fire and EMS departments.” He noted the city takes in about $585,000 annually in ambulance revenue.

The city annually receives about $3.8 million in shared revenue.

Budgets are about priorities. Two Rivers has prioritized its government workforce, the generous wages paid to its workers, and police and fire protection in a relatively safe community.

And yet it could be argued that Two Rivers is asking motorists across the state to pick up a good part of the tab for its public works projects when the city’s spending priorities don’t include transportation, at least by comparison.

Buckley said he stands by his statement that more resources are needed to fund Wisconsin transportation, perhaps higher gas taxes or some new, mileage-based charges such as toll roads. He points to former Department of Transportation Secretary Mark Gottlieb’s call for the same. But Buckley failed to note the state audit that found hundreds of millions of dollars wasted in a DOT that failed to account for inflation in its project estimates and failed to seek competitive bidding for hundreds of big-ticket projects.

As the transportation spending PR campaigns roll on, the Republican-controlled Legislature remains at a standstill. Gov. Scott Walker’s budget proposal includes significant increases in state aid for local road maintenance, but he has rejected calls for tax and fee increases. GOP Assembly leadership has said tax and fee hikes are needed to keep major road projects on track, a position seemingly not supported by Senate Republicans. Meanwhile, the majority party in the Senate is kicking around $350 million more in transportation bonding than the governor’s $500 million, a position sharply criticized by Assembly Republicans like Rep. Jim Steineke, R-Kaukauna.

In his opinion piece last year, Buckley noted the possible savings that could be realized in myriad ways within the DOT, but he cautioned not to expect to close “a $700 million annual gap with cost savings alone.”

Perhaps before calling on taxpayers statewide to pick up more of the tab, communities such as Two Rivers should first try saving at home.