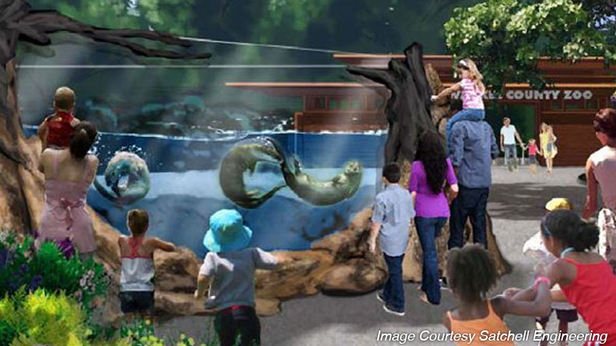 [Milwaukee, Wis…] The Milwaukee County Zoo is scheduled to open a new welcome center and otter exhibit this August on the west side of the grounds. While the zoo’s persistent push to improve its facilities and add new attractions to draw in more visitors is not surprising, what is surprising is where the almost $13 million in funding came from: the Wisconsin state transportation fund. 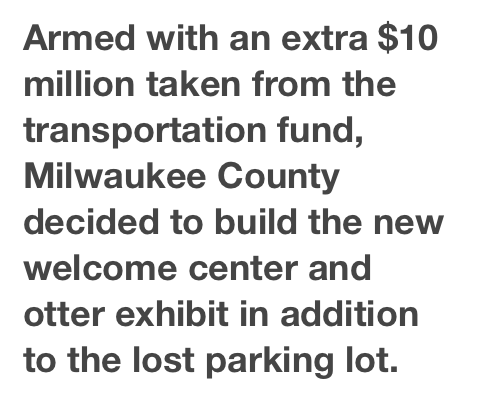 With the massive zoo interchange project, the DOT needed to acquire zoo land on the east side of the grounds to make way for their work. In 2014, the DOT took eight acres from the zoo, home to 700 parking spaces.

To compensate for the lost spaces, the DOT offered the zoo $8.09 million. The Milwaukee Business Journal reported earlier this year that the two were close to a deal. The agreement was for the state to pay $2.65 million for a new parking lot, $2.76 million for a welcome center, and $2.68 million for other infrastructure improvements.

Just before the deal was signed, zoo officials decided to back out of the proposed agreement and sue the DOT instead. The lawsuit was for $19.3 million. Long before that case was settled, the zoo went ahead and constructed a new 500 space parking lot on the west side of the grounds.

Before the case came to a jury decision, the two sides reached a private agreement, settling at $12.7 million.

Armed with an extra $10 million taken from the transportation fund, Milwaukee County decided to build the new welcome center and otter exhibit in addition to the lost parking lot.

On June 29, MacIver reached out to zoo, county, and DOT officials about the project. The questions were about the appropriateness of $12.7 million taxpayer dollars going towards the zoo and the zoo only constructing 500 spaces when they asked for 700. As of yet, nobody has responded.

While squabbling over the transportation fund continues, the $12.7 million lost is yet another roadblock. With a total estimate of $1.5 billion and a possible 2 year delay, another setback to the zoo interchange does nothing to soothe the transportation woes of the state.