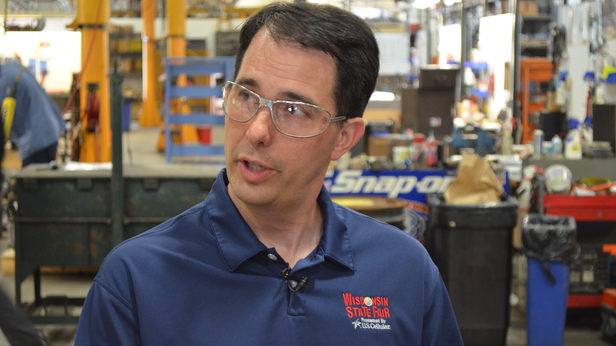 [Madison, Wis…] There’s been a lot of hoopla about Foxconn Technology Group’s White House announcement Wednesday that it plans to build a massive factory in southeast Wisconsin. And there should be.

But Foxconn’s proposed $10 billion development and the tens of thousands of jobs it is eventually expected to spur does not happen without three things:

– Conservative reforms over the past 6 1/2 years
– Wisconsin Republicans’ very prominent seats at the national political table
– President Donald Trump’s passionate pursuit to bring manufacturing jobs back to America, and his keen interest in vacant Kenosha land where a Chrysler/American Motors plant once stood.

Of course, $3 billion in taxpayer-funded incentives doesn’t hurt, either.

There’s been a lot of political bow-taking in the past day. Some deserve to. Some don’t.

Gov. Scott Walker and his fellow Republicans running the state Legislature truly have opened Wisconsin for business since sweeping into power in 2011. They promised and delivered on billions of dollars in tax relief, robust regulatory reform, and a pledge to restore power to taxpayers. Those reforms opened the eyes to business, that the Badger State is a place to expand and locate – not flee, as Illinois firms have been doing amid mounting state debt and record tax hikes.

Vukmir recalls the hostile days of Wisconsin’s Act 10 debate, when big labor and their friends on the left crammed the Capitol to disrupt Walker’s state collective bargaining reform initiative that has saved taxpayers billions and signaled to the world that reformers of big government meant business. Act 10 nearly cost Walker and several conservative senators their jobs. Their political survival emboldened conservative lawmakers across the country, convincing them that they could successfully challenge the bureaucracy status quo.

“I remember sitting in that room off the Senate chambers, just the Republican senators in our caucus listening to the vuvuzelas and the chanting and on and on and on,” Vukmir said. “There was so much pressure for us not to make the right decision. I remember standing up and talking to my colleagues and saying, ‘We cannot back down. If we do, no other state will consider doing the reforms we are trying to do here.'”

Those battles – and wins – put Wisconsin on the radar screen as “an epicenter of reform,” Vukmir added.

Walker calls the savings through “wise fiscal management” the “reform dividend.” Reform is paying off in myriad ways.

Wisconsin’s 3.1 percent unemployment rate in May was tied for the 7th lowest jobless rate in the nation, significantly lower than the national rate. And the state boasted the fifth highest employment participation rate. Private-sector wages soared 7 percent between September 2015 and 2016, among the strongest rates in a decade, according to the state Department of Workforce Development.

Earlier this summer, Chief Executive magazine rated Wisconsin as a top 10 state to do business. Not long before Wisconsin’s conservative revolution in 2010, the nation’s top chief executives ranked Wisconsin as one of the worst states for business, a state ladened with high taxes and stifling regulation. While the Badger State has a long way to go to improve its tax status (even troubled Illinois has a flat tax rate, although more than 1 percentage point higher as of this month, thanks to tax and spenders) conservative reforms have sent a powerful message.

“We have worked hard to get Wisconsin out of the worst states for business and into the top 10 best states,” Walker said in a statement. “We did it by cutting taxes, putting the power back in the hands of Wisconsin workers, and enacting common sense conservative reforms.”

For Walker’s critics who blast Walker for failing to hit his 250,000 new jobs goal he first campaigned on in 2010, the Foxconn deal is a breath-taker. Walker and his supporters have long said it would take time for their reforms to pay off. Foxconn, they say, is big proof positive

“Paul Ryan has said this over and over again, (that) we’re going to take the Wisconsin model and go national,” Vukmir said. “Paul Ryan is right. We have a huge opportunity here to take our reforms and emulate that on a national basis.”

And Priebus, regardless of the mainstream media’s five alarm reporting, still seems to hold considerable sway with Trump.

Priebus earlier this week told TMJ4’s Charles Benson that the idea to make Wisconsin a major player in the Foxconn deal began in April, following the president’s press event at Snap-on Inc. in Milwaukee. Trump and Priebus were flying over Kenosha, Priebus’ hometown, when inspiration struck.

“I saw my house. I pointed down to my house,” Priebus told Benson. “Then we got to the part over the city of Kenosha where the old Chrysler/American Motors plant was, and (Trump) said, ‘What is that? Why is all that land vacant?’ And I told the story about Kenosha and how it lost (the factory). And he said, ‘That land should be used.’ So, when Foxconn came into the White House, into the Oval Office, the president said, ‘I know a good spot you should go: That place in Kenosha.’ And then, all of a sudden, the conversation started and the governor came on board, and Walker has been doing a lot of work ever since.”

The story certainly fits with Trump’s “Make America Great Again” campaign pledge that helped get him get elected president in November, the first Republican to win Wisconsin since Reagan in 1984.

A big part of Trump’s slogan is underpinned by his “America First” push, a commitment to bringing jobs back to America.

The United States has seen the disappearance of 5 million manufacturing jobs since 2000, according to U.S. Department of Labor Statistics figures. Trump wants those back.

Earlier this year, the president worked out a deal with Carrier to keep its Indiana plant from shutting down. While the parent company has decided to move some 600 jobs to Mexico, it agreed to maintain the Indiana factory and retain 800 employees.

At a White House announcement Wednesday, Trump said the deal to bring Taiwan-based Foxconn to Wisconsin wouldn’t have happened without him.

“If I didn’t get elected (Foxconn) definitely wouldn’t be spending $10 billion … This is a great day for America,” Trump said.

There is much truth in that statement. Would a President Hillary Clinton bring arch enemy conservatives Paul Ryan, Ron Johnson, Scott Walker and Reince Priebus in on the Foxconn location conversations, even if the deal had come her way?

Trump and his administration say they have been in discussions with Foxconn executives for months. A senior administration official told the Washington Times that Wednesday’s announcement was the “culmination of many months of discussion” between the White House and Foxconn, the result of “numerous meetings” at the White House. The official said the company decided to invest in the U.S. due to Trump’s pro-growth agenda.

Business eyes opened when Trump, fresh in office, declared a moratorium on new federal regulations, and told federal agencies to identify costly regs for the chopping block. The president says he wants to hammer away at what the White House estimates to be at least $2 trillion in regulatory costs.

It’s a much different business climate than the previous eight years under President Barack Obama. A report by the Daily Signal late last year found that the Democrat imposed hundreds of billions of dollars in regulatory burdens on Americans, at an average cost of $1,300 per person, during his tenure. Hillary Clinton, who ran as Obama’s successor, campaigned on the same expanded-government policies.

The Foxconn deal, celebrated Thursday in Milwaukee by a host of political and governmental leaders, is massive by just about any economic development comparison. The tech supplier to Amazon, Apple and Google, plans to build a 20 million square-foot facility in southeast Wisconsin – the size of 11 Lambeau Fields. Ultimately, the tech giant is expected to create some 13,000 jobs on a $10 billion investment in the coming years.

The deal also comes with a hefty $3 billion incentives package, by far the largest Wisconsin has ever paid. About half would be targeted for capital costs, the other is tied to job creation. Walker said if Foxconn doesn’t hit the thresholds, it won’t collect incentives.

“When this investment is complete, Foxconn has the potential to create more manufacturing jobs than we’ve seen in many, many decades,” Trump said. “Foxconn joins a growing list of industry leaders who understand that America’s capabilities are limitless and that our workers are unmatched.”

As Walker and the rightful movers of the Foxconn deal do their victory dance this week, they are being joined by the usual tax-and-spend crowd more than willing to take a bow.

In an odd press release, the Democratic Party of Wisconsin blamed Walker for the deal while praising federal Dems, U.S. Sen. Tammy Baldwin and U.S. Rep. Mark Pocan, for “encouraging new economic activity in southeast Wisconsin.” These two ultra-liberals had nothing to do with the Foxconn deal. Their support and promotion of expensive government regulations and tax hikes have created the kind of environment that has for so long kept business away.

The same goes for guys like Milwaukee County Executive Chris Abele and Assembly Minority Leader Peter Barca (D-Kenosha). Barca, by his very position as a Kenosha representative, is a cheerleader for the development deal, but the Democrat has at every turn attempted to thwart the kinds of government reforms that caught Foxconn’s attention. Abele may have been involved in the periphery, but his leadership is a legacy of failed liberal, job-killing policies.

The real credit for landing this “once-in-a-century” deal are the people who said to do business, Wisconsin must be open for business. That means more than political platitudes and empty promises, and it certainly doesn’t mean growing government and class warfare platforms. It’s the Wisconsin model, and the rest of the nation is learning its powerful impact.