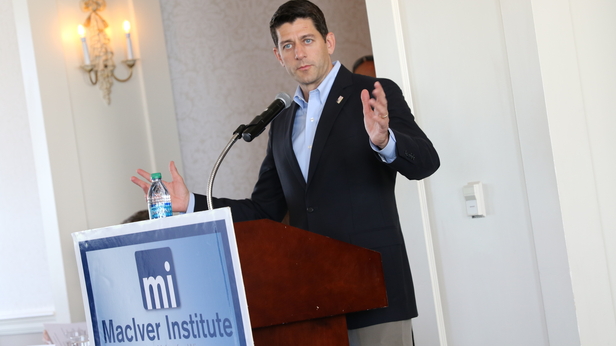 The Janesville Republican has long been comfortable in his role as “policy guy,” a policy wonk with a sincere appreciation for the notion that while numbers can be spun, they don’t lie.

“Here,” of course, is his job as Speaker of the House of Representatives, a position that comes with incredible power and unending pressure.

These days, Ryan spends a fair amount of time reminding his conservative colleagues on Capitol Hill of the covenant they made with the people who voted for them in November- the people who gave Republicans rare control of both houses of Congress and the White House.

Those voters did so premised on promises – that Republicans would at least begin to rein in a federal government that became more centralized and grabbed more and more power from states and citizens during the Obama Era. That means getting rid of Obamacare, reforming bloated entitlement programs, delivering on tax cuts, and removing the yoke of regulation from the shoulders of business, workers, and consumers.

The results to date have been mixed.

While the House narrowly passed a sweeping health care bill aimed at replacing the Affordable Care Act, former President Barack Obama’s signature and imploding health care law, it has been a bruising, bitter battle that remains far from resolved in a Senate with little margin for defection.

Republicans have had much more success on regulation reform.

While the nation’s attention last month was on former FBI Director James Comey and political theories of Russian collusion, the GOP-led House passed a bill killing the Dodd-Frank regulations implemented during the Obama administration. Free market advocates say Dodd-Frank has strangled economic growth as it has preserved the much-despised notion of “too-big-to-fail” and the big taxpayer-funded bailouts of financial institutions that have followed.

“No one knows we did this,” Ryan said of the passage of the Financial Choice Act last month. “James Comey was testifying (before the Senate Intelligence Committee) a month ago on the same day we passed the repeal of Dodd-Frank.”

Ryan, by all accounts, runs a tight ship. He said the Republican-controlled Senate needs to keep its end of the bargain and pass an Obamacare replacement measure so that Republicans can keep its ambitious agenda rolling and on schedule.

“We’re knee deep in tax reform now,” he said. “We want to get that going by fall.” The White House and Senate have been working on the details of a tax cut package, the speaker said, with the intent to launch something by September.

As Obamacare continues its death spiral, Ryan has tirelessly pitched a GOP plan reforming Medicaid, the health care program covering low-income Americans and people with disabilities. The idea is to move from an open-ended entitlement into a program with federal payment caps on a per capita basis or through block grants to states.

“This is a tremendous entitlement reform, a huge opportunity we can’t let slip through our fingers,” the speaker said.

Conservatives have the opportunity to do what they have long said they wanted to do, and Ryan says he’s been trying to drive that point home to some reluctant members. Perhaps his message is a hard sell for politicians who have grown accustomed to the comforts of congress.

“It’s confusing a few members of Congress. I’m trying to convince people. I tell them, ‘You may lose your seats, but it’s worth it,'” he said.

It’s a tough question for some, Ryan said, but didn’t they come to Congress to change the system, to go big, go big, or go home?

For the more timid, Ryan points to his home state, where Republican Gov. Scott Walker and the GOP-controlled Legislature have gone big and bold on government reform – and voters have rewarded them for their efforts. In six-plus years, Republicans have returned power to taxpayers through the Act 10 reforms to the state’s public sector collective bargaining law.

Act 10 has saved state and local governments north of $5 billion, according to a MacIver Institute report. Walker and his fellow conservatives have made good on promises to cut taxes and reduce Wisconsin’s high-tax-state ranking. And they have implemented scores of regulatory reforms aimed at making Wisconsin “open for business,” as Walker likes to say.

It certainly wasn’t easy. Walker, his lieutenant governor, Rebecca Kleefisch, and several Republican senators had to fight for their political lives in a 2012 recall campaign driven by Democrats and their big labor allies. Walker and GOP lawmakers faced a barrage of protests and demonstrations, even threats on their lives.

But they persevered, said tax-cut crusader Grover Norquist. More so, they instilled courage in conservative leaders around the country.

“When Scott Walker and the Legislature took on all the unions, that made it possible for other governors and congressmen to do the same,” Norquist, founder and president of Americans for Tax Reform, told MacIver News Service. “Every time you get it right in Wisconsin you are getting it right for others who can follow the lead of Wisconsin.”

Ryan said he’s brought Walker in to meet with some of his congressional colleagues. The governor has told the war stories of the conservative policy battles, accompanied by “B-roll” of the hostile protests, Ryan said. Many of the same left-wing driven scenes have played out during the opening days of President Donald Trump’s term.

“The vast majority of the country aren’t them. That’s just the loud people,” the speaker said. “I sincerely believe that if we get our work done, because we do believe in what we believe, good things will happen as a result of it. If we keep the covenant with the people who elected us we’ll be fine in 2018. If we don’t, we won’t.”