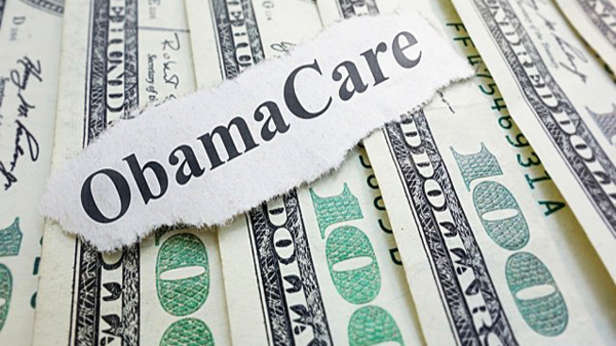 Boulton notes that Wisconsin’s individual insurance market remains “somewhat in flux,” because of Obamacare. That’s the kind of language you’d expect in a press release from the Obama HHS, not an honest and balanced analysis of Obamacare’s worsening problems. 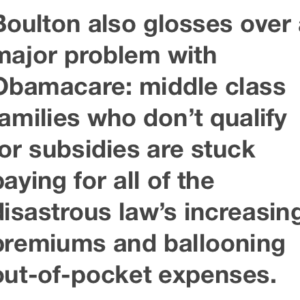 Wisconsin’s Obamacare market lost an average of 1.39 insurers per county from 2016-2017, according to a MacIver analysis of data from the Office of the Commissioner of Insurance. Fourteen Wisconsin counties have just one or two insurance companies offering Obamacare plans in 2017. Between 2014 and 2016, the number of insurers offering plans on Wisconsin’s individual insurance market has dropped from 54 to 41 – a 24 percent decline, according to OCI data.

The exit of more major insurers in 2017 doesn’t bode well for next year. Aetna and Anthem Blue Cross/Blue Shield announced earlier this year they would join Humana and UnitedHealth in completely withdrawing from Obamacare’s exchanges. That’s four out of the five largest insurers in the United States that have abandoned the former president’s rapidly sinking law.

In 2013, before Obamacare took effect, a remarkable 87 percent of Wisconsinites had health insurance. For those with pre-existing conditions, Wisconsin’s Health Insurance Risk Sharing Plan, or HIRSP, offered a solution.

“HIRSP provided Wisconsin consumers with peace of mind by providing high quality, comprehensive coverage to over 20,000 of our friends and neighbors,” but Obamacare squeezed the successful program out of existence, wrote Wisconsin’s insurance commissioner Ted Nickel.

Wisconsin’s health insurance market wasn’t broken before 2013, but Obamacare tried to fix it anyway. It introduced into Wisconsin the idea that a government mandate could force people to buy a bloated health insurance plan they don’t want. The predictable result is healthy people opting out, an imbalance in risk pools teeming with the least healthy, most expensive individuals, massive losses by insurers, and their withdrawal from the market.

Boulton also glosses over a major problem with Obamacare: middle class families who don’t qualify for subsidies are stuck paying for all of the disastrous law’s increasing premiums and ballooning out-of-pocket expenses.

Obamacare proponents constantly point to the number of people who are at least nominally insured because of Obamacare. Repeatedly, Boulton implicitly conflates health insurance coverage and access to health care, a fallacy that pervades the health insurance debate. 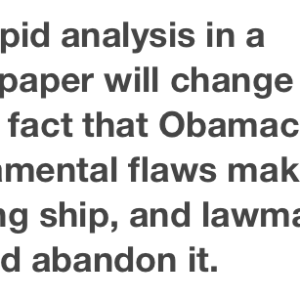 What good is having insurance, subsidized or not, if your deductible is so high that you’ll go bankrupt anyway?

As costs for the overall Obamacare system explode, taxpayers are also taking it in the teeth. We were promised no family making less than $250,000 would see a tax hike. In reality, Obamacare saddles the middle class with 18 tax hikes, penalties, and fees.

Obamacare also established a network of nonprofit health insurance co-ops, including Wisconsin’s Common Ground, to supposedly provide more competition in the marketplace. Problem is, these Obamacare nonprofit businesses are drowning in debt. Taxpayers forked over $1.7 billion to set up these shops around the country and even more to prop them up.

These state-based health insurance co-ops have been a failure. To date, all but four have closed shop. Common Ground survived 2016 thanks to a mysterious cash infusion, but it has lost at least $84.8 million and owes the federal government $107.7 million. It’s unlikely taxpayers will see much or any of that money repaid.

As a solution to patching up Obamacare, Boulton lists two suggestions. First, he’d like to see “a reinsurance fund to cover very high medical claims.” But if a new pipeline of taxpayer money to prop up giant insurance companies is the left’s answer, then “progressivism” is not what it used to be.

Another solution Boulton lists makes some sense – “allowing insurers more flexibility in designing their health plans, enabling them to offer lower-cost plans with fewer benefits that would appeal to more to people who are healthy,” suggested health care consultant Karen Bender.

It’s unfortunate that the idea of allowing insurers to provide greater choice comes across as a sensible suggestion in the current debate. Allowing choice should be a total no-brainer, but the law’s myriad mandates eliminate choice in all facets of health care, from the consumer to insurers and providers.

Obamacare can’t be patched up. Every syllable of the law should be repealed and replaced by market-oriented reforms that minimize government’s role in health care, create price transparency, and let doctors, patients, and employers work out arrangements that suit their own unique situations.

No tepid analysis in a newspaper will change the basic fact that Obamacare’s fundamental flaws make it a sinking ship, and lawmakers should abandon it.