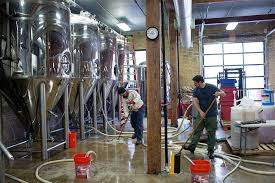 [Madison, Wis…] – As lobbyists and lawmakers consider tightening up what some distributors have described as the “Wild West” of Wisconsin’s three-tier codes and laws, meet William Glass – the face of Wisconsin’s archaic and restrictive alcoholic beverage regulatory system.

Glass, a Marine Corps veteran turned entrepreneur, nearly lost it all in a trying battle with state regulators.

In his pursuit of his version of the American dream, owning an Eau Claire-based craft brewery, Glass said he and his wife contemplated dissolving their marriage in order to save his business.

It wouldn’t have mattered.

Nothing short of severing custody of his kids would have appeased state regulators in their reading of what many see as a draconian Prohibition Era law that has latched a lock on the free market and small business in the name of stopping monopolies.

“It’s pretty disgusting but, unfortunately, that’s the situation we found ourselves in,” Glass said.

The Wisconsin Department of Revenue, charged with enforcing the law that established the three-tier system of distributing alcohol, says the law is the law.

“State statute is clear on the separation of production, distribution, and retail sale of alcoholic beverages,” Nicole Anspach, spokeswoman for the Department of Revenue, told MacIver News Service in an email Monday. In short, the law prohibits brewery owners and other manufacturers of alcoholic beverages from having “any direct or indirect interest” in licensed establishments selling booze. At least Chapter 25 of the statute “contains numerous provisions which prohibit relationships between the tiers.”

But Glass says the department took “indirect interest” to an extreme level.

When Glass finished active duty in 2009, the recession was hitting hard. He took a job at MillerCoors while going to school for entrepreneurial management at the University of Wisconsin-Eau Claire.

“I always had this kind of bug in me that I needed to work for myself. It might have been (the result of) a few years of working through the military bureaucracy, but I knew I only wanted to answer for myself,” Glass told MacIver News last week on the Dan O’Donnell Show on NewsTalk 1130 WISN in Milwaukee.

So he and his wife went in with a couple of investors to purchase a failing tavern in downtown Eau Claire. Glass said they turned it into one of the best craft beer bars in the state.

But this entrepreneur was bored. Selling beer wasn’t his cup of tea. He wanted to brew craft beer, and had a passion for it. It seemed like “the next logical step from being a bar owner.”

The Brewing Projekt, with a mission “to create damn good beer,” was born.

How to transition was the problem. How to do so within Wisconsin’s prohibitive three-tier system was the real trick.

In general, state law aims to keep alcoholic beverage makers, wholesalers and retailers, including restaurants, bars, and liquor stores, out of each others’ businesses.

Glass’ attorneys advised that he and his wife draw up a marital property agreement legally separating Glass from the tavern. His wife, who understandably did not want to give up the successful business she had built, became sole owner of the establishment. Her husband had no legal interest in it. Glass would be free to pursue his brewery project without “branching tiers” and running afoul of the “interest” clause.

At least that’s what he was told by a representative of the Department of Revenue.

Things were looking good. Glass went through the arduous process of obtaining a separate federal license from the Alcohol and Tobacco Tax and Trade Bureau. The TTB enforces the Federal Alcohol Administration Act, “to ensure that only qualified persons engage in the alcohol beverage industry.”

But after a few months, Glass still hadn’t heard back from the state Revenue Department on a final decision. After some prodding from the governor’s office and a couple of legislators, the entrepreneur finally got an answer from the agency.

“What we found out was that they (DOR) weren’t going to grant us the license,” Glass recalled. The agency quoted a 1972 opinion from the state’s attorney general. Because Glass and his wife were married, their relationship breached the prohibition on mixing two tiers – in this case, the manufacturer and the retailer. It did not matter that they had legally separated their business assets. It didn’t matter that a DOR agent previously had said doing so would make them compliant.

The law is the law.

“So we were desperate at this point,” Glass recalled.

He said he had spent every penny he had – north of $200,000 – in working through the regulatory and planning phases.

“We were panicked,” Glass said. “We’re trying to start this business and now the state is telling us something different than what they told us a couple months earlier.”

Glass and his wife discussed getting divorced to free up their regulatory entanglement. It wasn’t a matter of a failed relationship. Glass said he and his wife love each other with or without a marriage certificate. It was fear that drove them to even considering ending their marriage, Glass said.

But dissolution of a marriage wasn’t enough for the regulator.

Glass asked agency officials point blank: If he got a divorce, would that be enough to satisfy the three-tier law? The answer was, no. The couple would still have a fiduciary connection because they have children. Child support payments presumably could be used to support business interests – a prohibited branching of tiers.

Glass said he and his wife were put in the untenable position of giving up custody of their children to pursue their small business dreams. Not a chance.

“It’s a whole different story when you start talking about your kids,” he said.

Glass said his father, a 69-year-old retired sheriff’s deputy/investigator for Chippewa County, offered to take over ownership of the brewery.

They went back through the federal regulatory process, what Glass described as “quite a proctological exam.”

“Keep in mind we’re racking up overhead costs this whole time,” he said. “We had a lease on the building, we’re making business payments. We’re still trying to keep our heads above water.”

They resubmitted the application to the Department of Revenue. Again, a few weeks passed without an answer.

Finally, a letter arrived. Once more the agency rejected the license application. Why? Glass was listed on the document as a management employee.

“They tell me I legally can’t work for the brewery and they won’t issue a license to the brewery because I’m requesting to work for what is legally and essentially my father’s business,” he said.

Glass then had his name removed from the application. The applicants went back through the federal paperwork, and then back to the DOR. Again, more delays. Eventually, Roger Johnson, who at the time administered the state’s liquor laws, personally called and said the application looked good but…

The brewer’s wife just happened to work as a waitress at a downtown Eau Clair bar, so the state still couldn’t issue the license. The waitress would have “undue influence over consumers’ purchasing habits,” was the explanation, Glass said.

“That’s just how far in this goes. We were just beside ourselves,” he said. “The supposed idea is that we are going to set up a monopoly because one of the employees of this brewery has a wife who sells beer and liquor part-time from behind a bar a mile and a half away, that was good enough reason for them to shut us down.”

The waitress ended up leaving her job so that her husband could take the brewer position and the brewery could finally be released from the shackles of regulation.

The Brewing Projekt’s story may be the most extreme impact of the three-tier system, but Glass is not alone in his regulatory struggles.

Like Minds Brewing in Milwaukee was forced to move the business to Chicago in 2015 because of the so-called “tied house” laws within the three-tier system. Rep. Dale Kooyenga, R-Brookfied, intervened and the Department of Revenue found that breweries are allowed to hold an “indirect interest” in a restaurant with a Class B liquor license.

Now Wisconsin’s craft brewers, distilleries and wineries, among others, are pushing back against a proposal that would tighten up the three-tier system and create an “alcohol czar” to enforce the law.

“Once people from the wine and beer wholesalers explained the proposal, the group almost came together for the most part,” Swearingen told MacIver News.

Glass and other members of the Craft Beverage Coalition had a different takeaway. They worry the proposed changes will only serve to fully stifle entrepreneurism and kill competition.

The proposal appears to be the latest move by distributors to alter the system to their benefit, critics say. In 2015, the Distilled Spirits Council of the United States sent Gov. Scott Walker and lawmakers a letter noting concerns about a “covert attempt by a wine and spirits wholesaler to slip a provision into the budget that will further tighten its monopoly control over the Wisconsin alcohol beverage market.”

The proposal involved making distributor contracts bound by perpetuity, no matter a transfer of ownership.

“The supplier’s responsibility and objectives to provide a broad range of brand choices to consumers efficiently and competitively are eliminated by this legislation. For the retail tier, noncompetitive wholesalers translate into higher prices and less services to retailers,” the letter stated.

Distributors contacted for this article did not return phone calls and emails.

Glass said the three-tier law is in desperate need of reform, but not to carve out more protection for special interests.

As the law stands today, being married to someone locks would-be entrepreneurs out in the name of protecting the tiers. The proposed changes strike another blow to the free market, Glass said.