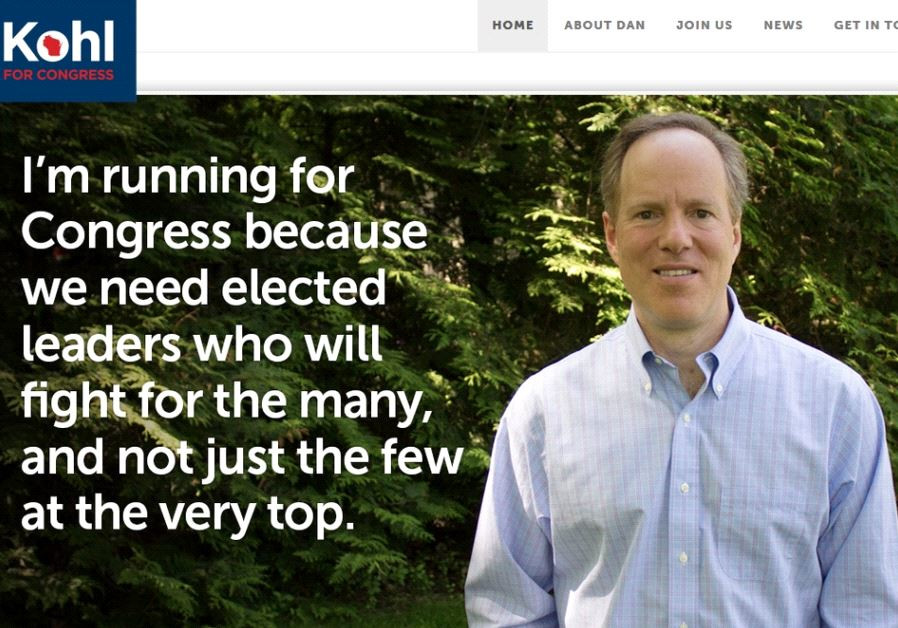 Kohl, nephew of former Democratic U.S. Sen. Herb Kohl of Milwaukee, faces perhaps a more daunting challenger in a district that has voted for conservative House members since 1964: his left-wing past.

The Milwaukee Journal Sentinel earlier this month described the 51-year-old liberal as a “businessman and non-profit leader.”

According to the Democrat’s official biography, Kohl joined Washington, D.C.-based J Street as vice president of political affairs in 2009, not long after the launch of the political action committee.

Kohl’s bio says he was “seeking to reground American foreign policy in the wake of the Iraq War.”

J Street also has deep roots in Kohl’s home state (although the nascent politician hasn’t voted in Wisconsin since 2009, according to state voting records). The organization has offered full-throated endorsements of and generously given to U.S. Sen. Tammy Baldwin (D-Madison), and U.S. Reps. Ron Kind (D-La Crosse), Gwen Moore (Milwaukee) and Mark Pocan (D-Madison), but more on that in a moment.

J Street is a pusher of a two-state solution to the Israeli-Palestinian conflict, and a vehement supporter of Obama’s Iran nuclear deal. The latter has found diminished support in the United States, with some 30 percent approving in February 2016. That number is less among conservatives, who make up the majority of voters in the 6th Congressional District.

J Street was the largest beneficiary of the Ploughshares Fund, with an ostensible mission to eliminate the nuclear weapon stockpiles. Ploughshares is backed by liberal billionaire and sugar daddy to left-wing causes George Soros. So is J Street, which took in $575,000 in grants that funded advocacy for the Iran nuclear deal.

“J Street and Ploughshares were part of a loose coalition of groups that coordinated strategy on building support for the Iran deal since late 2013, occasionally consulting with the White House,” according to the Jerusalem Post.

Kohl also was a member of the J Street board of directors.

While the JStreetPAC has denied supporting the radical Boycott, Divestment, and Sanctions (BDS) movement, J Street has lent its blessing to groups and individuals heavily involved in the campaign to punish Israel. In 2015, J Street worked with other left-wing groups in opposing a bipartisan congressional measure that rejected the anti-Israel campaign.

“J Street has repeatedly come under fire from pro-Israel voices and members of Congress for its efforts to undermine Israel and delegitimize its current leadership,” according to the Washington Free Beacon.

“If elected to Congress, Dan will work strenuously to maintain support for Israel’s security, oppose efforts to delegitimize Israel and impugn its Jewish and democratic character, stand behind the two-state solution, and prevent a nuclear-armed Iran,” Coelho said in an email response to MacIver News Service’s questions.

The spokesman said Kohl, who lives in Mequon, left his position with J Street as Vice President of political affairs in 2012.

“Dan has been involved in the organized Jewish community for some time,” Coelho said, directing MacIver News to an Israel Position paper “that underscores (Kohl’s)strong support for Israel, and involvement in the community.”

The political action committee likes to boast about its success in the arena of politics. It is merely a financial spigot for liberal causes and Democratic Party candidates.

“In 2016, JStreetPAC distributed a record $3.6 million to its 124 endorsed candidates for Congress, making it the largest pro-Israel PAC for the fifth cycle running,” the organization boasts on its website. All 124 candidates, coincidentally, are Democrats. J Street bragged that 99 percent of its endorsed members of Congress won re-election and “not a single Iran deal supporter was unseated by a deal detractor.”

Grothman is a vocal critic of the deal.

“This deal paves the way for an Iranian nuclear weapon and rewards the world’s leading state sponsor of terrorism with sanctions relief,” the congressman said in 2015. The Republican easily won re-election last year with 57 percent of the vote. His closest opponent won 37 percent.

But Grothman’s potential opponent next time around comes with more money and the gift of a well-known political name. Dan Kohl worked for his famous political uncle for 13 years, during Sen. Herb Kohl’s tenure as owner of the Milwaukee Bucks. The younger Kohl served as assistant general manager of the team.

It’s safe to assume J Street will be at least as generous with one of its former leaders as it has been with the other political liberals it has graced with bundles of campaign cash.

Sen. Tammy Baldwin, for instance has taken in more than $130,000 from the the JStreetPAC in federal campaign contributions, her fifth largest contributor, according to the Center for Responsive Politics.

J Street has gotten some return on its investment.

As MacIver News Service reported earlier this month, Pocan was identified as the congressional member who anonymously reserved space on Capitol Hill for an anti-Israel forum. Pocan, according to the Free Beacon, failed to show up for the forum, titled “50 Years of Israeli Military Occupation & Life for Palestinian Children.”

The liberal congressman has been an unapologetic supporter of organizations viewed as not simply anti-Israel but anti-Semitic by mainstream Jewish groups.

“Pocan, a supporter of the liberal Middle East advocacy group J Street, has come under fire in the past for meeting with convicted terrorist associated with the Popular Front for the Liberation of Palestine, a terror organization,” reporter Adam Kredo wrote. “Since the Free Beacon first reported on the event–which many have described as a propaganda effort meant to defame the Jewish state–pressure has been mounting for the anonymous congressman behind the event to step forward.”

Kohl in a press release announcing his campaign said he couldn’t “remember a time when people in this country were so anxious about the present and so concerned about their futures and their children’s future.”

He blamed Grothman for that, claiming the congressman “puts his party’s priorities ahead of our priorities.”

Kohl, who helped lead one of the more left-wing and powerful lobbying groups in the nation, said the 6th Congressional District is represented by “the single most partisan member of the House…”

Alec Zimmerman, spokesman for the Republican Party of Wisconsin, asserts Kohl and Wisconsin’s Democratic members of Congress are putting the nation’s security on the line in supporting dangerous ideas pushed by J Street.

“Whether it’s Senator Baldwin, Rep. Pocan, or candidates the voters have already rejected like Dan Kohl, it’s clear that Democrats are sticking up for big-money Washington special interests instead of Wisconsinites,” Zimmerman said. “Bottom line: Wisconsin Democrats are putting the dangerous agendas of groups like J Street ahead of the safety of hard-working Wisconsin families, and it has to stop.”