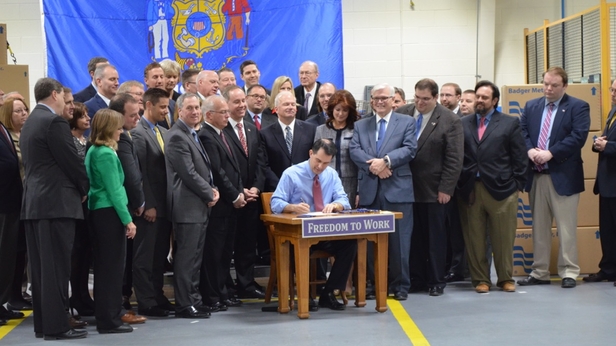 A MacIver Perspective By M.D. Kittle

[Madison, Wis…] – Capitol Democrats have become so irrelevant – like the Whig Party of 1855 – that Republicans these days seem to have no one to fight with but themselves.

And it’s gotten bigger than the occasional political bickering.

Gov. Scott Walker took to Twitter last week threatening to veto any budget his fellow Republicans on the Joint Finance Committee craft that includes a gas tax or a property tax increase.

“Let me be clear, I will veto the entire budget if it includes an increase in property taxes for homeowners,” the governor tweeted Monday morning.

Walker and Assembly Speaker Robin Vos (R-Rochester) went at it earlier this year on Twitter. Vos has pushed all options in funding a troubled transportation budget, including a gas tax hike and vehicle registration fee increase; Walker has rejected any notion of tax increases in an era of budget surpluses. Vos has threatened to delay the biennial budget, due in a little over a month, over road funding.

Rep. John Nygren (R-Marinette) co-chair of the Legislature’s budget-writing committee, last week complained that a few Senate Republicans were trying to “railroad the process” in coming to terms on another tuition freeze in the University of Wisconsin System.

On Wednesday, Walker joined the GOP Assembly in a closed caucus to chat about growing differences. Capitol insiders tell MacIver News Service there was some displeasure expressed about Walker’s recent pointed tweets, and the governor wants it understood he means to hold the line on property tax increases.

But signs of detente broke through by Thursday, before the Joint Finance Committee executive session. Nygren told the Capitol press corps that there aren’t any hurt feelings and that the private sit-down with the governor was quite productive. Face-to-face conversation is preferable to hashing out hashtag differences on social networks, Nygren said.

Walker seemed to be offering an olive branch Friday morning. He told conservative talk show host Jay Weber on NewsTalk 1130 in Milwaukee that the caucus talk involved everything from the gas tax and the transportation budget debate to differences over ending the state forestry mill tax.

He said he has great respect for his Republican colleagues in the Legislature and what they have been able to accomplish this budget-dominated session so far. He compared Republicans to a family. Like every family, there are bound to be some disagreements, Walker said. And this family still has some disagreements.

“I fundamentally believe that property taxes should continue to go down,” he said, pointing to his pledge that property taxes would be lower each year he’s in office. “I want to make sure we have a good, decent, safe transportation system, but I believe we can do that without a gas tax or vehicle registration fee.”

Weber on Thursday touched on the internecine battles within a Republican Party that has been so successfully united for six-plus years in Wisconsin. Weber reminded his listeners that, for the most part, Republicans are arguing about how much to cut taxes and regulations – a good thing for taxpayers; a remarkable thing after years of Democratic Party control and arguments about how much to raise taxes and regulations.

But this session has given rise to some tax hike-minded Republicans. Talk of gas tax and vehicle registration fee increases is anathema to fiscal conservatives who say they can’t go there. And Walker told Weber there are some Republicans who don’t want to give up the forestry, state property tax, as the governor has proposed in his budget. Doing so would ease the burden on taxpayers by $180 million over two years.

“Some (Republicans) … in the Capitol are saying, ‘You get rid of this (tax) you never have the revenue, it never comes back. My argument in caucus and elsewhere have been, ‘Yeah,'” the governor said. “As Republicans, we aren’t about short-term tax relief. We are trying to fundamentally reform the way we provide government services, do something that is more effective, more efficient, more accountable. And part of that is making sure that after we’re gone people can’t jack up taxes and this is one way to make that happen.”

It’s that taxpayer-first philosophy that has carried the day for fiscal conservatives in Wisconsin and elsewhere. It’s that philosophy that governing Republicans need to remember as they work through the abundantly more challenging phases of budget-writing ahead.

Their friends in the 21st century Whig Party seem to be helping drive that message home.

After hours of “free college” and massively expanded welfare benefits talk by Joint Finance Committee Democrats last week, conservatives seemed to remember what they are ultimately fighting against.

Walker on Weber’s show reiterated that there are many more commonalities than differences among Republicans.

“We are together pushing back on the absurdity of Democrats. The same party that was in charge when tuition went up 118 percent at UW campuses the decade before our (tuition) freeze is now claiming they want to provide for free tuition.”