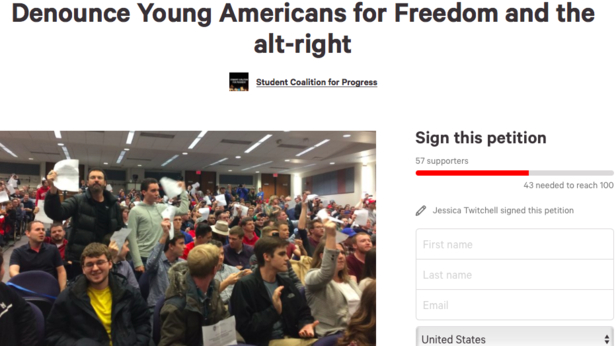 The Change.org petition calls on the UW-Madison administration to “denounce” Young Americans for Freedom as a hate group, revoke its charter, and force students to go through mandatory diversity training

[Madison, Wis…] Progressive campus activists on the University of Wisconsin-Madison campus have started a change.org petition asking the school’s administration to “take a hard look at” the conservative Young Americans for Freedom (YAF) group. The petition calls for YAF to be labeled as a hate group, for members of the conservative group to attend forced diversity training, and for the administration to revoke its charter.

While college is typically meant to be a time for young students to expose themselves to new and differing opinions, it seems that the liberals on the UW-Madison campus have had enough and are working to silence conservative free speech.

Members of Y.A.F. have further contributed to making campus a hostile environment by attempting to out and misgender LGBTQIA+ students as well as have individually confronted and made feel unsafe prominent members of student government.
We, the undersigned are asking that UW-Madison administration take a hard look at the charter of Young Americans for Freedom, an organization where some of their chapters have been classified as hate groups by the SPLC, and ideally put the involved students through intensive diversity training and have the charter revoked so Y.A.F. is no longer a campus organization that can create a hostile environment on campus.

The petition was launched in part as a protest of the YAF chapter bringing conservative speaker Ben Shapiro to campus several weeks ago.

In an email with the MacIver Institute, Shapiro said, “This is pure thought policing — and it’s a disgusting slur against YAF and me personally. Linking me with the alt-right is absolutely ignorant (statistically speaking, I was their #1 journalistic target last year), and the content of my speech was entirely a rebuke of racial tribalism on all sides. But truth doesn’t matter to leftists, who pre-emptively declare their feelings hurt so they can play victim and then hurt others.”

Tyler Brandt, Vice President of the Young Americans for Liberty UW-Madison chapter, spoke to MacIver about the left’s new attack on free speech.

“Never before have I seen such a clear example of targeted defamation to advance a political agenda,” Brandt said. “The baseless claims in combination with hypersensitive rhetoric is a way for the campus left to isolate themselves from any sort of dissenting opinion. They want to have the majority voice on campus and are using any tactic viable to silence conservatives.”

Brandt, a junior at UW-Madison, said that protesters have not even sought consistency or accuracy in their claims. When Shapiro held an event on campus, protesters told Shapiro he should be wearing a swastika. Brandt points out that Shapiro is Jewish and, in fact, was named by the Anti-Defamation League to be one of the most discriminated against journalists in the 2016 Presidential Campaign.

“At the end of the day this is just sad,” Brandt said. “Not only does it unfairly target conservatives for voicing their opinion on a liberal campus, it represents the lack of tolerance for political discourse. When we have a generation of kids being taught that it is acceptable to mislabel, defame, and shut down dissenting groups we are in for a rough political future.”

Readers may remember the MacIver Institute’s coverage of the Ben Shapiro speech on campus, notably how prominent radio host Vicki McKenna was harassed and dubbed a white supremacist by campus protestors.

At press time, the petition had 66 supporters.

When asked for comment on the petition, a communications representative in the UW-Madison Chancellor’s office wrote that “Young Americans for Freedom is in good standing as a student organization.”