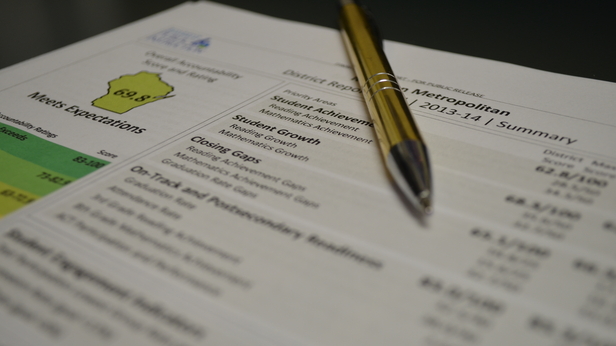 MPS Officials say one thing, the data says another.

After a busy fall of education news, Wisconsin’s public school report cards are out. The verdict, as usual, depends on who you ask. Such releases tend to be a remarkable display of doublespeak.

The major takeaway – that Milwaukee Public Schools (MPS) fell off the list of failing school districts – wasn’t even news. Nearly everyone from the State Superintendent to MPS officials not-so-discreetly hinted at the change before it happened, which the MacIver Institute previously covered. In their respective press releases, MPS and the Department of Public Instruction (DPI) both celebrate the news.

The MPS release writes that:

In a similar manner, DPI’s release celebrates the fact that most schools and districts met expectations on the new report cards. We did it! That is, if you believe the talking heads or the mainstream media headlines.

The releases don’t mention last month’s news that nearly six out of ten Wisconsin students are performing below grade level. Though if you’re waiting for two of the most entrenched political forces in Wisconsin education – DPI and MPS – to serve up self-criticism, don’t hold your breath.

While MPS dropped off the failing list to great fanfare and publicity, pushing past the headlines you find a much different picture. Despite no longer being categorized as a failing district, there are still 25,000 students who attend schools within the district that are failing. I wonder if the 25,000 kids trapped in bad schools celebrated the wonderful “we are no longer failing” news with Dr. Driver? Just 19.5 percent of MPS students are proficient in English and 14.9 percent in math. Only 7.5 percent of black students at MPS are proficient in math. How in the world can the district rise from the failing list when only one in five students is proficient in English or math? Do MPS parents, or any parent for that matter, think this makes sense? When students graduate MPS high schools and go onto the University of Wisconsin System, many must take remedial coursework for zero credits and full tuition.

It seems that in 2016, the gap between the official word and the reality on the ground is getting further and further apart.

Of course, it’s not just a Milwaukee problem. While just five districts out of 424 – Racine, Cassville, Cambria-Friesland, and Menominee Indian – are marked as failing, 52,201 students attend schools that are failing. And that’s just the tip of the iceberg.

Green Bay Area Public School District, the fourth largest in the state by student enrollment, scored 61 out of 100 points and was dubbed as meeting few expectations. That “few” was likely more of a “phew” for school officials when they realized they wouldn’t have to deal with the official failing label. And yet, the English proficiency rate at Green Bay is 32 percent. The math proficiency rate is 29 percent. It’s a stunning display of disconnect.

The University of Wisconsin Report on Remedial Education serves as a strong recent datapoint that can inform the public on how well schools are actually performing. The report lists high schools which sent more than six graduates into the UW System who needed remedial education – that is, required math and English catchup courses, taken at full tuition and for zero credits.

And so, who is the public to trust? I once heard someone say that the plural of anecdotes is not data. Wisconsinites would be wise to heed that advice. Excel spreadsheets are less interesting than compelling quotes from public officials, but when everyone’s saying different things, the only thing you can really trust is the data itself.