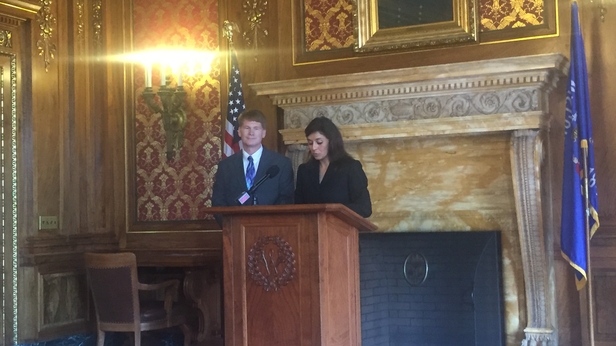 “It is our hope that the recommendations will be considered during the next legislative session or addressed in the biennial budget,” Rep. Rodriguez said. “We have shared a commitment to improving student outcomes in our schools, and we all want every student to succeed. Today’s students are the future leaders of Wisconsin, the next generation of our workforce, and the bright minds of tomorrow.

The group toured six school districts and held public hearings in Madison, Kenosha, Green Bay, Milwaukee, and Eau Claire. The goal of the tours and public hearings was not only to hear from the public but to also seek best practices in the hope to replicate them in other urban areas.

The task force’s recommendations are as follows:

Rep. Rodriguez was joined by Rep. Jeremy Thiesfeldt (R-Fond du Lac), Chairman of the Assembly Committee on Education, who also served on the Speaker’s Task Force. In his remarks, Thiesfeldt touched on the individualization of education, which he sees as the future of education.

“For many years we’ve had this kind of factory model of education and that is slowly but surely changing,” Thiesfeldt said. “That’s a difficult transition in some cases, because you have to have educators who buy into that and are willing to take the training that’s involved. And you also have to have parents that believe this is the right way to go because it’s not the same school they went to, it’s not the same style of teaching and learning as they experienced when they went to school.”

For many years we have had a factory model of education, in many ways that’s changing – @Thiesfeldt on the future of #education #wipolitics

“This task force is helping with that public awareness to bring people to the realization that education as a whole is changing,” Thiesfeldt said. “But the parts of our education system where there still seem to be the most struggles are our urban areas, and we need to pay some special attention there.”