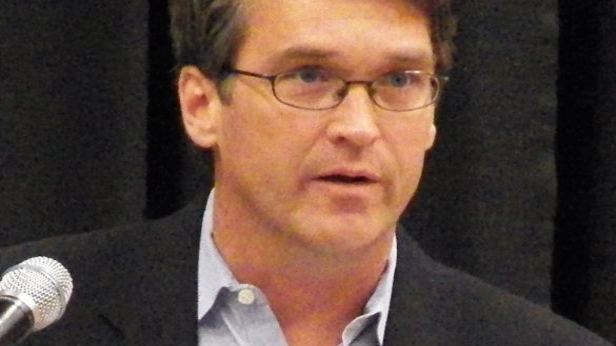 The following profile of MacIver Institute President Brett Healy by Patricia Simms appeared in the Wisconsin State Journal in its June 19 issue.

Brett Healy, president of the conservative MacIver Institute for Public Policy, has had his share of media attention over the last two decades.

He worked as chief of staff for State Assembly Speaker Scott Jensen for 12 years and testified in the trial at which Jensen was convicted of three public misconduct in office misdemeanors and a misdemeanor ethics violation. (The misconduct convictions were later overturned.)

His think tank has campaigned at the state level against increasing the minimum wage, against the law that bans retailers from selling merchandise below cost, against Obamacare, and for changing the state’s pension system.

But when Healy was 16, he wanted a different kind of spotlight. “I wanted to be Michael Jordan when I was 16,” Healy says. “I even picked the jersey No. 23 for junior varsity basketball my sophomore year.”

But, says Healy, it quickly became apparent he was not Michael Jordan. “I eventually turned to public policy and politics. I should have stuck with basketball. I’m sure my coach would tell you otherwise.”

Now 47, his athletic interests have shifted to soccer, mostly the television-watching kind. But Healy and the MacIver Institute remain in the thick of the political game.

A. I run a free-market think tank. Talking about the need for our government to be fiscally responsible, living within our means and leaving the world a better place for our children and grandchildren is not mysterious. I will grant you that it can be boring at times, but not mysterious.

MacIver reports on what is happening at the Capitol, produces real-time research and analysis on the pressing issues of the day and works to make our government more transparent. We at the MacIver Institute are passionate about our mission and our work. We believe it is wrong to prosecute profits and to penalize the successful. We at MacIver work every waking moment of every day to make government more efficient, more transparent and more accountable to the hard-working taxpayers of this state.

Q. How do you do that? Opponents are suspicious of your agenda. How can a neutral citizen trust the information that you disseminate?

A. Anyone involved in the public policy debate — conservative, liberal, progressive or whatever they may label themselves — knows that your research and analysis must be airtight if you are going to survive in today’s world. Wisconsinites have such an independent and no-nonsense streak about them, you cannot cut corners or you risk losing all credibility. People are so skeptical of overblown rhetoric and what they see in the media in general, MacIver must earn their trust, each and every time we publish a new investigation, a story or a piece of research.

Q. Does the institute have a role in presidential politics in 2016? Conservatives seem very torn in support of Donald Trump.

A. I cannot tell you how many conversations I have had with nonpolitical friends and neighbors who say, “I cannot believe, in a country as great as ours, these are our only choices.” In the social circles that I run in, I think once everyone is over the initial shock, the desire to keep the Clintons out of the White House will trump, so to speak, the wild card that is Trump. I think it will be close either way.

I’m so glad I’m not involved in the campaign so I can just sit back and watch this one from the sidelines. It is going to be the most fascinating and significant presidential election in my lifetime. We will be dealing with the ramifications of this election for decades to come.

Q. What about you? Have you always favored conservative politics? Or were you raised as a liberal, then defected?

A. I was raised in a fiscally conservative, nonpartisan household. My first political job while I attended Marquette University was working as an intern for congressman Jerry Kleckza, Democrat from the south side of Milwaukee. I wouldn’t call it a defection, but it became clear early on that I believed in equal opportunity for all. I have never worshipped at the altar of big government. I believe in the power and the potential of the individual. I believe that the opportunities this country affords all of our citizens is astounding.

Q. Were you born and raised in Wisconsin?

A. Born in Seattle, raised in Waukesha. My parents both worked their tails off to give me and my siblings a good upbringing and the opportunity to follow our passion, whatever that passion was. My parents taught me to be humble, the importance of hard work, and to respect the rights of others. Thanks, Mom and Dad.

Q. Do you ever tire of political arguments?

A. I tired of politics a long time ago, but I love public policy debates. I go to work every day hoping to make Wisconsin a better place for my children and that is why I love my job. Absolutely love it.

A. My wife and I are the proud parents of four teenagers. We do not have any free time. If we have a free hour, we usually talk about what is the next hurdle to clear. We have two black labs that only add to the chaos. My wife would tell you that I spend a lot of time watching the English Premier League and soccer in general. I can neither confirm nor deny that charge.

Q. Do you have friends who consider themselves liberals?

A. Sure, but they are liberal only because I need a little more time with them to show them the error of their ways. Just kidding. I do not seek out politics when I’m watching one of my children’s soccer games or at the school band performance.

I’m sure many of the parents I “hang out” with at these events have no idea what I do or that I am a fiscal conservative.

Read the original piece at the Wisconsin State Journal.