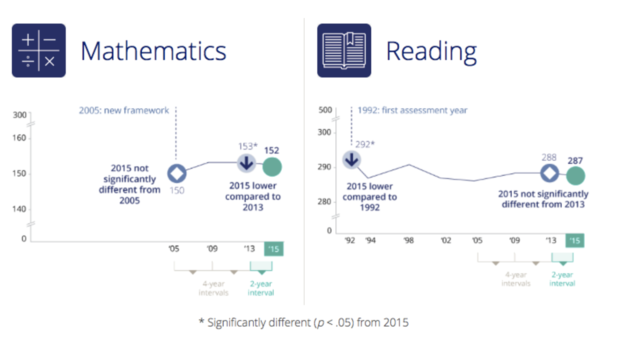 About twice as many students at Catholic schools scored proficient in math and reading compared to their public school peers,

Lower-achieving students fared worse than in 2013, according to the results

[Washington, D.C…] High school seniors across the country are scoring worse at math and not improving at reading, according to new results from the National Assessment of Educational Progress, also known as the “Nation’s Report Card.”

Though no other information was released on whether schools participated in choice or voucher programs, the information seems to echo March 2016 test results that showed Wisconsin students in choice programs outperformed their peers in public schools in almost every category.

Nationally, no significant score change existed for any racial or ethnic group in either subject, though a troubling achievement gap existed across racial and ethnic boundaries. While 32 percent of white students were proficient in math in 2015, only 7 percent of black students achieved the same level of proficiency.

The percentage of 12th graders at or above a proficient level of reading is down from 40 percent in 1992, the first year the test was administered, to 37 percent in 2015. The test results also revealed score declines in reading for public school students as well as schools in the southern region of the country.

The new dataset draws from the test results of 31,900 high school seniors who took the exam in 2015.

Wisconsin’s Department of Public Instruction did not immediately comment on the results, though Superintendent Tony Evers released a statement on Wisconsin’s graduation rate, which is higher than the national average, a day after the NAEP’s data release.