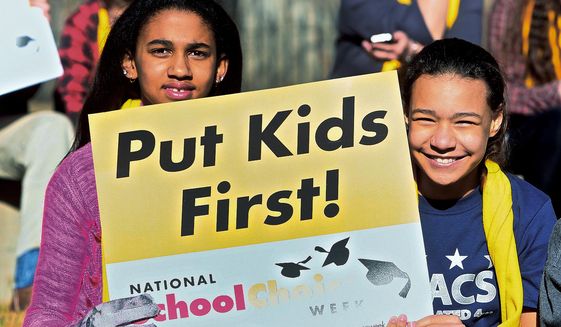 As we celebrate National School Choice week, Wisconsinites should be celebrating. It’s been over 25 years since former Governor Tommy Thompson signed the law that allowed the first school choice program with private schools participating. Increasingly, parents are able to make informed choices about which schools their children will be able to attend. Not surprisingly, parents are embracing choice and the demand is growing for more.

As a parent of one child in a Catholic school and another child in an online charter school, I am grateful that Wisconsin legislators are finally starting to see that parents are the best judges of the educational needs of Wisconsin’s children

Today the program has grown to 27,619 participating students with 117 participating schools. Districtwide, 68 percent of families with children are income-eligible. The enrollment cap has been eliminated and the income threshold has been raised to 300 percent of the federal poverty level. More importantly, the program expanded to Racine and is now expanding statewide, if somewhat tepidly.

Parents are being trusted more than ever before to make the right choices for their children. There are charter schools, independent charter schools, online charter schools, open enrollment, and a school choice program for special needs students. There is even a tax deduction for families sending children to private schools regardless of the family income.

As a parent of one child in a Catholic school and another child in an online charter school, I am grateful that Wisconsin legislators are finally starting to see that parents are the best judges of the educational needs of Wisconsin’s children. We’re certainly doing better than our neighbors to the south.

Last year I attended a school choice conference in Chicago. They were astounded to hear that my son attends all of his classes online. In Illinois, there is a moratorium blocking the creation of online charter schools. Even if the moratorium is lifted, supporters of online charter schools would have to go from district to district seeking the approval of individual school boards to allow the children in their districts to attend the new school. As you can imagine, it’s nearly an impossible task, and the one serious attempt to start an online charter school fell short.

If starting an online charter school is impossible, given the hostility of the Illinois legislature, imagine the odds against ever giving vouchers to parents so their children can escape the failing public schools and attend private schools, religious or not. Still, there is some competition we found out as Chicago public school children desperately try to get into charter schools to escape the corrupt and dysfunctional public school system. The pressure is on private schools to compete.

Why is there such a demand for alternatives? Because parents in Illinois, like parents everywhere, want to choose what is best for their children. They don’t want the quality of the school their child attends to be determined by an artificial political line any more than they want the quality of the school determined by the child’s skin color. Parents want what Wisconsinites have: choices for their child’s education.

Unfortunately we still have a long way to go to universal school choice here in Wisconsin. The plan to expand school choice is limited to Wisconsin families who qualify for free and reduced-price lunch and with incomes up to 185 percent of the federal poverty level. It is also currently capped at one percent of a district’s enrollment, although that cap goes up every year until 2026 when the cap is removed.

That is still not accepting the principle that parents, regardless of income or geography, are best at determining what type of school is best for their child. Nor is it following the idea that tax money that is collected for educating children is actually being spent to educate children. Instead, we are still maintaining artificial barriers to children attending the school that is the best fit for them to maintain the educational status quo in districts across the state. We are still collecting tax dollars to fund school districts, not to fund educations.

Governor Tommy Thompson, when he introduced school choice in his state of the state address on January 25, 1989, said, “We must do better, we cannot be content with the status quo, nor can we be complacent when we know that not all our children are receiving the best possible education.”

Thompson concluded his remarks on school choice, “All of our children deserve equal opportunity in their education, and we must work together to implement a Wisconsin choice program. Clearly, it cannot be done without the help of this legislature.”

While we have much to be thankful for, not all of our children have equal opportunity in their education. We are not yet at the time when we can be complacent. The legislature still has much to do.