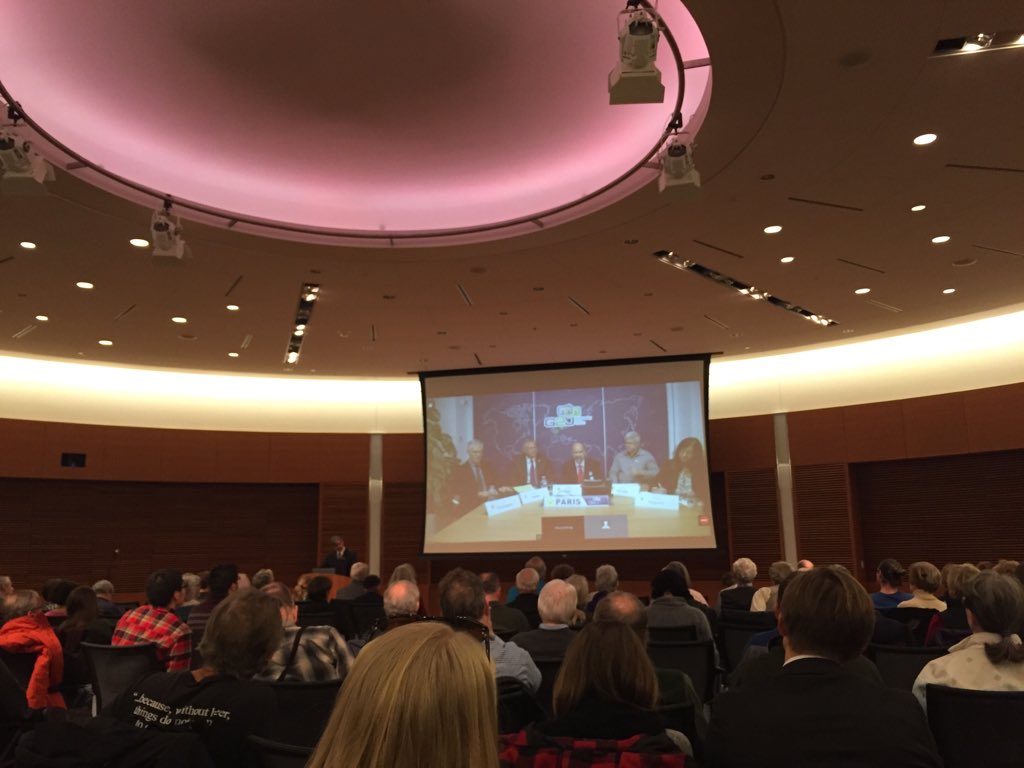 Representatives to U.N. Climate Change summit disagree over conference’s focus, whether outcome should be binding

[Madison, Wisc…] Five Wisconsin delegates to the 2015 Paris Climate Conference, also known as COP-21, spoke with attendees at a “Live from Paris” teleconference on the UW-Madison campus last week.

The panel included representatives from the private sector, healthcare, law, and academia:

All emphasized the need for climate change action, but panelists politely disagreed on several issues, including the need to conclude the talks with a legally binding agreement and what the ultimate focus of the conference should be: technology and innovation or health.

Nesler and Thompson stressed the importance of private companies’ innovation and technology as keys to increasing efficiency and reducing carbon emissions. But one panelist, Patz, disagreed, suggesting emphasizing market-driven innovation was drowning out a focus on health.

Patz wants to use the climate agenda to change peoples’ lifestyle choices, claiming driving cars rather than walking contributes to an unhealthy sedentary lifestyle:

“I think there may be too much focus on technology, because there’s so many simple things as far as conservation and changing of the lifestyles in a positive way…When they’re talking about electric cars in the cities – that’s great, but it sure would be a lot healthier to walk and use efficient public transportation, a bicycle or something like that. I think that’s where that could be a little too much of an over-dependence on technology.”

Patz noted that “Oslo is going to be banning all cars driving in the city in the next 4-5 years…You won’t be able to drive in many parts of the city and they’re really ratcheting up alternative transportation.”

Patz’s total salary in 2013 was more than $186,000 excluding benefits, according to a Milwaukee Journal-Sentinel database.

Panelists said that the focus of the Paris conference has been on wind and solar power as the most attractive alternatives to fossil fuels. One panelist reported seeing teenagers walking around with signs calling for “no coal, no oil, no natural gas, no nukes.”

There was little indication that conference members were including reliable, relatively clean fossil fuels in the week’s conversations. In fact, one panelist said that not a single fossil fuel interest had representation at the conference.

Panelist: has not seen a presence of any fossil fuel- using companies. Shouldn't they take part in these discussions? #COP21

When offered the opportunity to submit questions, the MacIver Institute asked about the role of nuclear energy throughout the conference. Many audience members laughed, and a panelist said there’s “a very strong focus, obviously, on solar and wind” while suggesting at least a nominal “all of the above” approach.

This is despite the fact that France, the host country of the COP-21 talks, derives about 75 percent of its energy from nuclear power, according to the World Nuclear Association. It is the most reliant on nuclear energy of any other country in the world and is the largest electricity exporter in the world, touting cheap energy costs for its citizens.

We asked a question re: nuclear energy's role. Panelist:strong focus on wind&solar but also an all of the above approach incl. nuclear

But Nesler was concerned that legally binding agreements would actually scare some countries away.

“The counterargument to legally binding is that we want every country to be as ambitious as possible and if it’s viewed that there are penalties or other legal obligations, people will probably hold back,” Nesler said.

Lawyer on panel hopes for a "legally binding document" for all states participating in Paris. What about Congress & future Presidents?#COP21

Atapattu also called for an international legal framework to deal with climate change refugees as indigenous populations are forced to flee rising sea levels and areas rendered uninhabitable by climate change. She also voiced hopes that the resulting document would include language directly referring to “the link between climate, gender, and human rights.”

But if anything legally binding emerges from the COP-21 talks, President Obama will have a difficult time committing the United States. His administration’s Clean Power Plan (CPP) has found little support back home.

In 2010, Obama’s Cap and Trade plan failed to garner enough votes for passage, even though his own party held large majorities in both the Senate and House.

The Environmental Protection Agency (EPA) is now attempting to bypass the legislative process by implementing the CPP through the federal rule-making process. Twenty-six states including Wisconsin have joined in multiple lawsuits contesting the new rules.

Wisconsin would be hit especially hard by the CPP.

The plan will also increase electricity rates in Wisconsin by up to 29 percent, according to modeling studies by Wisconsin’s Public Service Commission.

Panelist: countries committed $100billion for implementation. $64b accounted for at this time. Calls it a "sticky issue" #WheresTheFunding

The MacIver Institute also asked panelists whether the CPP was part of the Paris discussions. While panelists said the CPP wasn’t a topic, one called it a “bargaining chip” that Congressional Republicans are trying to take away.

The House voted overwhelmingly – 242-180 – this week to block the CPP. The U.S. Senate approved identical bipartisan legislation two weeks ago.

Though the legislation faces a certain presidential veto, it illustrates the dilemma facing delegates to the COP-21 talks amid economic and political realities confronting many world leaders back home.