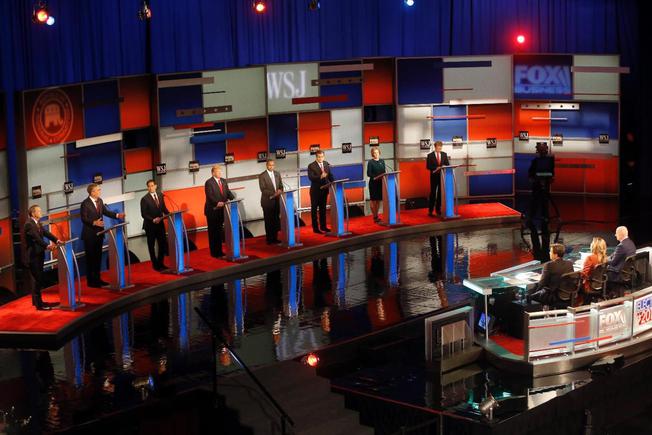 by Paris Procopis
Special Guest Perspective for the MacIver Institute

The Republican Presidential Debate in Milwaukee seemed to set the stage for a reshuffling of the deck. For some it was do or die. For others, just hold on to fight another day.

This was the first time I have ever attended a presidential debate in person, and I must say, it is much different than watching on TV. One couldn’t help but notice the energy in the building from all the people. It was easy to get lost in the buzz. Throughout the night it was plain to see that the audience was there not just for one candidate but for the conservative cause.

There was reaction to all the candidates, including some very vocal boos at one point. The biggest reactions seemed to come over immigration and military spending. Overall, there seemed to be confidence that one of these people will indeed become our next President.

In the early debate, the biggest impact came from Chris Christie and to some extent Mike Huckabee. Both proved that they did not belong in the lower tier debate. Christie did an excellent job of keeping the attention on Hillary Clinton, in spite of attacks on his record from Bobby Jindal. Christie had many good one-liners but the most memorable one was when he said that “Hillary is coming for your wallet, don’t worry about Huckabee or Jindal, worry about her.”

There was one CNBC flashback moment when the candidates were asked which Democrat they respected the most. None of the candidates took the bait and chose instead to talk about other things. Huckabee took the moment to talk about the VA, stating that we should make the President and Congress have to go to the VA for healthcare and then we would see major improvements. Overall, the early debate was very spirited and interesting. Unfortunately for Jindal and Santorum, they did nothing but move further into political obscurity.

Then came the main debate. Of course, being prime time, there was a lot of fanfare which created even more energy from the audience. Unlike the early debate, this one took a long time to really get going. Once it did, there were some great exchanges.

As the front runner, Donald Trump did very little to advance himself even though economics was supposed to be his wheelhouse. As a debater he is much different than as a campaigner. At times, it seemed like the audience was tiring of his ‘insert adjective here’ style of answering questions. Every time he spoke there was some sort of awkward laughter from the audience. His biggest moment was when he referred to building the wall and said just look at Israel. He also said at one point that he was all for Putin going after ISIS, leading Jeb Bush to question his knowledge of the situation. He did take a moment toward the end to compliment everyone’s various tax plans, saying that even though there were differences, each one is better than what we have now.

He did snap at Carly Fiorina, asking: “Why does she keep interrupting everybody?” causing the audience to boo him. Bad move. One exchange between Trump and John Kasich propelled Trump to say, “I have built an unbelievable company worth billions and billions of dollars, I don’t need to hear form this man.” Trump has almost completely backed off of his criticism of both Bush and Rubio. Once again, this was supposed to be Trump’s arena but his lack of specifics is giving many people pause.

Ted Cruz didn’t gain much ground but he held strong and should surge a bit. He remained the steady conservative firebrand. When discussing the immigration debate, he did have one shining moment when he said: “I will say the politics of it will be very, very different if a bunch of lawyers or bankers were crossing the Rio Grande. Or if a bunch of people with journalism degrees were coming over and driving down the wages in the press. Then, we would see stories about the economic calamity that is befalling our nation.” Cruz also gets credit for biggest save of the night when he saved himself from an almost Perry moment while rattling off a list of departments he’d close.

John Kasich was the constant interrupter. Every two minutes asking: “Can we comment on that?” He almost had a look on his face of what in the heck am I doing on this stage with these idiots. He definitely was the hardest hitting against Trump, but that strategy is not boding well in the polls. He may have dealt his campaign a final deathblow with one line. In an exchange with Ted Cruz on the bank bailouts, he said, “As an executive, I would figure out how to separate those people who can afford it versus those people, or the hard-working folks…” The audience let out the biggest boo of the night, thus the beginning of the end for Kasich’s presidential campaign.

Rand Paul has finally found his voice. The staunch libertarian actually showed up to a debate. He gave an impassioned defense of his foreign policy leanings and challenged the Republican hawks. He also attacked Marco Rubio’s plan to offer more childcare as not conservative. In Paul’s case, his views are not likely to win him the nomination, so, maybe a small bump, but nothing major.

Ben Carson stuck to his mild-mannered approach. After all, that is what has worked so far. But, with the electorate becoming more involved, he needs to start giving specifics and show some life. Once again, he was mainly AWOL during the debate. He went after the media for lying about him but his shining moment was his closing statement. He said through the course of the debate that people died from drugs, the national debt rose and babies were aborted, saying, “This is a narrative that we can change, not we the Democrats, not we the Republicans, but we the people of America, because there is something special about this nation, and we must embrace it and be proud of it and never give it away for the sake of political correctness.” Perhaps this is why he’s a front runner, but I say he falls to number four.

Jeb Bush had the most to win or lose. He did put on perhaps his best debate performance to date. The problem is, he is barely resonating with Republican voters. With the exception of one or two bug applause moments, he mostly fell flat on the crowd. Helping him the most is that he did not take on any losing fights with Marco Rubio. His best moment came from confronting Trump on immigration, saying, “to send them back – 500 thousand a month – is just not possible and it’s not embracing American values.” This drew a strong applause from the crowd. The crowd seemed to respond well to addressing the practicality of sending 12 million illegal immigrants home. With Rubio surging, Bush will continue to flounder in the polls, prolonging the inevitable.

As for Fiorina, I say welcome back! The articulate, in-command debater from the first two debates was back with a vengeance. She focused on her outsider, businesswoman strengths. She showed how well she knew what was going on in the world. In fact, she was the most specific when describing how she would handle Russia and their aggression. She rattled off middle eastern nations like she was reading them from a textbook. She had a fun moment when she actually met with Putin in a private meeting instead of in the green room of a show. The line clearly ticked Trump off a little. It is curious though, with her stellar debate performances, she has yet to capitalize on moving up in the polls. I think she needs to rethink how she will get the word out today. All signs are that she will move the needle in her favor. Perhaps to the number three spot.

The biggest winner was perhaps Marco Rubio. Not because he was the best, but he did nothing to stop his momentum. Marco Rubio was perhaps the most effective in maintaining his positive message. He managed to interweave his personal back story in every opportunity. Most notably he went after Rand Paul for being a “committed isolationist” when Paul asked if spending trillions on the military was conservative. Rubio said, “I know the world is a safer and better place when America is the strongest military power in the world,” causing the audience to come alive with a thunderous applause. Oddly enough though, there were no questions about the party credit card. This solidifies Rubio as the perceived upcoming frontrunner and pending anointed one by the party. I do have one concern about him. After having seen his stump speech on Monday, I could tell he was constantly focused on those stump speech talking points throughout the debate. Almost like a mental teleprompter. That being said, his upbeat, Reaganesque rhetoric seemed to be resonating with the audience in a big way. Especially when he talked about reforming education. I just wonder if he can deliver come next fall. Talking points can only take one so far. But clearly he looks to move into the number two spot for a while, maybe even number one.

Overall both debates will weed the field further. Two, perhaps three, candidates will drop out. I did notice that there is less focus on Trump causing others to move up in the polls and causing Trump to start a small slide. I ran into a friend of mine who was a solid Trump supporter, and is now rethinking. It will be telling where things are in the next week. We may even see Trump drop to second after Rubio. One thing is for sure, the people attending the debate are energized.

The question is will that energy level remain high through next November?