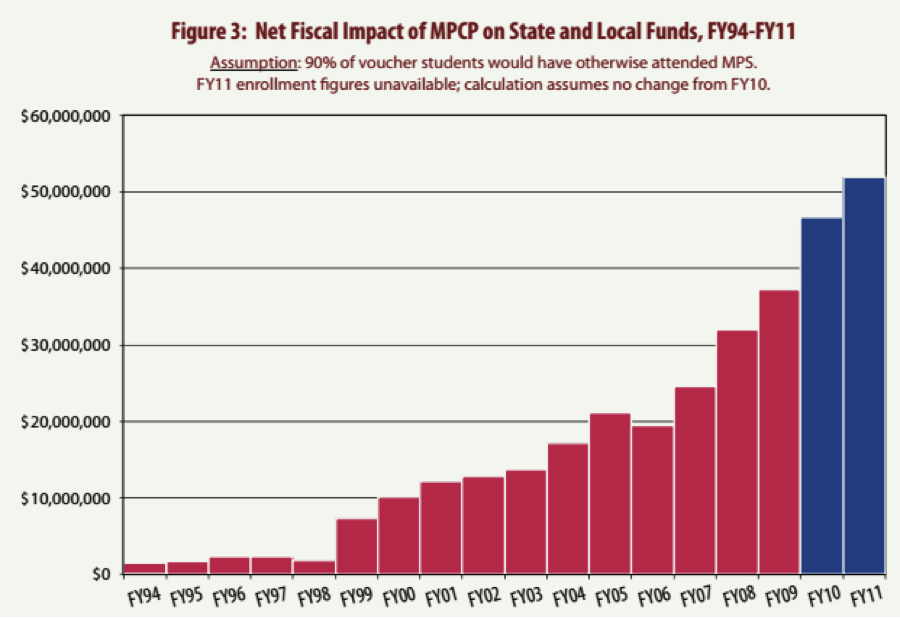 In a statement rooted in opposition of vouchers and school choice, Democratic gubernatorial candidate Mary Burke said “We have to get out of the ideological warfare on this, and let’s just talk dollars and cents.” Here’s a good place to start: the Milwaukee Parental Choice Program (MPCP) has saved the state more than $300 million dollars since its inception.

That figure comes from a state-appropriated examination of the MPCP called the School Choice Demonstration Project. Over a five-year long study, researchers from the Universities of Arkansas and Wisconsin took an in-depth look at the student outcomes and fiscal effects of the program. What they found that was since pupils attended private schools through a state-funded voucher that was significantly less ($6,442 in 2010) than the average per-pupil revenue at the city’s public schools ($14,863 in 2010), the state saw significant savings due to this lower cost.

How significant? Researchers estimated that the program had a net fiscal benefit of $135.8 million from 2009-2011 alone. Over the life of the MPCP, they tallied the total savings at more than $300 million.

That research ended in 2012, but it’s safe to say that these major savings are still being felt throughout the state. The key here however, is that the MPCP research deals primarily with students who would have attended public schools without the offer of a voucher program. That’s something that we haven’t seen in the state’s modest, 1,000-student voucher program – but it was a major part of the 2011 expansion that brought vouchers to Racine.

Legislation bars students that currently attend private schools from using a voucher in Racine’s Parental Private School Choice Program (PPSCP). If Burke is truly concerned about the dollars and cents behind a choice program, then this would be a significant source of savings that would also deliver an unprecedented level of freedom for parents who are looking for the right school to fit their child’s needs.

Let’s look at the other flaw in Burke’s argument – that public schools are entitled to a flat amount of funding regardless of the number of students that they educate. It’s true that Wisconsin’s public schools lose money each time a pupil leaves their classrooms – 1/3rd of the total in the first year, 2/3rd in the second, and the full amount afterwards. Districts have less money when they have fewer total students – but they also have fewer expenses related to educating those children. Suggesting that they lose money only makes sense if you believe that local districts are entitled to funds regardless of how many students actually choose to attend the schools in that area.

School choice savings aren’t the only thing that Burke could stand to learn in Milwaukee. The state’s most embattled district has a smaller achievement gap than Madison, the district in which the gubernatorial candidate is a school board member. In fact, the Madison Metropolitan School District was the worst large district (>7,000 pupils) in Wisconsin for black students in terms of graduation rate.

There are several avenues of opposition to school choice, and Burke should be commended for taking a new route that hasn’t been incessantly retreaded by opponents over the past two decades. However, there’s a reason why few people are arguing against vouchers as a funding drain – it’s because it isn’t true. If Ms. Burke is so concerned about funding and costs, then she should favor a voucher program that brings new opportunities for children who aren’t succeeding in their local public schools. It wouldn’t just be a boon for their families – Wisconsin’s experience in Milwaukee shows that it would lead to major savings as well.