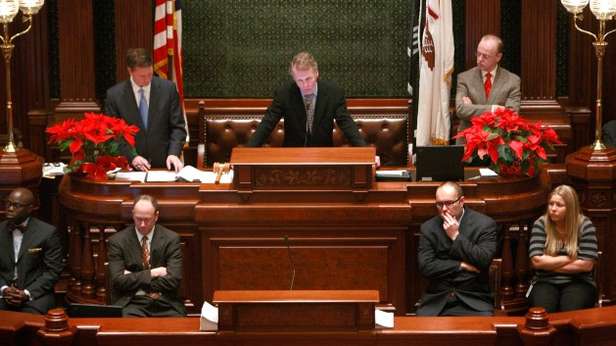 The Illinois state legislature rammed through a “middle-of-the road” budget last week totaling $35.7 billion for fiscal year 2015. The budget has been labeled “incomplete,” a bill that “reverses” supposed progress in Illinois’ budget situation. Democrats, who control both houses and the governor’s office, are also calling the spending measure “flat” because it strikes a middle ground of avoiding cuts and foregoing spending increases.

Leading Democrats were unable to gain enough support for any of their proposed tax increase extenders, meaning revenue from temporary tax increases passed in 2010 will start declining next year.

The Chicago Tribune told readers that the new budget is actually an increase of around $300 million from last year. Another estimate from Illinois Policy Institute journalist Scott Reeder indicates it is a $850 million increase.

The budget compromise uses a series of one-time gimmicks and accounting tricks to make up for revenue decreases. According to the Tribune, $650 million will be raided from hundreds of special funds dedicated to other purposes. The Doyle Administration here in Wisconsin received heavy criticism for its special fund raiding, but in Illinois it has become common practice.

Another $650 million that was supposed to go towards paying off billions in backlogged bills will be used to cover gaps in cash flow. One of the most questionable moves, however, is pulling $380 million from future state employee health insurance liabilities, a trick that is not likely to be popular among state employees.

Next year’s budget process will be seriously injured by this year’s budget. Long-time Illinois political commentator Rich Miller says that the fund borrowing, cash flow gimmicks, and reduced revenues will put a $5.7 billion dollar hole in next year’s budget.

Governor Pat Quinn’s budget office has estimated that there will be a $2 billion hole for next year’s budget in revenue decreases alone. That number will most likely double as the temporary tax hikes are set to incrementally phase out over the next few years.

A Reuters report noted that the compromise budget’s reliance on one-time accounting gimmicks could harm the state’s bond ratings. Recent downgrades have already pushed Illinois to the brink of triple-B ratings.

“To the extent the state relies more on deferring payments in the coming year – that would be a negative factor,” said Moody’s Investor Service analyst Ted Hampton.

The MacIver Institute has reported on Illinois’ dire financial situation. The state holds $100 billion in unfunded pension liabilities, $7 billion of general fund deficit, and an overall net position of $45 billion in the red.

It seems as if this year’s budget will only add to the troubles, with the possibility of general fund shortages approaching $10 billion if spending stays constant. Perhaps Reeder’s newest commentary title says it best: “If this budget is balanced, Illinois lawmakers are cheating.”

For more facts on Illinois’ absurd budget, check out these facts.