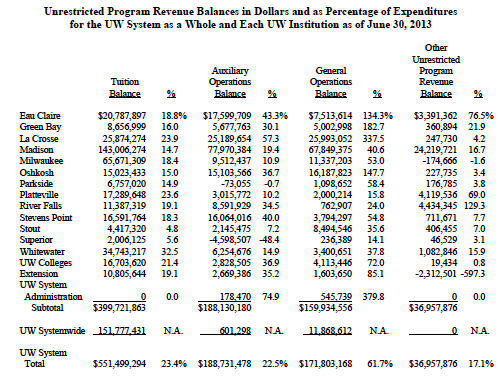 The University of Wisconsin System and the billion dollar surplus controversy was, once again, the center of the debate at the Joint Committee on Finance. Back in 2013, Legislators and the Governor demanded answers from the UW System when the legislature’s CPA Caucus discovered a hidden, $1 billion cash surplus. The political reaction to this discovery was so negative and severe that Gov. Scott Walker immediately called for a two-year tuition freeze on all UW campuses, which was included in the 2013-2015 state budget.

In an attempt to prevent large, taxpayer-financed surpluses from happening again in the future, budget lawmakers decided yesterday that if a UW institution finishes the year with a fund balance at or above 12% of the year’s expenditures, that school is required to report in detail how they spent every dollar as well as what they plan to spend in upcoming years. Conversely, if schools experience negative end-of-the-year balances, they must submit a savings plan and time frame that lays out how long it will take to get spending back in the black. Schools with a negative balance are prohibited from using their financial situation as an excuse to ask taxpayers for more money.

In both cases, the maximum and minimum reporting “triggers” require schools to submit their reports to the Board of Regents who must approve them and pass them along to the Joint Finance Committee and Joint Audit Committee.

Majority Republicans touted the motion as an important step for transparency and accountability in the UW system. They explained that taxpayer families and students should be confident that state appropriations and tuition fees are being spent responsibly while keeping costs down.

However, JFC member Cory Mason (D-Racine) voiced concerns over the direction Wisconsin is headed when it comes to funding higher education. Mason praised UW-Parkside and UW-Milwaukee as institutions that have a record of low fund balances because they use resources to make tuition affordable for low-income and first-generation college students.

Mason also expressed his disapproval of what he saw as a government “take back” of the tuition surplus found a year ago.

“I was disappointed that the state took back what was, by and large, a tuition surplus that students had paid for and took it back and basically dinged the UW for an equal amount.”

After expressing support for the transparency motion as a whole, Mason warned against using the measure as a spending cap on future UW system investment.

“I don’t want it to be used as an excuse not to adequately fund higher education”, said Mason. “I think for too long, under both parties’ leadership, we have underfunded the UW system and put tuition burdens on families at a pace that is frankly unsustainable.”

Assemblyman Dale Kooyenga (R-Brookfield), who was instrumental in uncovering the UW surplus, objected to Mason’s skewed view of the billion dollar surplus controversy.

“The reality is, this was not a tuition surplus”, commented Kooyenga. “The Governor gave a healthy increase to the UW and we just simply pulled back some of that increase. We didn’t pull back a billion dollars to say ‘oh, a billion bucks, lets spend it!’ No, we held the university harmless.”

“The rest of the country is talking about how you can control student debt. Well, right here we’re putting our money where our mouth is and making sure that tuition is affordable at the University of Wisconsin.”