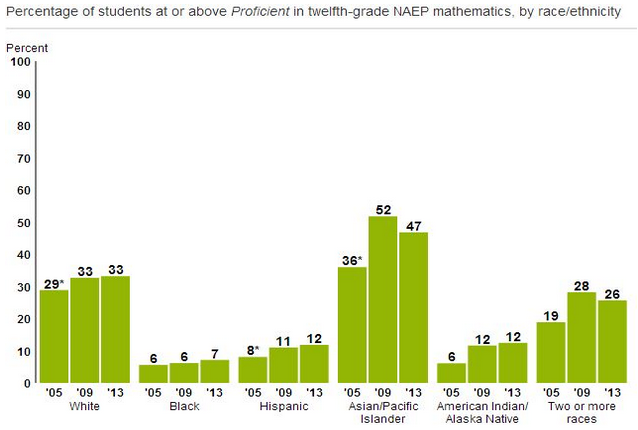 Newly-released NAEP data shows that America’s high school seniors in 2013 made no progress in reading and mathematics when compared to their performance in 2009. However, that’s not the only problem the country’s 12th-grade students are facing. These pupils are also dealing with an issue that has plagued Wisconsin for years – a significant achievement gap between students of different racial backgrounds.

Data from the National Assessment of Educational Progress (NAEP) showed that there has been no progress in 12th grade scores since 2009. This lack of movement runs counter to the nation’s NAEP scores in fourth and eighth grade, where small but steady increases have been the norm for the past two decades. Thirty-eight percent of America’s high school seniors rated as “proficient” or better when it came to reading in 2013. That number fell to 26 percent in mathematics.

Courtesy of the U.S. Department of Education.

A closer look at breakout data shows significant differences when you look at average scores by race. While 33 percent of white students earned “proficient” marks in math, only 12 percent of Hispanic students and seven percent of black students could claim the same. These gaps held steady when applied to 12th grade reading scores as well.

These figures cover approximately 92,000 students from 11 states that volunteered to be part of this NAEP pilot program. Wisconsin was not one of the states that participated. For more information on these NAEP results, click here to visit the Department of Education’s official release of this year’s data.