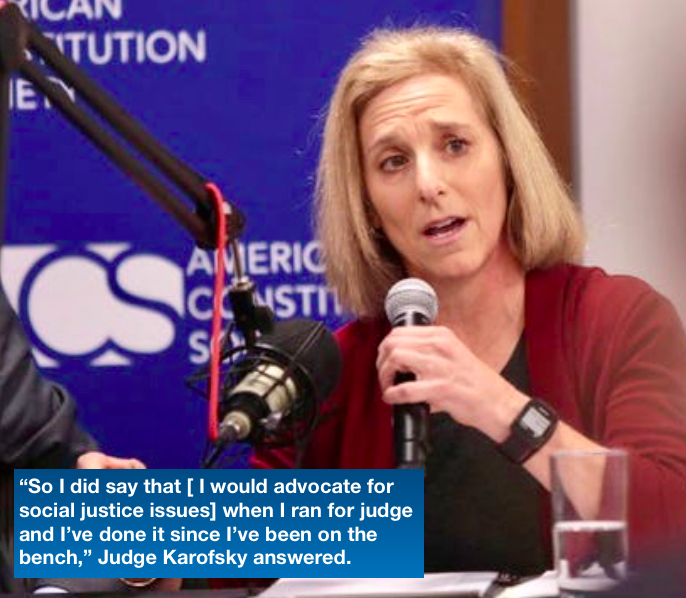 Politicians by their nature need to be whoever you want them to be, and they take great pains to convince you that they are exactly who you need them to be.  Their very existence depends on it.

Rarely, then, do they drop all pretense of what they present to the world and reveal themselves for who and what they really are.

Invariably, it takes a hidden camera to find it.

“You said that when you were running for Dane County judge that you’d be able to advocate for social justice issues. How do you plan on doing that on the Wisconsin Supreme Court?” a member of the University of Wisconsin Pre-Law Society asked Supreme Court candidate Jill Karofsky during a meeting caught on hidden camera late last year.

“So I did say that when I ran for judge and I’ve done it since I’ve been on the bench,” Karofsky answered without hesitation. “As a Wisconsin Supreme Court Justice I’d do it just the way I do it now.”

In a rare moment of total honesty, Karofsky admitted and promised that she will be a social justice Justice.

“So I did say that [ I would advocate for social justice issues] when I ran for judge and I’ve done it since I’ve been on the bench,” Karofsky answered.

“You have to get out into the communities and listen to what those problems are,” she continued.  “Listen to public defenders [and] listen to the issues that they have, listen to victims of crime, get up to the prisons and understand what it’s like to be incarcerated, and then continue to have conversations about how it can be changed.

“Look, I won’t be able to pass any laws, right?  But I’ll be able to listen and talk about what I see.  I believe that we need to reform the criminal justice system in the State of Wisconsin.  We have over 23,000 people incarcerated in the state—four times as many as they have next door in Minnesota.”

She also admitted that she will be a poorly informed social justice Justice.  While Wisconsin does indeed have more than 23,000 inmates in its prison system, Minnesota has about 11,000; less than half of Wisconsin’s state prison population but far less than the “four times as many” lie that Karofsky told so as to better rail against it.

This, too, is misleading at best and completely dishonest at worst.  Funding for education in Wisconsin goes to the University of Wisconsin System and individual school districts directly, so the Department of Education itself—a relatively small agency that provides only oversight and support for these districts—does not need the massive budget that, say, the Department of Corrections does.

She rather obviously means, though, that Wisconsin spends far more on incarceration than it does on education, and this is an absolute lie.  Total spending on the Department of Corrections in the 2019-2021 biennial budget is $2.68 billion.  Spending on the UW System alone is nearly six times that at $12.6 billion.  In addition, Wisconsin will spend $14.57 billion this biennium on K-12 education through state aid.

And Jill Karofsky was only truly honest when she thought no one was really listening.

“People kind of listen to me now, but a State Supreme Court Justice walks into the room and everyone listens to that person.  You’re a few steps up on the bully pulpit.”

In other words, Karofsky sees a seat on the highest court in the state as little more than a louder megaphone for her to espouse her personal political and socioeconomic opinions, especially regarding Wisconsin’s criminal justice system.

She advocates for a system of social justice with herself as one of Wisconsin’s moral leaders; making decisions based not on the Constitution, statutes, or case law, but rather on what just feels right.

That is the dangerous essence of the modern social justice movement: None are equal before the law, but rather are judged on how sympathetic they are to those who will decide their fate.

Karofsky sees a seat on the State Supreme Court as little more than a louder megaphone for her to espouse her personal political and socioeconomic opinions.

Karofsky herself admitted that this is how she has judged cases in the Dane County Circuit Court and how she will judge cases on the Wisconsin Supreme Court.  Needless to say, this flies in the face of pretty much every notion of constitutional and ethical jurisprudence in this country, but hey, Karofsky wouldn’t be the only social justice Justice on the Supreme Court.

“I’ve watched Justice [Rebecca] Dallet,” Karofsky said. “She travels all around the country talking about [social justice issues], listening about other places that have made reforms.”

The aim, of course, is to make those reforms here; not through a law passed by the Wisconsin Legislature and signed by the state’s Governor, but through judicial fiat.

In a rare moment of honesty, Karofsky revealed exactly what sort of Supreme Court Justice she would be and how she would unethically use her position as a “bully pulpit” from which she can advance her personal policy preferences.

When she thought no one could hear, she told Wisconsin exactly who she is.  Now it’s up to Wisconsin to listen.

The Supreme Court Race Comes Down to Activism vs. Principle