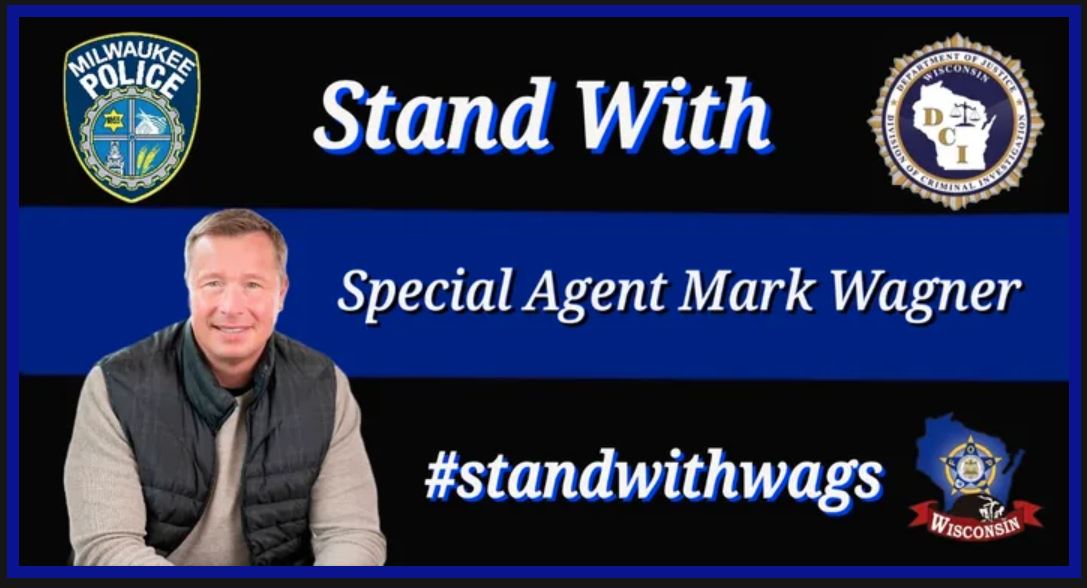 Mark Wagner’s has been a life of service.  After 23 years as a decorated narcotics detective with the Milwaukee Police Department, he knew he still had more to give and in 2017 joined the Wisconsin Department of Justice’s Division of Criminal Investigation.

So dedicated to others is he that two years ago he donated a kidney to his longtime Milwaukee Police partner John Kuspa.

“To say I’m grateful is an understatement,” John told Froedtert and the Medical College after the procedure. “It’s like someone taking a bullet for you when you’re in the line of duty. But that’s what we do in law enforcement. We sacrifice for others, and that’s just how Mark is.”

On February 3rd, Mark was serving a Department of Corrections warrant along with a team of 20 other law enforcement from multiple agencies on Quadren Wilson, a dangerous career criminal with 24 criminal convictions on his record (including six felonies).  Three of those felonies were for fleeing or eluding arrest, and three misdemeanors were for resisting arrest.  Nothing about him suggested that Wilson would go willingly with Mark and his arrest team.

Wilson was wanted on suspicion of supplying the fentanyl that killed a buyer in an overdose, and officers knew that he would almost certainly try to run when they came to take him in.  After the team received a tip that Wilson was at a park in Madison the morning of February 3rd, they moved in.  Officers used their SUVs to pin Wilson’s vehicle from the front and behind and bring it to a stop on the side of the road.

Mark approached the vehicle with his sidearm drawn and a shield in his hand.  Another officer followed pointing a rifle at Wilson.  They ordered him to show him their hands, but Wilson refused and revved the engine.  Smoke billowed from the spinning tires as Wilson floored it in a desperate attempt to get away.  He refused to show his hands, and Mark said he was fidgeting with something in his right hand as he continued to rev his engine.

Mark thought he had a gun.

Wilson’s windows were so darkly tinted that it was nearly impossible to see inside the vehicle, and another officer used a crowbar to smash the rear driver’s side window to let in more light so that officers could see exactly what Wilson was doing.  Suddenly, Wilson reached down with his left hand and then jerked both hands up.

Mark heard a loud sound he thought was a gunshot and fell backward, thinking he had been shot.  Almost simultaneously, he fired his gun, striking Wilson once in the back.  The second officer, thinking Mark had been shot, fired into the car, but missed.

Wilson was hospitalized twice because of his injuries but survived and is now serving three years in prison on charges of fentanyl delivery and cocaine possession.  No firearm was ever recovered from his vehicle and it is still unclear what sound Mark heard (or thought he heard) that caused him to fall backward and fire his weapon.

Last week, after reviewing the case for more than seven months, Dane County District Attorney Ismael Ozanee charged Mark Wagner with second degree recklessly endangering safety through the use of a dangerous weapon.  If convicted, Mark faces a maximum sentence of 10 years in prison.

A life of service may well result in serving time, which would be a grave injustice since even Ozanne’s criminal complaint reveals that Mark’s use of force was completely justified.

A Division of Criminal Investigation agent “may use deadly force only when the agent reasonably believes they are facing an imminent threat of death or great bodily harm to themselves or others.”  Wilson was a criminal suspect who has in the past committed multiple violent crimes, including resisting arrest and criminal escape.  He was squealing his tires while trying to get away, refused to show his hands, and then suddenly jerked them in a way that would cause any reasonable officer to believe that he had a gun or at the very least meant the officer some harm as he tried to escape.

In 1989, the Supreme Court determined that an officers’ use of force “must be judged from the perspective of a reasonable officer on the scene, rather than with the 20/20 vision of hindsight.”  Yet that is exactly what Ozanne is attempting to do.  Nearly eight months after the incident, which happened in a millisecond, he is charging an officer with a shooting that even the facts that Ozanne has presented in the criminal complaint reveal was reasonable.

In a vehicle with very darkly tinted windows, Mark saw a suspect revving his engine and squealing his tires in an effort to get away from law enforcement.  That suspect refused repeated commands to show his hands and reached below him in what could reasonably be interpreted to be an attempt to grab a weapon to help him facilitate his escape.  The suspect then without warning jerked both of his hands up.  Mark then heard some sort of noise that caused him to fall back and, in what he reasonably believed to be self-defense after he had been shot at (or shot), fired his gun at the suspect.

The reasonableness of this officer’s actions is further bolstered by the second officer behind him, who also fired at Wilson after thinking that Wilson had just shot Mark.  From the perspective of those reasonable officers, they were under attack from a suspect who was undeniably trying to escape custody.

Ozanne’s own criminal complaint makes that clear.  Despite this, he is charging Mark Wagner with a felony.  And Mark’s boss, Attorney General Josh Kaul, is refusing to stand with him.  In a tersely worded press release, Kaul said only that “DOJ will not be weighing in on the facts of this case as it moves through the judicial system in order to avoid having any possible impact on the outcome.  DOJ is evaluating this matter internally and will continue to do so to the extent possible without interfering with the ongoing case.”

No generalized statement of support for his brave officer or, for that matter, any of the brave officers of the Division of Criminal Investigation; just a short, sterile acknowledgment of the charge.  Well, if the Attorney General won’t stand with Mark, maybe the public will.

Mark’s friends in law enforcement have established a website, StandWithWags.com, to take donations for Mark’s legal defense and sell “Stand with Wags” shirts to help Mark and his family fight this injustice.  One hopes all of Wisconsin stands with them.

For more than two years, this state has seen its law enforcement officers from Kenosha to Milwaukee to Madison demonized, defunded, and demoralized, and now one is being decidedly persecuted.  This war on cops has gone on long enough.  It’s time to fight back, to take a stand, to stand up and support those who have dedicated their lives to serving.

It’s time to Stand with Wags. 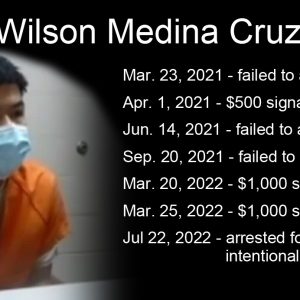 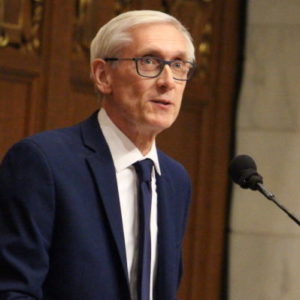