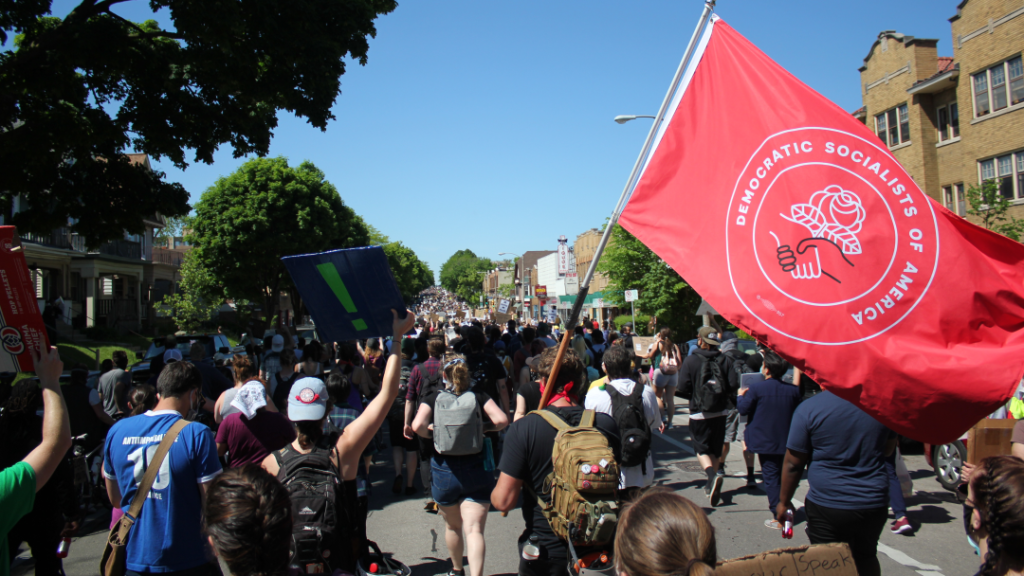 Wisconsin Democrats will be swapping out two of its most radical members in the State Assembly this January with two individuals who might be even more radical.

Darrin Madison and Ryan Clancy are members of the Democratic Socialists of America (DSA) running as Democrats. Both are running unopposed in November. Clancy ran unopposed in the Democrat primary as well.

Bowen and Brostoff were key figures in the 2020 insurgency in Wauwatosa. Throughout that summer, police played a cat-and-mouse game with the “People’s Revolution,” a Marxist group seeking revenge over a police officer shooting an armed suspect. They used mob actions to routinely shut down major thoroughfares, terrorize public officials, and vandalize homes and businesses. They even fire shots into the targeted police officer’s home. Brostoff and Bowen participated in those actions, and Bowen even issued a phony statement to cover up the shooting at the officer’s home. They were never held accountable for these actions.

Despite their radical activities, Bowen and Brostoff always maintained their identity as Democrats. Madison and Clancy, on the other hand, openly identify as socialists. Appearing on the ballot as “Democrats” doesn’t change that. Third party candidates regularly pose as either Republicans or Democrats to improve their chances at the ballot box. Several Libertarian candidates ran as Republicans in Wisconsin Assembly races in 2020.

However, there is a big difference between the Socialist/Democrat and the Libertarian/Republican pairings. Libertarians generally maintain their distance from Republicans, while the SDA seems to be merging with the Democrat Party. Bernie Sanders identifies as a democratic socialist and has been a trailblazer for the SDA into the Democrat Party. Hundreds of SDA members planned to attend the 2020 Democratic National Convention before it was moved to a virtual format.

SDA’s 2021 platform reveals its full agenda, which overlaps with many Democrat Party objectives and serves as a roadmap for where Democrats could go next. Its ultimate goal is to replace the US Constitution, and replace it with a socialist one. That should make it awkward and controversial when Madison and Clancy take the oath of office in January and swear to “support the constitution of the United States and the constitution of the state of Wisconsin, and will faithfully discharge the duties of said office to the best of my ability. So help me God.”

“Democratic socialism is a process meant to achieve the end of the international system of capitalistic competition,” according to DSA. “U.S. workers will win democratic control of the economy when the infection is cured; that means when the machinery of imperial domination of other nations is ended.”

Clancy and Madison plan to take that ideology onto the Assembly floor to debate conservative ideas.

“Not just this is a bad policy or a horrific or a terrible policy, we should vote against it, but because this is rooted in capitalism, this is why we need to change the system behind it. We need systemic change, not just nibbling around the edges and trying to reform things that aren’t going to work because they’re never going to work,” Clancy said on a DSA podcast.

That systematic change starts with the current Democrat Party agenda. SDA supports passing HR 1 (the “For the People Act”), the Green New Deal, ending the filibuster, universal paid parental leave, minor gender transition surgery without parental consent, and Medicare for all. Those are all familiar Democrat policies.

Some of SDA’s other policy goals are already building support among Democrats like reparations, cancelling all student loan debt, free college, and free abortions on demand. SDA also wants to completely abolish prisons and the police, but plans to do so incrementally by first defunding and then dismantling them.

After the shooting on Water Street during the NBA Playoffs, the city imposed a curfew that weekend for everyone under 21. For DSA-Milwaukee, this was unacceptable. It issued a statement, “curfews are a powerful tool of oppression rooted in racism and classism. This curfew invites increased police presence to the streets of Milwaukee, and certainly police presence is a lead up to increasing violence against citizens at the hands of the police who enforce laws with impunity.”

Statements like that will have increased influence when they’re being delivered on the Assembly floor by “Democrat” lawmakers.

“I’ve committed my life to fighting systematic oppression from racism to heterosexism to ablism to capitalism,” Madison told DSA-Milwaukee that he intends to continue doing that in the legislature.

Since then, DSA has been growing and building momentum. It claims that 67% of its candidates and initiatives won in November 2020. There are currently 38 DSA party members in state legislatures around the country (out of 7,383 total seats). Wisconsin is about to become overrepresented in those statistics.