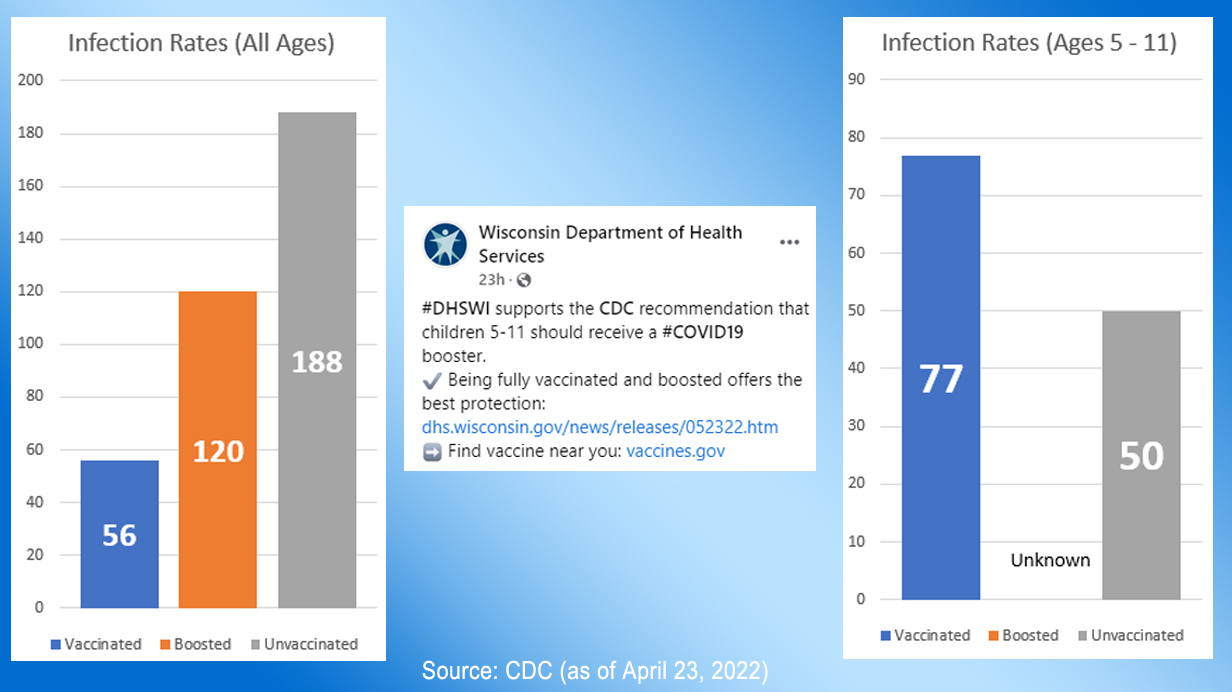 Why do government officials want you to vaccinate your child when that will increase their chances of catching Covid (according to their own data)?

Why do they want you to get your child a booster shot when that increases their chances of catching Covid even higher than that (again, according to their own data)?

Why has DHS stopped reporting “illness after vaccination” data to the public right as these trends were starting to emerge?

These are obviously very important questions.

The Centers for Disease Control (CDC) tracks Covid-19 infection rates for various age groups according to vaccination status for a good portion of the country. 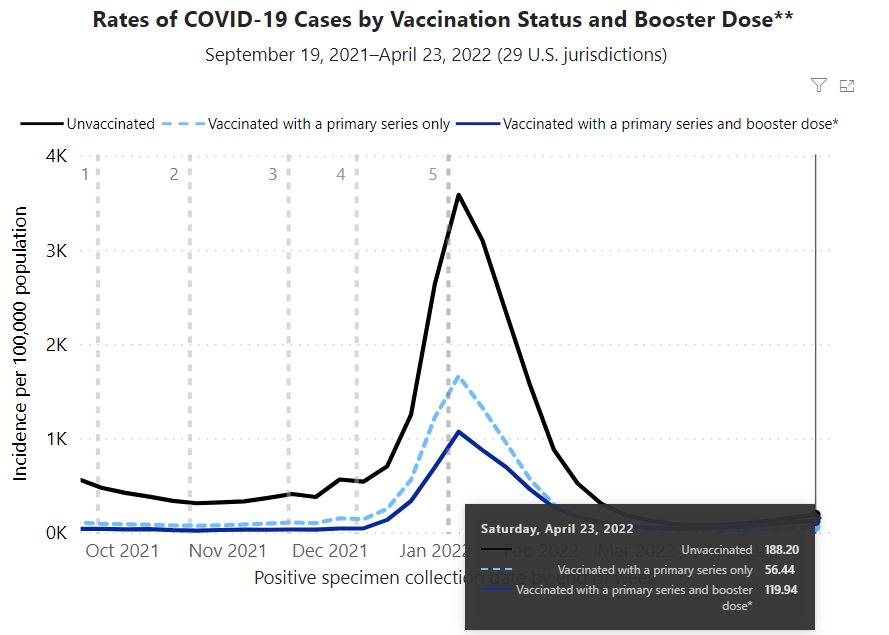 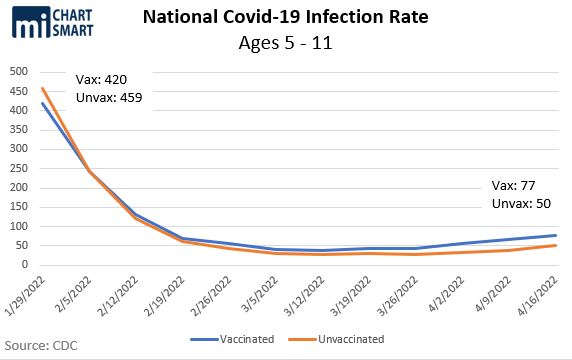 And yet, on Thursday, May 19th, the CDC’s Advisory Committee on Immunization Practices (ACIP) recommended that 5- to 11-year-olds get a booster shot. That flies in the face of the CDC’s own data.

The state level data in Wisconsin should raise even more questions.

The Wisconsin Department of Health Services (DHS) reported in April that the infection rate among vaccinated children aged 5 to 11 was 2.4 times higher than their unvaccinated peers. The rate was 326 per 100,000 among the vaccinated and 134 per 100,000 for the unvaccinated. 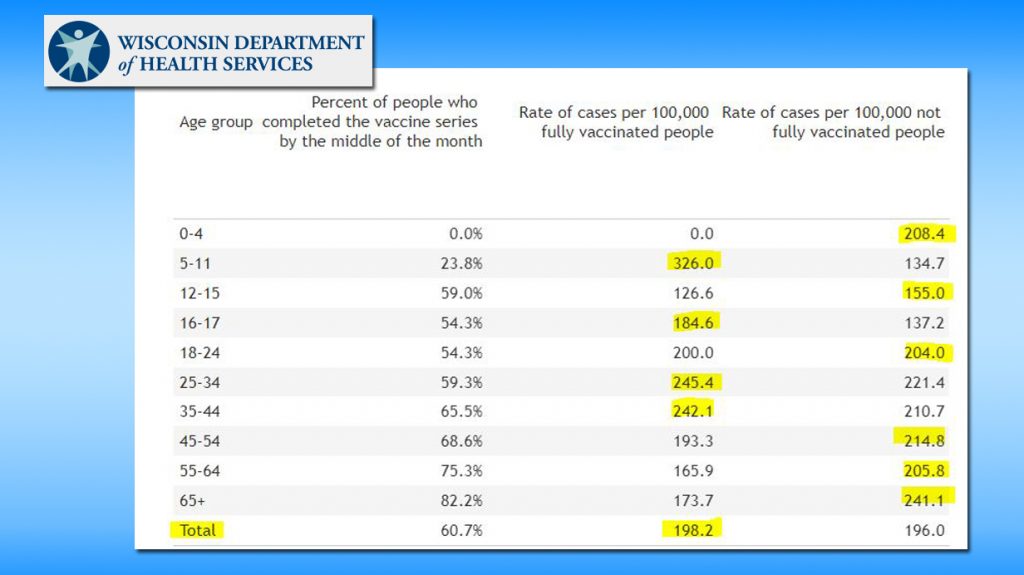 And yet, on Monday, May 23rd, DHS recommended that everyone get their 5- to 11-year-olds boosted following the advice of the CDC.

“Clinical research demonstrated that a third dose of the Pfizer COVID-19 vaccine given after the second dose to children ages 5-11 helps give added protection against COVID-19, including infections from Omicron,” said Stephanie Schauer, Ph.D., Division of Public Health Immunization Program Manager.

Wisconsin DHS points to a study from the US Department of Health and Human Services (HHS) to justify its recommendation. The study examined health outcomes for children between the ages of 5 and 15 years from July 2021 to February 12, 2022, and concluded that two doses of the Pfizer vaccine reduced the risk of Omicron infection by 31%. It used those findings to recommend that children stay up to date on their Covid vaccinations.

DHS is also dragging its feet. It was supposed to update its “illness after vaccination” dataset on May 20th, according to its website. That provides infection, hospitalization, and death rates by vaccination status in Wisconsin. It’s now May 24th, and it still has not been updated. The MacIver Institute asked DHS on May 17th if it planned to update the data this month, but has not yet received a response.

The last time DHS updated the data was on April 14th. That was a big deal, because it had not been updated in over two months. DHS told MacIver that it was upgrading its website. A lot happened during that interlude.

Previously, DHS’ data showed that unvaccinated individuals had higher rates of infection, hospitalization, and death. That’s no longer the case.

Officials might try to pivot and point towards hospitalization data. However, that’s not always helpful to their cause either. In Wisconsin, the hospitalization rate among vaccinated 12- to 15-year-olds (2.3 per 100,000) is significantly higher than the rate for their unvaccinated peers (1.6 per 100,000).

The age-breakdowns on DHS’ Illness After Vaccination webpage is obviously helpful in fact checking official policies. Unfortunately, DHS only posts that data for 30 days at a time. Each time the page is updated, the previous month’s data is replaced with the latest data. The old data is deleted. That means we don’t know how these trends developed between January and April while the website was being upgraded. If DHS does not update it again soon, we might never know what the age-breakdowns were for April. It is intriguing how DHS stopped updating the page as soon as the data no longer supported official policies such as vaccinating and now boosting children. It seems they can no longer point to the data to support their policies, and not surprisingly, their interest in the data is fading. 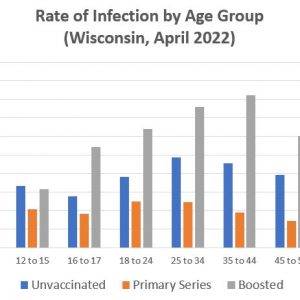 Highest Infection Rates Are Among The Boosted, According To DHS