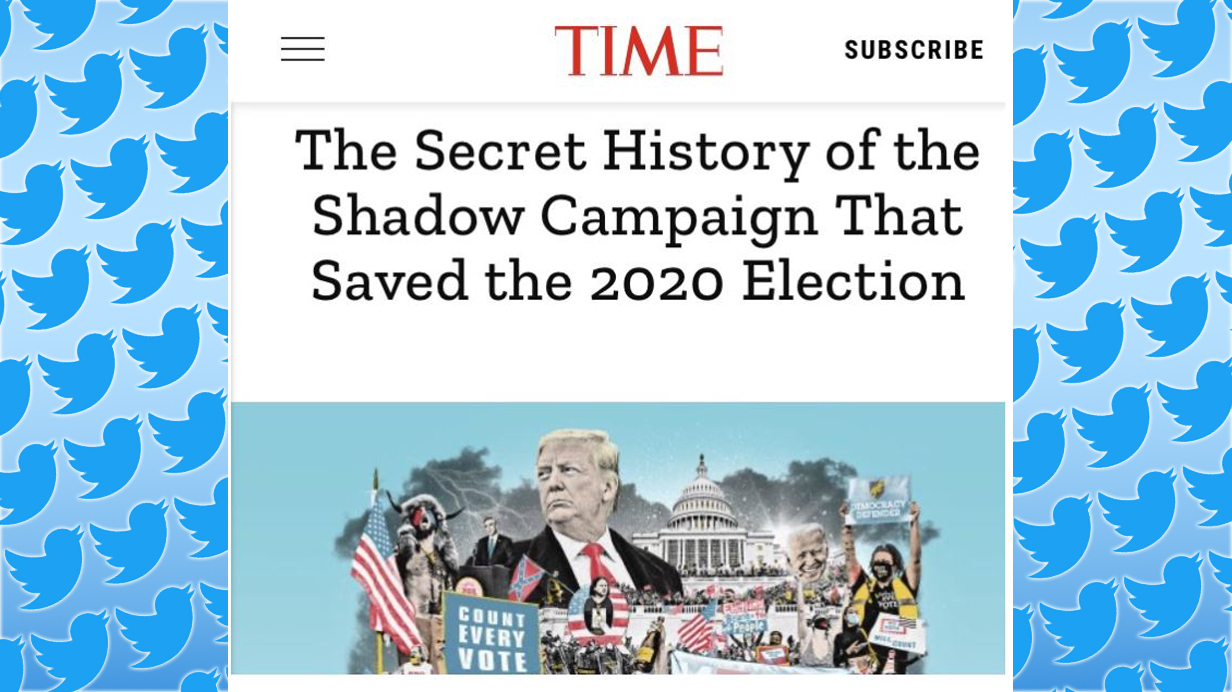 Of all the hysterical liberal reactions to Elon Musk’s purchase of Twitter on Monday, MSNBC host Ari Melber’s was easily the most revealing.

“If you own all of Twitter or Facebook or what have you, you don’t have to explain yourself,” he gravely intoned during his show Monday evening. “You don’t even have to be transparent. You could secretly ban one party’s candidate or all of it candidates, all of its nominees, or you could just secretly turn down the reach of their stuff and turn up the reach of something else, and the rest of us might not even find out about it ‘til after the election.”

You don’t say.  This was in fact the way the left used social media to win the 2020 presidential election.  They even admitted it openly in a stunning yet largely forgotten February 2021 article in Time entitled “The Secret History of the Shadow Campaign that Saved the 2020 Election.”

“For more than a year, a loosely organized coalition of operatives scrambled to shore up America’s institutions as they came under simultaneous attack from a remorseless pandemic and an autocratically inclined President,” wrote reporter Molly Ball.  “Their work touched every aspect of the election.”

And they wanted credit for it, Ball continued, “even though it sounds like a paranoid fever dream–a well-funded cabal of powerful people, ranging across industries and ideologies, working together behind the scenes to influence perceptions, change rules and laws, steer media coverage and control the flow of information.”

Their aim, they insisted, wasn’t to rig the election but rather to “fortify” it against then-President Donald Trump and his allies, whom they believed to be a threat to democracy itself.

“Their work touched every aspect of the election. They got states to change voting systems and laws and helped secure hundreds of millions in public and private funding. They fended off voter-suppression lawsuits, recruited armies of poll workers and got millions of people to vote by mail for the first time. They successfully pressured social media companies to take a harder line against disinformation and used data-driven strategies to fight viral smears.”

The final piece was critical, especially in the waning days of the campaign, when an October surprise in the form of Hunter Biden’s laptop threatened to derail his father’s candidacy and undo the organized left’s hard work.

The New York Post’s exclusive story dropped like a grenade less than a month before Election Day, providing “smoking-gun emails” showing that the younger Biden introduced his father “to a top executive at a Ukrainian energy firm less than a year before the elder Biden pressured government officials in Ukraine into firing a prosecutor who was investigating the company.”

The emails, the Post explained, were obtained from a computer dropped off and apparently forgotten at a repair shop in Delaware.  Under the terms of the repair agreement, the store’s owner took possession of the laptop when it was deemed to be abandoned.  Twitter and Facebook, though, determined without any evidence that the emails were actually “hacked materials” and thus distributed in violation of their terms of use agreements.

Facebook quickly acted to limit the reach of the story, while Twitter took the extraordinary step of locking the Post’s account and preventing other users from sharing its story or even pictures from it.  Neither Hunter Biden nor the Joe Biden presidential campaign denied that the laptop was Hunter’s, and the younger Biden’s business partner, Tony Bobulinski, went on the record a few days later with documents that confirmed the Post’s reporting, which seemed to uncover an international bribery scheme.

It didn’t matter; once 50 obviously partisan intelligence officials issued an evidence-free statement calling the laptop materials “Russian disinformation,” it was determined that they would be censored in both legacy and social media.

Of course, more than a year after Biden was safely elected, both The New York Times and Washington Post confirmed that the laptop was genuine, but the censorship did its job: A Media Research Center poll of swing state voters confirmed that 16 percent of Biden supporters would have changed their votes had they heard of the laptop story, including four percent who would have switched their vote to Trump.

This obviously would have swung the entire election to Trump, but that would have been an unacceptable result for the leftist cabal intent on “fortifying” democracy by stacking the deck against him.  In light of the Media Research Center’s findings, the use of social media censorship was very possibly the most effective way they did it.

And naturally they had to brag about it in Time.

“Trump’s lies and conspiracy theories, the viral force of social media and the involvement of foreign meddlers made disinformation a broader, deeper threat to the 2020 vote,” Ball reported.  “Laura Quinn, a veteran progressive operative who co-founded Catalist, began studying this problem a few years ago. She piloted a nameless, secret project, which she has never before publicly discussed, that tracked disinformation online and tried to figure out how to combat it.”

She ultimately concluded that engaging with this supposedly “toxic content” or trying to debunk it was ineffective, so “the solution, she concluded, was to pressure platforms to enforce their rules, both by removing content or accounts that spread disinformation and by more aggressively policing it in the first place.”

This research armed liberal activists to pressure social media companies like Twitter and Facebook to far more aggressively and creatively enforce their rules, prompting a crackdown on “disinformation” that was in fact completely accurate.  Because it was harmful to the effort to “save democracy” and defeat the “autocratic” Trump, it was censored.

“Democracy won in the end,” Ball concluded.  “The will of the people prevailed. But it’s crazy, in retrospect, that this is what it took to put on an election in the United States of America.”

Thus reveals the real threat of Elon Musk’s Twitter takeover: If it is no longer possible to suppress factual information in the name of rescuing democracy from its alleged enemies, then those enemies (read: Republicans) might start winning more elections.

And that is simply unacceptable.

Dan O’Donnell is a talk show host with News/Talk 1130 WISN in Milwaukee and 1310 WIBA in Madison, a frequent contributor to Newsmax TV and NewsNation, and a columnist for the John K. MacIver Institute.