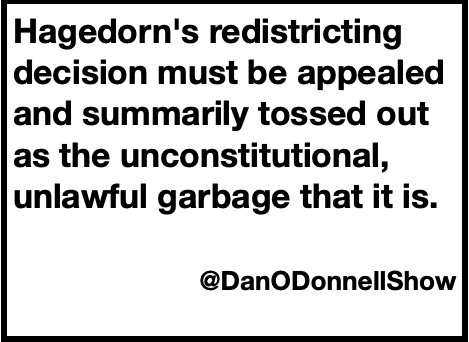 Of all the inexplicable, terrible rulings from alleged conservative Wisconsin Supreme Court Justice Brian Hagedorn, his majority opinion in the state’s redistricting case just might be the worst.  It manages to ignore the US and Wisconsin Constitutions, the Voting Rights Act, while controlling US and Wisconsin Supreme Court precedent while simultaneously allowing the very sort of partisan gerrymandering it sought to prevent.

Writing for a 4-3 majority that included the Supreme Court’s three liberals, Hagedorn concluded that legislative maps put forward by Democrat Governor Tony Evers were “superior to every other proposal,” including that of the Republican-controlled Wisconsin Legislature, because “no maps from any other party perform nearly as well as the Governor’s on core retention.”

“Core retention,” Hagedorn explains, is the “measure of voters who remain in their prior district” and thus “the best metric of least change.” In November, the Court had ruled that since the Governor and Legislature could not agree on new maps based on the 2020 Census, they had to draw districts that represented the “least change” from the maps drawn in 2011 following the 2010 Census while still accounting for population changes over the past decade.

“Nowhere in that opinion did we use the phrase ‘core retention,’” Chief Justice Annette Ziegler pointedly noted in her dissent to Thursday’s ruling.  “The core retention analysis in the majority is an invention, made after the fact to justify a policy preference.”

In determining which maps made the “least change” to the prior maps, the Court was legally and constitutionally bound to consider additional factors such as population deviation and splits in local government voters.  As much as possible, district maps must keep voters in the same city in the same congressional and state legislative districts, but Evers’ maps ignored this altogether.

This directly violates Article IV, Section 4 of the Wisconsin Constitution, which requires “districts to be bounded by county, precinct, town or ward lines, to consist of contiguous territory and be in as compact form as practicable.” 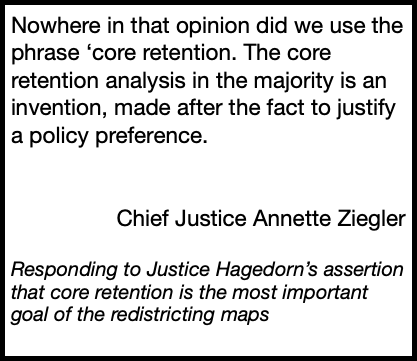 Far worse, Evers’ maps represent an unconstitutional racial gerrymander that blatantly violates both the Voting Rights Act and the 14th Amendment’s Equal Protection Clause.  Both make it unlawful for legislative maps to be drawn solely on the basis of race, yet that is precisely what Evers did.

In Milwaukee County, Evers explicitly stated his intention “to produce seven majority Black districts in the [State] Assembly,” and did so by creating a map that featured seven districts with almost exactly 51% black majorities.  Both the intent and result were to use the race of voters as the sole criterion for drawing district lines, and because of this, Evers’ maps are facially unconstitutional and unlawful.

As the United States Supreme Court held in Miller v. Johnson in 1995¸ “when the State assigns voters on the basis of race, it engages in the offensive and demeaning assumption that voters of a particular race, because of their race, think alike, share the same political interests, and will prefer the same candidates at the polls.  Race-based assignments embody stereotypes that treat individuals as the product of their race, evaluating their thoughts and efforts—their very worth as citizens—according to a criterion barred to the Government by history and the Constitution.”

Yet that’s precisely what Evers’ maps did, and what Hagedorn’s decision allowed.  So badly did Hagedorn miss the forest of constitutional jurisprudence for the trees of his “core retention” analysis that he unwittingly signed off on the very sort of racial discrimination the Voting Rights Act was enacted to avoid.

The only valid justification for violating both this law and the Equal Protection Clause would be to remedy a prior Voting Rights Act violation.  If, say, the existing maps were deliberately drawn to divide the black vote and prevent black candidates from being elected, then redrawing district lines to undo this racism would be permissible.

There is no such violation in Milwaukee County.  Congresswoman Gwen Moore, who is black, routinely wins reelection with 75% of the vote in a district that is just 33% black.  Were her district illegally racially gerrymandered, this would be impossible.

Now, though, Milwaukee County is illegally racially gerrymandered, and the Wisconsin Supreme Court is perfectly fine with this.  One suspects that the U.S. Supreme Court will not be, as Hagedorn’s opinion blatantly contradicts the principles established in Miller v. Johnson.

It must, then, be appealed to the federal courts and summarily tossed out as the unconstitutional, unlawful garbage that it is.