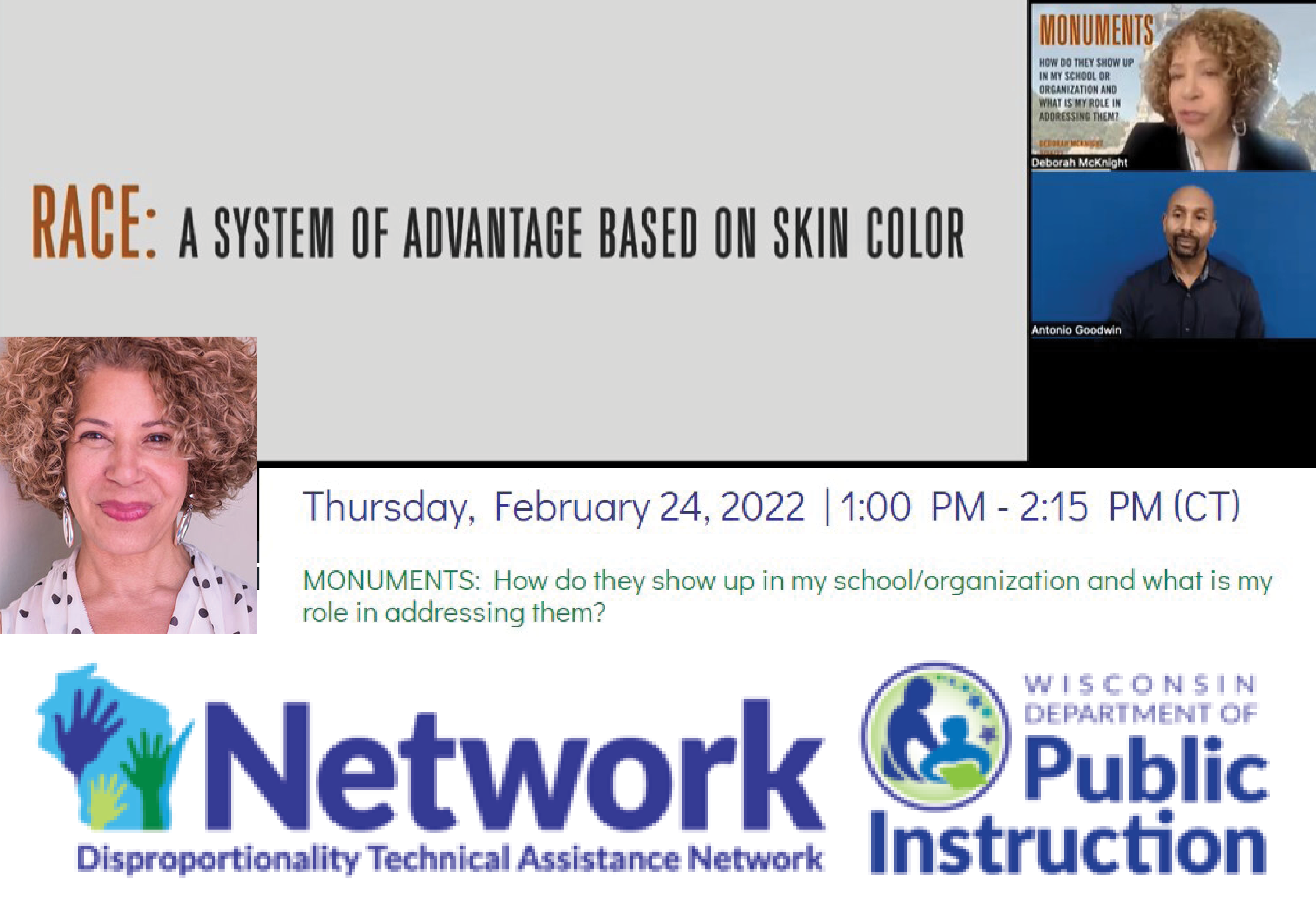 But wait, how many times have we heard this refrain from the educational establishment, political leaders on the left and the media?

Critical Race Theory is not in our classrooms.  Nope, no way.  Not anywhere. It’s all made up by racist partisans who want  to turn parents against teachers. 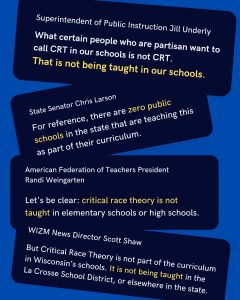 CRT deniers have a dirty little secret.  DPI regularly funds and sponsors training for Wisconsin teachers teaching them to bring CRT into our classrooms.

The education establishment and the media have tacitly agreed to use bogus shorthand descriptions of CRT as a harmless ‘academic framework’ that simply ‘looks at whether systems or policies perpetuate racism.’

That describes CRT about as accurately as describing a tornado as a slight breeze.

CRT has a decades-long, well-documented history and it is true that it got its start in the hallowed, post-civil-rights-era halls of academia with Harvard professor Derrick Bell.  In 1989, some of Bell’s former students held a workshop at UW Madison titled New Developments in Critical Race Theory.

For over 50 years the left has held tight to CRT, honing and expanding it. Today’s CRT is a far cry from academic navel-gazing about whether racism is systemic and it’s mainstream media malpractice to claim otherwise. 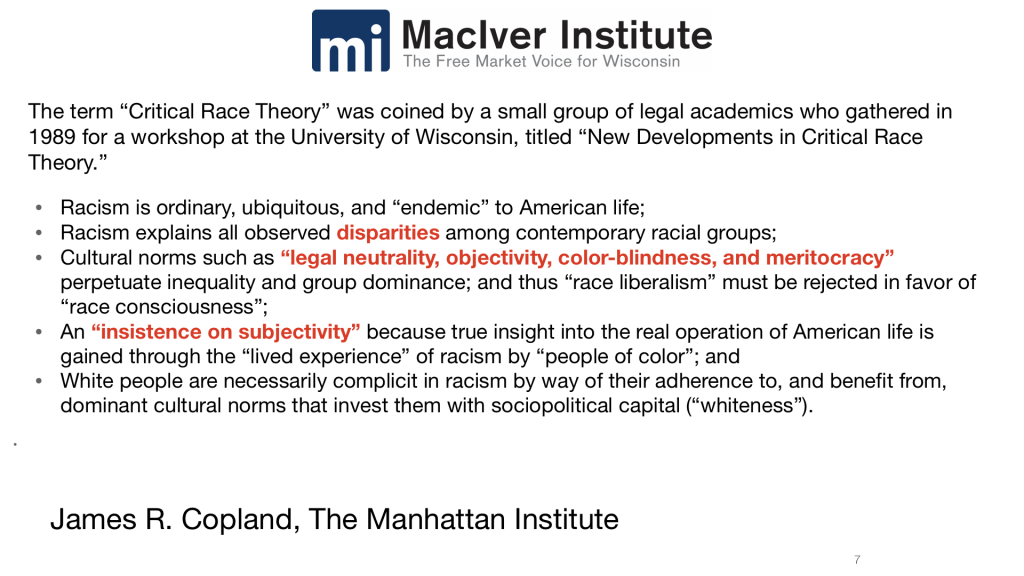 While the left and the media portray this newest iteration of America’s fight against CRT as sudden, new, purely-political opposition from only the right to an idea that’s been hanging around forever not bothering anyone, that’s also entirely false.  It’s not the first time CRT has taken the national stage or the first time Americans have rejected it.  Indeed,  both our previous Democratic presidents had to grapple with pushback against CRT during their terms.

In 1993, Clinton’s nomination of Lani Guinier to be assistant attorney general was withdrawn when public backlash over her ties to CRT caused congressional Democrats (including notably Joe Biden) to distance themselves from her.  Clinton, ever-attuned to political winds, didn’t just pull the nomination, he disavowed her writings.

And again in 2012 CRT made a ripple in the presidential race when a 1991 video of President Obama hugging Bell generated controversy, due to the professor’s frequent linking of white supremacy to CRT.

Scholars have been writing about CRT and education for at least a quarter century, and increasingly over time about its use in schools and its place in curricula.

Dr. Nicholas Daniel Hartlep, a former MPS teacher who received his PhD from UW- Milwaukee, focused his research on CRT as related to race, equity and the “improvement of education at the preK-12 level.” His 2009 paper Critical Race Theory: An Examination of its Past, Present, and Future Implications provides a primer on the history of CRT and its tenets.

The narrative that CRT is a legal-academic-thought-exercise that has never been used in classrooms is entirely false and has been false for well over a decade. 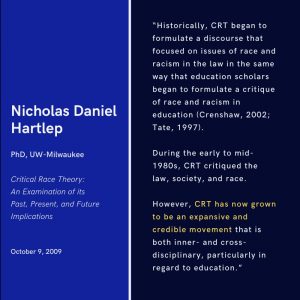 The 5 Fundamentals of CRT

The CRT Answer to Racism . . . is More Racism

One of the nation’s leading CRT  and antiracism scholars, Ibram Kendi pinpoints the solution to systemic racism as more racism: 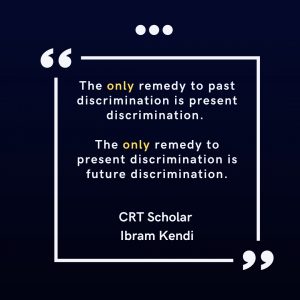 Any school with a diversity, equity and inclusion program, any school that teaches about systemic racism, white privilege, lived experience, social justice, safe spaces, microaggressions or anti-racism has embraced CRT.  The question isn’t who is using CRT in schools; it’s who isn’t.

CRT has been moving into the mainstream for decades and already has a strong foothold in public education.  A handy explanation for the abysmal achievement gap in Wisconsin, systemic racism neatly absolves educators from any accountability for their failure to teach minority students. How can anyone single out math teachers when 400 years of white Americans are really to blame?

When the pandemic hit, and education establishmentarians sent kids home to “learn” remotely, parents suddenly saw their children cast as racist, privileged oppressors who should feel shame for discrimination in the past. And if they defended themselves against those charges, they only proved how racist they were.

Never able to admit they may have gone too far, the education establishment implemented tried-and-true tactics: deny, distract and demean. 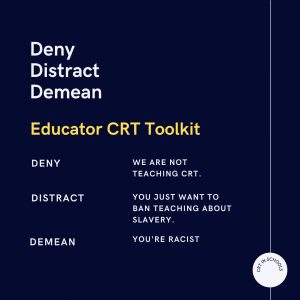 We Fund It. They Teach It.

Deniers have been fighting a CRT ban because they’ve already seen it entrenched in teacher training, in classrooms, in higher education, and at DPI.  DPI distributes funds to train educators on CRT principles specifically for their use in our classrooms.

As we’ve previously reported, the Disproportionality Technical Assistance Network aka “the Network” is a statewide collaboration with CESAs, local education agencies, higher education, community stakeholders and DPI, which provides federal dollars to the group. 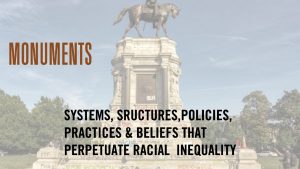 McKnight used the tearing down of confederate monuments as a metaphor for monuments of systemic racism we hold in our minds that also need to be destroyed, including special education, advanced placement, and discipline.

McKnight says AP classes are another tool to achieve segregation, taking white children out of general education classes to get them away from nonwhite children who are denied access to AP.

The characterization of both AP and special education as racial segregation ploys highlights a drive to deprive students of coursework geared to their level purely because the racial balance of the classes is not equitable. As more states and schools consider changes, parents worry that eliminating AP classes lowers academic standards for all simply to paper over poor achievement gap numbers.

Black parents say their children are often suspended for petty reasons, according to McKnight, like hugging another child. This disproportionate discipline of nonwhite students harms the family, McKnight says: parents lose hours and wages at work which could endanger their job, while the impacted children often drop out and commit crimes.

In short, McKnight channeled the (not so) soft bigotry of low expectations using the language of CRT: systemic racism, a rigged system of white privilege where nonwhite children are unable to succeed and driven to crime because there is no equity.  CRT in a nutshell.

Then McKnight focused on how important it is to get this CRT work into the classroom. This is a presentation for educators sponsored by the Wisconsin Department of Public Instruction, the agency in charge of K12 education in our state.  And this is the same CRT work DPI claims is not in our schools. 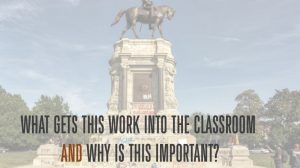 McKnight believes that it’s important to push the narrative that racism hurts white people.  She believes white people don’t understand that their racist decisions harm themselves, and if they did, they would support equity.  She recommended Dying of Whiteness and The Sum of Us, books that speak to the broad societal harm of racism, and reveal how racist white values like gun ownership, self-reliance, and lower taxes are literally killing working class whites.

She goes on to cite white supremacy as a top transnational threat and asserts that centering education around white students, which erases nonwhites from history, makes white students vulnerable to being recruited by white supremacist organizations.

If McKnight is to be believed, CRT in our schools – labeling white children as racist, and making them feel bad about their whiteness – stereotyping and oppression, Kendi’s “present discrimination,” will make them less likely to join a violent group.  We are also to believe that discrimination and oppression leads nonwhites to violence.

Finally, McKnight provided a list of resources for teachers to use in their classrooms.

Again, parents all over this state are told time and time again by politicians, school board members, administrators and teachers that CRT is not present in our K12 schools.  While at the same time they sponsor and fund training for teachers on CRT so they can can use it in the classroom.

Whether one supports or opposes using CRT in K-12, an authentic goal would be to start the policy discussion from a place of honesty.  It’s possible some teachers, mainstream media and politicians have not taken even minimal time to learn about what CRT is, and how long it has been part of our education discussions and systems, and instead simply parrot talking points.  That lack of effort or intellectual curiosity is no excuse for the continued stream of misinformation.

The issue has sparked the engagement of parents across the state, and the nation.  Their previous complacency with being unaware what their children were being taught cannot be the cause to ban their participation and engagement in the school districts they fund and to which they entrust their children.

We fund CRT, they teach CRT, and they use CRT in the classroom.  Let’s start from there.  Instead of resorting to name-calling and lies, it’s time for the education establishment to fess up and defend their position.  And well past time the mainstream media forced their hand. 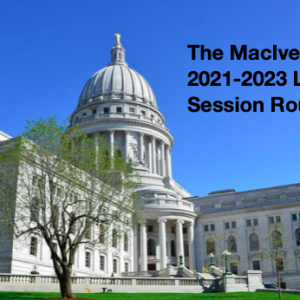