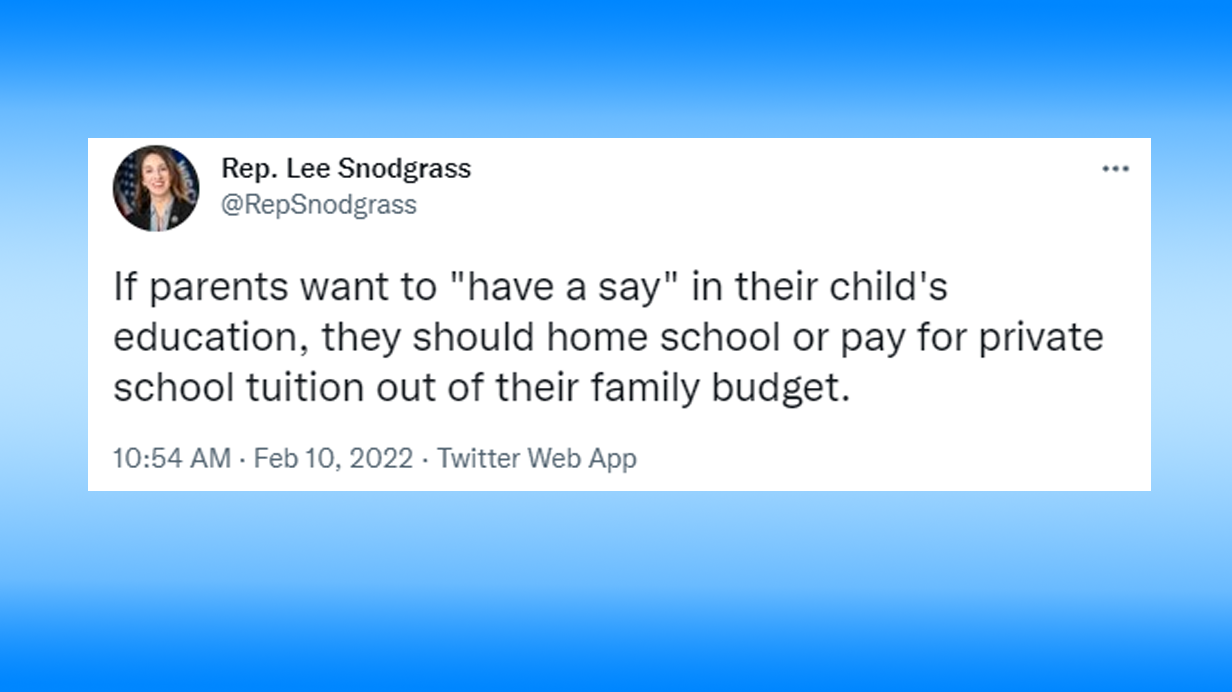 “Each day on Twitter there is one main character,” goes a well-known description of the social media service.  “The goal is to never be it.”

One day the main character might be a mayor claiming ice fishing can lead to prostitution in shanties, the next it could be a shoe company bizarrely posting a picture of bare breasts to advertise its sports bras.  Andy Warhol, it turns out, was wrong: In the future everyone is famous for 15,000 retweets.

On Thursday, it was Wisconsin Representative Lee Snodgrass—not for misspeaking and condemning the “gazpacho police,” but for mistakenly saying out loud what most Democrats have quietly believed for years.

“If parents want to ‘have a say’ in their child’s education,” she tweeted, “they should home school or pay for private school tuition out of their family budget.”

Before you could say “30-50 feral hogs,” Snodgrass’ tweet was everywhere.  Conservatives highlighted it as yet more proof that Democrats really do believe that parental rights end at the schoolhouse doors, while Snodgrass’ fellow liberals were horrified that she said the quiet part out loud.

“Parents are the first and best teachers our kids have, and we know parent involvement in their kids’ education is critical to ensuring every student’s success,” Wisconsin Governor Tony Evers said, making sure to add in a bit of whataboutism.  “Politicians on both sides of the aisle have to stop using our kids as political pawns. We should trust parents, educators, and schools to keep working together to do what’s best for our kids.”

Here’s the thing, though: Politicians on one side of the aisle don’t actually trust parents at all.  Virginia Democrat Terry McAuliffe made that abundantly clear during a gubernatorial debate in October.

The Democrat-controlled National School Boards Association (NSBA) even compared them with domestic terrorists and urged the Biden Administration to use the Patriot Act to investigate them!  Amazingly, Attorney General Merrick Garland agreed, and pledged in a memo to have the FBI lead the way in crafting a strategy for dealing with parents at school board meetings.

In recent weeks, it has become apparent that Biden’s own education secretary, Miguel Cardona, instructed the NSBA to craft its letter, opening the door for the Justice Department’s jackbooted thuggery.

After quickly deleting her tweet almost as soon as it went viral, Snodgrass issued a halfhearted apology and claimed her original statement “was lacking in nuance and easily misinterpreted.”

Only it wasn’t. At all. Snodgrass was perfectly clear.  And so was Jill Underly, Wisconsin’s Education Secretary (and a Democrat), in an “open letter to families and educators” a day later.

“Family engagement isn’t about yelling at school staff or suing your school board if they don’t do exactly as you demand,” she wrote.  “[Republican politicians] are talking about micromanaging curriculum and preying on our parental emotions during a traumatic time, all with the ulterior motive of placing suspicion on educators by weaponizing lessons about difficult topics, or by placing blame on schools for a pandemic they did not cause but are nonetheless supporting our children through.”

It’s not really parents’ fault, you see. They’ve just been radicalized—probably by Trump—into acting like terrorists.  For months, education leaders and elected Democrats alike have been unable to keep their contempt for parents quiet, and every so often they shout the revulsion that they normally whisper.

When Lee Snodgrass did, she became Twitter’s main character for a day.  But for so publicly exposing the utter contempt Democrats have for parents who dare to question their betters, she is a heroine.