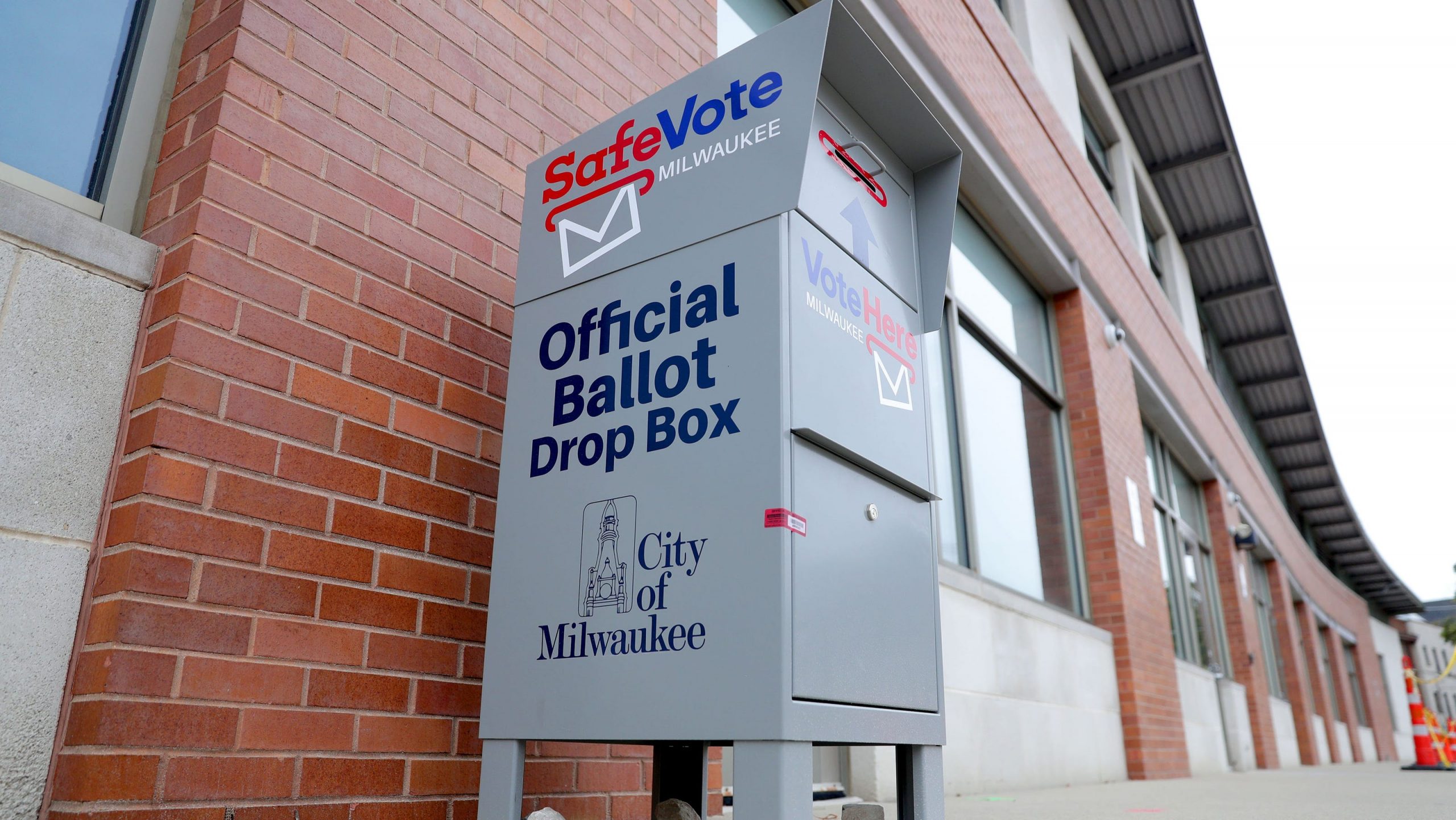 There seems to be some confusion about whether Wisconsin law might allow for ballot drop boxes. Dan O’Donnell clears it up: They most certainly are not.

@DanODonnellShow Despite clarity in statutes, WEC Administrator Wolfe instructed muni clerks to ignore the law & set up drop boxes ahead of the 2020 Election Click To Tweet @DanODonnellShow Placing a ballot in a drop box for a third party to pick up & deliver is neither directly mailed nor in-person delivery, therefore it is not a legal means of voting under WI law. Click To Tweet

Amid the debate over the use of ballot drop boxes in Wisconsin, there is a widespread misconception that they are somehow permissible under state law because they are not explicitly banned under state law.  They most certainly are not.

Wisconsin law is actually remarkably clear: There are precisely two legal methods of absentee voting—in person and by mail.  That’s it.  If a voter does not personally hand his or her absentee ballot to an election worker or mail it to the municipal clerk’s or city elections commission’s office, then the vote has not been lawfully cast.

Absentee voting is governed by Wisconsin Statute § 6.87, which plainly provides that all ballot envelopes “shall be mailed by the elector, or delivered in person, to the municipal clerk issuing” them.  This establishes that the only two legal ways to return an absentee ballot are to either mail the absentee ballot or hand-deliver it to the clerk.

Since placing a ballot in a drop box for a third party to pick up and deliver to the clerk’s office qualifies as neither a directly mailed nor in-person delivery, it is not a legal means of absentee voting under Wisconsin law.  In fact, the state’s election fraud statute—Wis. Stat. §12.13—makes it a crime punishable by six months in jail to “receive a ballot from or give a ballot to a person other than the election official in charge.”

The act of placing a ballot in a drop box for someone else to eventually take to the clerk’s office violates this statute because, by definition, it requires the voter to surrender his or her ballot to someone other than “the election official in charge” and thus break the legally required chain of custody. 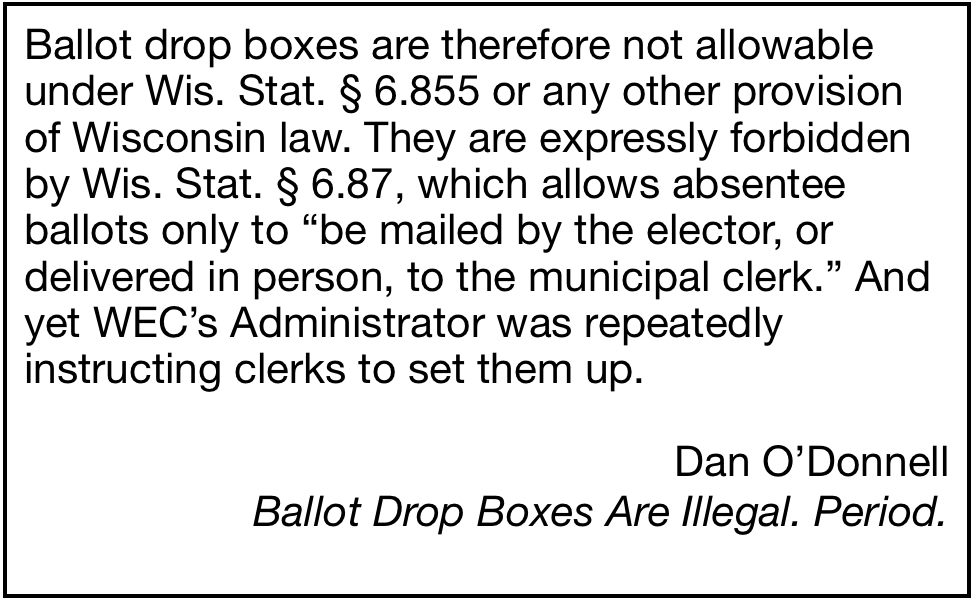 Despite this remarkable clarity in the statutes, the Wisconsin Elections Commission (WEC) Administrator Meagan Wolfe instructed the state’s municipal clerks to ignore the law and set up drop boxes ahead of the 2020 Spring Election.

In a March 31, 2020 memo to clerks, Wolfe listed as one of the “frequently asked questions” about administering an election during the then-brand new coronavirus pandemic “Can I establish drop boxes, or other similar options, for voters to return ballots without having to mail them back?”

Amazingly (and rather stupidly), Wolfe confirmed that WEC would simply be ignoring Wis. Stat. § 6.87’s requirement that absentee ballots either be mailed or returned in person.

“Yes,” she wrote, “drop boxes can be used for voters to return ballots but clerks should ensure they are secure, can bemonitored for security purposes, and should be regularly emptied.”

In a second memo to clerks on August 19, 2020, Wolfe and Assistant Administrator Richard Rydecki gave detailed instructions on the use of drop boxes for the Presidential Election that November.

“Voters may deposit their ballot in a drop box at any time after they receive it in the mail up to the time of the last ballot collection Election Day,” they wrote.  “Ballot drop boxes can be staffed or unstaffed, temporary or permanent.”

They further instructed that “ballot drop boxes should be placed in convenient, accessible locations, including places close to public transportation routes, near or on college campuses, and public buildings, such as libraries and community centers familiar to voters and easy to find.”

Some supporters of drop boxes have suggested that they constitute “alternate absentee ballot sites” that are allowed under Wis. Stat. § 6.855, but to be legal, such sites must be “located as near as practicable to the office of the municipal clerk or board of election commissioners.”  A drop box outside of a library or at the local college’s student union—potentially on the other side of town from the municipal clerk’s office—would most certainly not meet this statutory requirement.

Ballot drop boxes are therefore not allowable under Wis. Stat. § 6.855 or any other provision of Wisconsin law.  They are expressly forbidden by Wis. Stat. § 6.87, which allows absentee ballots only to “be mailed by the elector, or delivered in person, to the municipal clerk.”  And yet WEC’s Administrator was repeatedly instructing clerks to set them up.

In neither memo did Wolfe list a single statute either authorizing clerks to set up drop boxes or authorizing WEC to ignore the clear dictates of Wisconsin law, and this is quite telling.  It would strain credulity to suggest that the woman in charge of administering elections in the state would not know about Wis. Stat. § 6.87, so it would seem apparent that this omission was intentional.

If it was—if Wolfe knew that drop boxes were not lawful but allowed for their use anyway—she may have violated Wis. Stat. § 13.12 (2)(b), which provides that “no election official may inthe course of the person’s official duties or on account of the person’s official position, intentionally violate or intentionally cause any other person to violate” any provision of the statutes governing election law.

Knowingly causing thousands of people to violate Wis. Stat. § 6.87 by putting their ballots in drop boxes instead of legally returning them in person or by mail would be a serious offense; so serious that it is a Class I felony punishable by up to 3 ½ years in prison.

That is not to say that Wolfe necessarily committed a felony, but she did usurp the constitutional authority of the Legislature and essentially wrote her own statute allowing for the use of drop boxes in 2020.  Neither she nor the six appointed WEC commissioners have this authority, yet they have repeatedly and wantonly acted as if they did, and the courts must now clean up the mess they’ve made.

The Wisconsin Supreme Court is now being asked to rule definitively on whether ballot drop boxes are allowed under state law, and while they will still be in use for the Spring Primary later this month as the Court deliberates, they must be banned for the Spring Election.

The Court has no choice but to defer to the plain letter of the law, and Wisconsin’s law could not be plainer: Drop boxes are illegal.

@DanODonnellShow The WI Supreme Court has no choice but to defer to the plain letter of the law, and Wisconsin’s law could not be plainer: Drop boxes are illegal. Click To Tweet