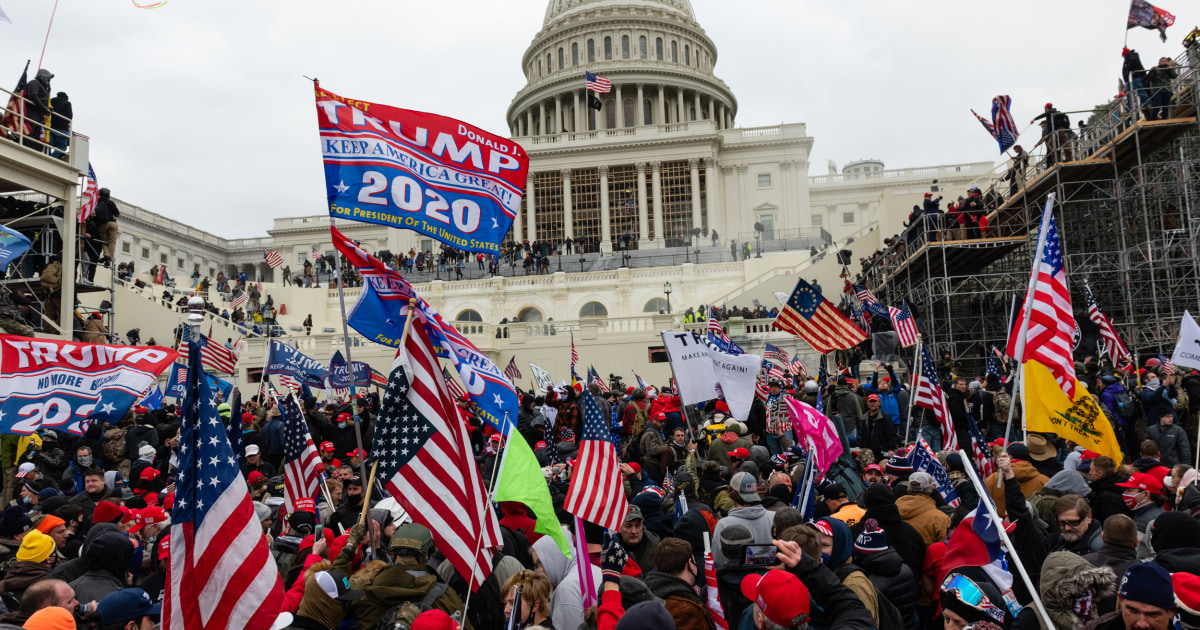 Dan O’Donnell examines the criminal charges filed as a result of January 6th to separate fact from Democrat hyperbole.

Anyone waiting for the first hysterical 9/11 comparison on the first anniversary of January 6th didn’t have to wait long.

“Certain dates echo throughout history, including dates that instantly remind all who have lived through them — where they were and what they were doing when our democracy came under assault,” Vice President Kamala Harris said early Thursday morning.  “Dates that occupy not only a place on our calendars, but a place in our collective memory. December 7th, 1941. September 11th, 2001. And January 6th, 2021.”

A few minutes later, President Biden compared it to the Civil War.

Of the more than 725 people arrested and charged in connection with the January 6th incident, none have been charged with “rebellion or insurrection” under 18 U.S. Code § 2383.

“Rioters rampaging, waving for the first time inside this Capitol, the confederate flag that symbolized the cause to destroy America, to rip us apart,” he said.  Even during the Civil War, that never, ever happened. But it happened here in 2021.”

This, Biden gravely intoned, represented a “dagger at the throat of America, at American democracy.”  It was nothing short of an “armed insurrection.”

Only it wasn’t.  Of the more than 725 people arrested and charged in connection with the January 6th incident, none have been charged with “rebellion or insurrection” under 18 U.S. Code § 2383.

The law, which carries a maximum sentence of ten years in federal prison, applies to “whoever incites, sets on foot, assists, or engages in any rebellion or insurrection against the authority of the United States or the laws thereof, or gives aid or comfort thereto.”

If, as Biden and Harris (and pretty much every Democrat in America) suggest, the January 6th defendants had stormed the Capitol with the intent of overturning the results of the 2020 presidential election, then why have none of them been charged with it?

And if, as they have been alleging for a year now, this insurrection was really aimed at toppling the incoming Biden government and reinstating Donald Trump as President, then why have none of the more than 725 defendants been charged with “seditious conspiracy” under 18 US Code § 2384?

Doesn’t that behavior sound exactly like what Biden, Harris, and the rest of the Democratic Party have claimed happened on January 6th?  Didn’t a group of conspirators—egged on and perhaps even directly guided by former President Trump—take the Capitol by force in an attempt at destroying the government (as well as democracy itself)?

And if Trump—or anyone else supposedly fomenting and guiding the “insurrection”—was indeed advocating for the overthrow of the Biden government, then why have they not been charged accordingly?  18 US Code § 2385 criminalizes “advocating the overthrow of government,” which it defines as knowingly or willfully advocat[ing], abet[ting], advis[ing], or teach[ing] the duty, necessity, desirability, or propriety of overthrowing or destroying the government of the United States.”

After 365 days of criminal investigations, there has not been enough evidence to bring such charges against any of the more than 725 people arrested in connection with what is now hyperbolically (and laughably) considered a 9/11-like attack on the Capitol.

Why have none of the more than 725 defendants been charged with “seditious conspiracy” under 18 US Code § 2384?

Were this an actual domestic terror attack, it would have been charged as such.  It was not.  Not one of the more than 725 January 6th defendants has been charged with a terror-related offense.  This will undoubtedly come as a shock to Biden, Harris, and any Democrat who believes their hysterical rhetoric.

Domestic terrorism is defined in federal law as “acts dangerous to human life that are a violation of the criminal laws of the United States or of any State” that “appear to be intended to intimidate or coerce a civilian population, to influence the policy of a government by intimidation or coercion, or to affect the conduct of a government by mass destruction, assassination, or kidnapping.”

If the January 6th “terrorists” really had brought gallows into the Capitol with the intent of hanging then-Vice President Mike Pence if Pence didn’t acquiesce to their demands to stop the electoral vote certification, then why have none of them faced a domestic terrorism sentencing enhancement?

Under the law, such an act “calculated to influence or affect the conduct of government by intimidation or coercion, or to retaliate against government conduct” is considered a “federal crime of terrorism” and can thus be used to enhance a federal sentence.

Wasn’t the whole point of the January 6th “insurrection” to affect the certification of the election through intimidation and coercion?  Why haven’t the charges or sentences reflected this?

The answer is as simple as it is predictable: The reality of January 6th is nowhere near Democrats’ rhetoric about it.  January 6 was a riot and a national embarrassment, but it was not an insurrection, an attempted coup, or the worst attack on America since 9/11 or Pearl Harbor.

If it was, the criminal charges would have reflected it.