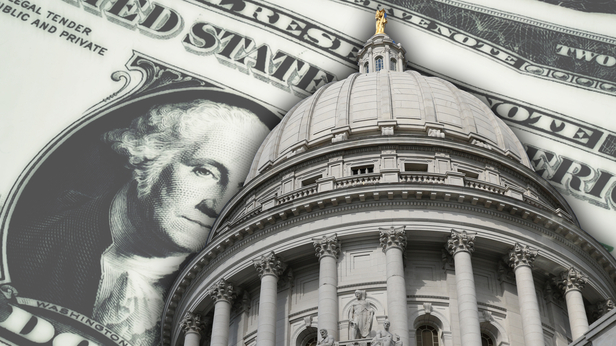 The Federal Government Has Sent An Astonishing $58.2 BILLION In Covid-19 Funding To Wisconsin

Tuesday, January 25th
By MacIver Staff
The non-partisan Legislative Fiscal Bureau released a memo Tuesday projecting that higher tax collections, from a stronger than expected economy plus the massive amount of federal COVID-19 funds spent here in Wisconsin, will result in a huge surplus for Wisconsin State Government. According to the memo, the closing net general fund balance at the end of this budget cycle (June 30, 2023) will be $3.81 billion. This $3.81 billion dollar projected balance is $2.88 billion higher than the estimate released back in October.
Tax collections are projected to be $2.51 billion higher than originally expected and state government spending will be $339 million less than anticipated.
The $2.51 billion dollars in higher than expected tax collections is a 6.7% increase compared to the October estimate. By June 2023, corporate tax collections are expected to have increased by $935 million, individual income tax collections by $823.7 million, and sales tax collections by $670.9 million.
Individual income tax collections totaled $9.28 billion in 2020-2021, a 6.2% increase over the prior year, and year-to-date collections through December of ’21 were 13.7% higher than a year ago.
Individual income tax collections are expected to decrease through June of ’23 thanks to the income tax cut proposed by Legislative Republicans and the lowering of the income tax withholding tables. Legislative Republicans also included the income tax withholding table changes in the ’21-’23 state budget but Gov. Evers vetoed that provision. Later, Gov. Evers’ Department of Revenue lowered the withholding tables administratively. The Legislative Republican tax cut, which Gov. Evers signed as part of the ’21-’23 budget, lowered the third income tax rate from 6.27% to 5.30%.
All told, the Fiscal Bureau is now estimating that income tax collections are expected to decline by $1.73 billion in 2021-2022 or 11.5%.
Great news for Wisconsin taxpayers, keeping more of our hard-earned money!
Senator Devin LeMahieu (@SenatorDevin), the Republican leader of the State Senate, said the surplus “is fantastic news for our state. Sound Republican budgeting continues to pay dividends. We will continue to prioritize returning this money to taxpayers to ensure the strength of family budgets in the future.”
Governor Evers was also quick to take credit despite generally proposing significant tax increases in both of his budgets that were scuttled by the Republican Legislature.

“We’ve made smart decisions with tax dollars, folks are back at work, and we’ve kept more money in your pockets. But I know many are facing rising costs at the checkout line, and businesses face challenges getting supplies. We can’t wait until the next budget—they need relief now.”

While some may read his last line as possible support for additional tax cuts, the relief he is alluding to is probably additional government spending or programs that will target a small silver of Wisconsinites, not another general tax cut that would benefit all taxpayers.

Assembly Speaker Robin Vos (R-Rochester) lauded “the sound fiscal decisions made by Republicans over the past decade” and pointed out that “while Democrats would love to go on a spending spree, now is not the time.” Vos finished by saying that “the citizens of Wisconsin should be confident that we’ll continue to be good stewards of their tax dollars.”

While Washington continues excessive spending of our citizens’ hard-earned tax dollars, we will continue to hold the line and maintain our responsible budgeting to protect the strong financial condition of our state.”

State Sen. Duey Stroebel (R – Cedarburg) put out a press release to give the revenue estimate context and warned about the end to the federal COVID-19 aid:

“Today’s updated revenue estimates are a cause for optimism, but we must put it into context. An unprecedented projected surplus for the state general fund follows the unprecedented windfall of one-time federal funds – roughly $58 billion – infused into our state economy over the past two years, with a large portion doled out by Governor Evers as he has seen fit. Let us not forget the path Evers would have followed had he been provided with the same level of unilateral control over the state budget. The tax-and-spend wish lists that have been presented to the Legislature over the past two budget cycles would have eviscerated virtually any possibility of a general fund surplus at the close of a biennium.”

“A historic surplus does not provide license to the Legislature to deviate from the prudent fiscal decision making that has put us in this strong position. Instead, LFB’s figures serve as all the more reason to prepare ourselves for the future when our state is not being endlessly showered with cash fresh off the federal government’s printing press.”

And despite these real and significant tax cuts, state government revenues are projected to INCREASE. Often, the opponents of tax cuts and those who want to dramatically grow the size of all facets of government will say that tax cuts will result in less government spending and the cutting of programs. Here again, we have direct proof that tax cuts generally lead to more tax revenue for government, not less.
Despite these two ongoing tax cuts, tax collections are expected to increase in the next biennium, which starts July 2022. Overall, tax collections are expected to increase by $574.4 million to $9.69 billion in total. This is a 17.9% increase compared to the previous estimate.
The $339 million in lower state spending is generally a result of increased spending at the federal level. The state’s medical assistance program lapsed $270 million because the federal government implemented an increased matching rate in response to COVID-19. The Wisconsin Healthcare Stability Plan, started under Gov. Walker to minimize health insurance premium increases within Obamacare, spent $34 million less because of the American Rescue Plan Act (ARPA). State government also saved $23.4 million on lower debt service.
According to the memo, the federal government has sent a mind-blowing $58.2 BILLION in COVID-19 aid to Wisconsin governments (state and local), individuals, businesses, and non-profits. This $58.2 billion in federal aid is more than the State’s annual all-funds budget.
Sales tax collections totaled $6.37 billion in 2020-2021, an increase of 9.2% over the previous year. Sales tax collections are projected to increase 8.7% in 2021-2022 and 4.4% in 2022-2023. These projected increases are roughly $670 million more than the October estimate. Sales tax collections through December of ’21 totaled $332 million or 13.2% higher than the prior year.
Corporate tax collections were $2.56 billion in 2020-2021, 59% higher than the previous year. The $2.56 billion collected is $230 million higher than the estimate from June 2021.
Corporate tax collections are expected to DECLINE by $140 million in 2021-2022 and then increase by $165 million in 2022-2023. According to the LFB forecast, corporate income will contract by 5.5% in 2021-2022 and grow by 6.8% in 2022-2023.
The LFB memo predicts that the GDP will grow by 4.1% in 2022 and 2.5% in 2023. This would be a slow down compared to 2021. According to LFB’s economy expert (IHS Markit), the GDP forecast is based on seven assumptions. 1) Omicron temporarily slows consumer spending. 2) No more federal stimulus bills will pass (BBB) 3) State and local governments will not experience a contraction (The memo notes that the second ARPA payment will be made in the second quarter of 2022). 4) Federal Reserve will scale back security purchases to zero by mid-March of 2022 and raise interest rates in May of 2022. 5) The US and China do not engage in a trade war. 6) Foreign GDP grows 3.8% in 2022 and foreign inflation stays between 2 and 3%. 7) The price of oil will drop from $79 a barrel to $67 per barrel by 2025.
Read the entire LFB memo here: https://docs.legis.wisconsin.gov/misc/lfb/misc/224_revenue_estimates_january_25_2022.pdf