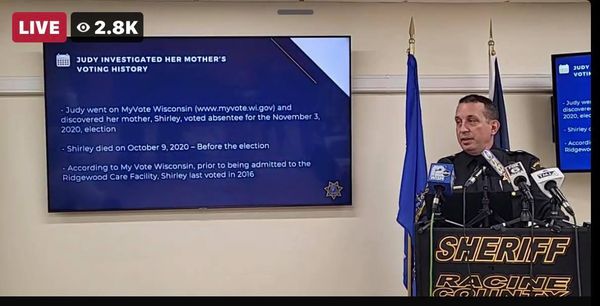 @DanODonnellShow Vote Fraud Investigation - Judy told investigators that it would have been impossible for her Mother to vote on her own or to even know who was on the ballot. https://bit.ly/3nEBANx #ElectionFraud #BallotIntegrity Click To Tweet

In a little more than an hour Thursday, the Racine County Sheriff’s Office didn’t just lay out incontrovertible proof of widespread fraud in the 2020 presidential election; it took a blowtorch to the notion that the Wisconsin Elections Commission (WEC) can ever again be trusted to fairly administer another election in this state.

In a direct and serious violation of state law, WEC commissioners and staff repeatedly told nursing home staff members that they could assist residents in voting and even fill out ballots on residents’ behalf.

In March 2020, after Governor Evers declared a public health emergency due to the emergence of COVID-19, WEC prohibited special voting deputies from entering nursing homes and residential care facilities across the state.

This presented a massive problem, as  Wisconsin Statute 6.875 explicitly provides that special voting deputies are the only people allowed to help nursing home residents vote.  Moreover, “no individual who is employed or retained, or within the two years preceding appointment has been employed or retained, at a qualified retirement home or residential care facility in the municipality, or any member of the individual’s immediate family…may be appointed to serve as a deputy.”

The law is crystal clear: Special voting deputies—trained officials picked from names submitted by the two major political parties—are authorized to help residents vote.  No one else, especially nursing home staffers, is allowed under state law to assist in any way with voting at residential care facilities.

On March 10, 2020, however, WEC petitioned Governor Tony Evers to temporarily suspend the special voting deputy requirement.  Evers’ office indicated that the governor was powerless to overturn state election law—even during a public health emergency—and that special voting deputies would have to be allowed into nursing homes to assist in voting.

In spite of this, WEC voted 6-0 to ignore the clear letter of the statutes and bar special voting deputies from nursing homes.

“What we are really saying here is…that, despite what the law says, the election commission is saying, in this instance, we need to have some flexibility to not follow the law,” Commissioner Dean Knudson said at the time.

Because WEC authorized nursing home staff to assist residents in voting and even to fill out ballots on their behalf if they were physically unable, WEC unlawfully caused those staffers to violate Wis. Stat. 6.875.  According to Wis. Stat. 12.13(2)(b)(7), this is a Class I felony punishable by a maximum sentence of 3.5 years in prison and $10,000 in fines.

All six WEC commissioners who voted to authorize such a plainly illegal voting arrangement last year, as well as the WEC staff members who recommended it, have violated state law and almost certainly have committed felonies.

This patently unlawful advice led to multiple instances of obvious voter fraud at the Ridgewood Care Center in Mount Pleasant.

In a typical year, the Mount Pleasant clerk told investigators, “usually approximately 10 people will vote and 0 to 3 people will make a fresh request for an absentee ballot from the Ridgewood Care Center.”  In 2020, a total of 42 Ridgewood residents voted, including 38 who made a new request for a ballot.

One of them, who contacted this columnist last November, told the Racine County Sheriff’s Office that her mother suffered from dementia and that “the only president she could remember was JFK.”  Still, according to MyVote Wisconsin records, she voted before passing away on October 9, 2020.

Her daughter Judy told investigators that it would have been impossible for her to vote on her own or, in truth, for her to even know who was on the ballot.  Seven other families of Ridgewood residents told the Racine County Sheriff’s Office the same thing.

One resident who voted last November “has been determined to be incompetent” and even “had her right to vote taken away” in court.  She is so mentally incapacitated that she is “not allowed to sign any legal documents” and “would not have known how to request an absentee ballot.”

Another “would not have known who the candidates were” and yet she voted for the first time since at least 2012 in the 2020 presidential election.

The Racine County Sheriff’s Office investigation determined that multiple absentee ballots sent to the Ridgewood Care Center were “pre-filled out by facility staff” and that the voting itself was conducted by staff members under the direction of the facility’s director of recreational therapy, who told investigators that “if a resident could only point to the ballot, her staff would fill in the appropriate dot.”

This columnist documented dozens of similar cases from across the state, all of which almost certainly resulted from WEC’s demonstrably illegal advice.  Wisconsin law prohibits nursing home staff members from serving as special voting deputies (and thus helping residents vote in any way) precisely because of how dependent residents are on staff members for their basic human necessities.

The amount of control that may be exerted by a staff member is immeasurable, and the amount of influence over a vote would therefore be unacceptable.  If a staff member said, for example, “vote for Joe Biden,” would a resident really be in any position to object?  Even worse, if a resident was not mentally competent enough to know he or she was even voting, how easy would it be for an unscrupulous staff member to vote on that resident’s behalf—especially when WEC authorizes such an arrangement?

The extent to which staff across the state (not just at Ridgewood) abused this power certainly warrants a far more extensive investigation, but the fact that they were allowed this power at all in direct contravention of state law needs no further inquiry.  All six WEC commissioners who voted to authorize such a plainly illegal voting arrangement last year, as well as the WEC staff members who recommended it, have violated state law and almost certainly have committed felonies.

Not only should each of them be made to resign, this level of gross misconduct in public office should result in criminal prosecution and the dissolution of WEC itself.  If the State of Wisconsin cannot trust its top electoral authority to follow state election law, then how can it expect either free or fair elections moving forward?