Democratic State Senator Tim Carpenter says “people will get hurt, [and] people will die” if critical race theory is barred from being taught in schools.

But as Dan O’Donnell writes, Democrats have been saying for months that critical race theory isn’t being taught in schools!

If there was any lingering doubt that some legislators don’t actually read bills before voting on them, this week should have erased it.

Amid shrieking histrionics from Democrats, the Wisconsin Assembly passed a hateful, borderline racist measure that…bans the teaching of racial or gender-based stereotyping.

Wait, what?  That’s the bill that State Senator Tim Carpenter (D-Milwaukee) said would literally hurt or even kill people if passed?

In a 60-38 party-line vote in the Assembly, Republicans advanced Assembly Bill 411, which provides that “a school board or the operator of a charter school…shall not allow a teacher to teach race or sex stereotyping.”

This was apparently so controversial that Carpenter felt the need to rise for a 13-minute speech on the floor of the Senate that promised bloodshed if such a monstrosity were to become law.

“I’m very concerned about the direction of this country,” he said, practically shaking with terror that schools would be prohibited from teaching that one race is superior to another.  “We’re going to look foolish, and people are going to get hurt, people will die because of this thought that for some reason using the words ‘critical race theory’ to make up something to say we can’t have that in our schools.”

Had Carpenter actually read A.B. 411, he would have discovered that it never once uses the words “critical race theory,” but no matter: It will still maim and kill untold thousands.

If one can get past Carpenter’s clownish hysteria (which is admittedly difficult), his speech is a marked departure from Democrats’ insistence that critical race theory is not being and has never been taught in K-12 schools.

“Teachers nationwide said K-12 schools are not requiring or pushing them to teach critical race theory, and most said they were opposed to adding the academic approach to their course instruction, according to a survey obtained by NBC News,” the network reported in early July, when the issue began to dominate contentious school board meetings across the country.

“Let’s be clear: critical race theory is not taught in elementary schools or high schools,” American Federation of Teachers president Randi Weingarten said during the union’s annual conference a week later.  “It’s a method of examination taught in law school and college that helps analyze whether systemic racism exists—and in particular whether it has an effect on law and public policy.”

Now, however, critical race theory is so essential that removing it from the classroom will cause widespread death and destruction.

“We’ve heard for weeks that critical race theory is not in the classroom and that it’s in college and law schools only,” said A.B. 411’s author, Rep. Chuck Wichgers (R-Muskego).  “But now they’re saying it has to stay in the classroom.”

Besides, Wichgers’ bill does nothing more than ensure that elementary, middle, and high school students are not taught that any races are superior or that because of their race individuals today are somehow responsible for the actions of people who died hundreds of years before they were born. 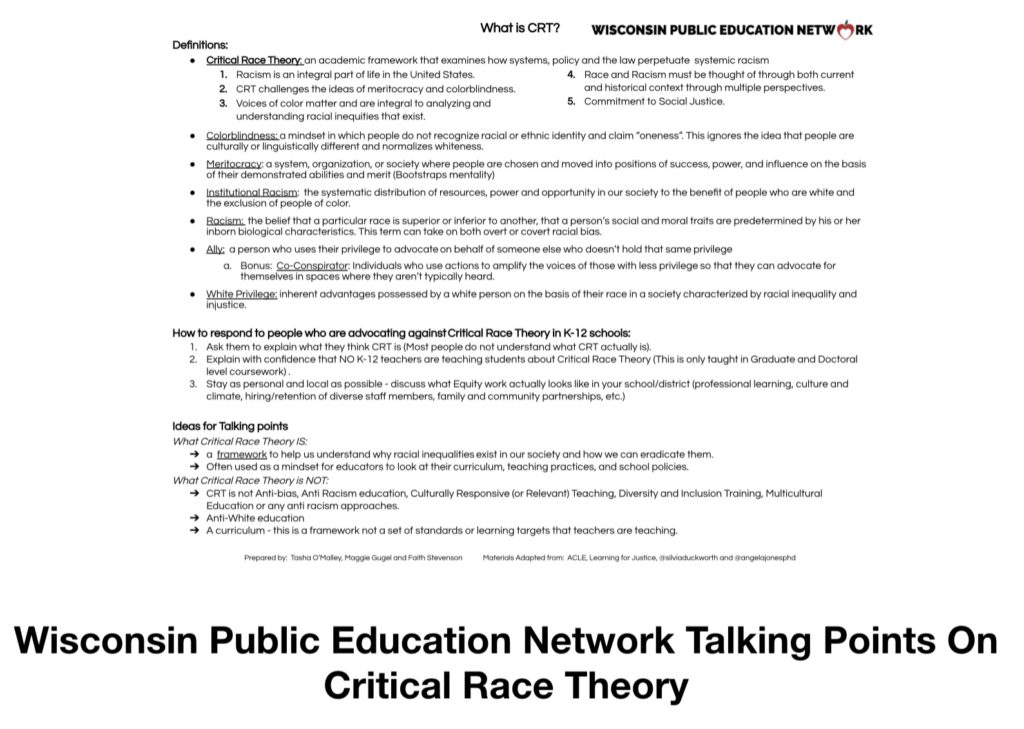 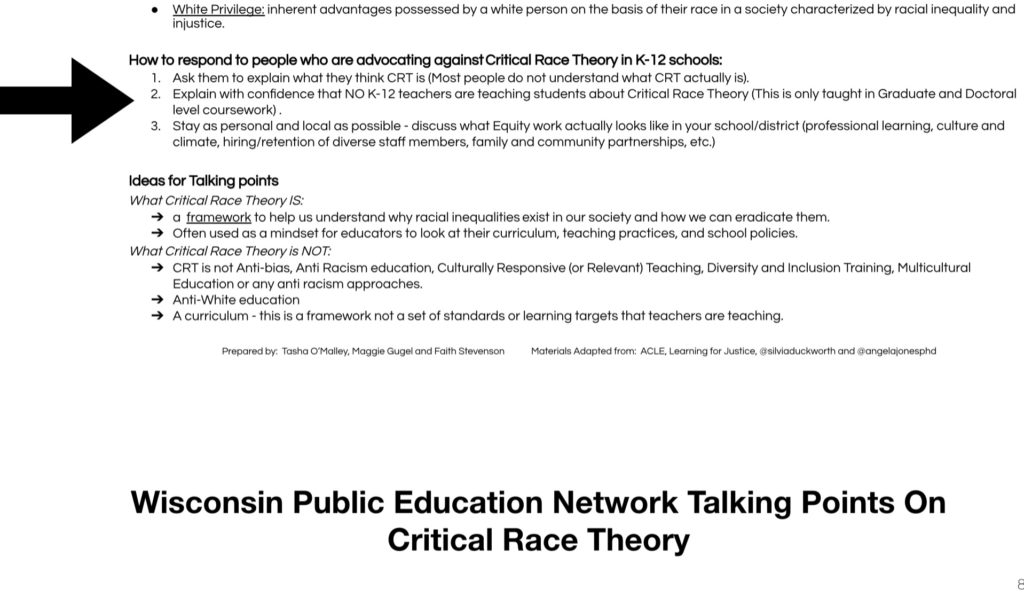 During a saner era, this would pass with unanimous consent, but alas ours is an age when such a bill might murder innocent schoolchildren if given the chance.

In reality, it is genius for the way it draws out Democrat craziness and, more significantly, because it forces the supporters of critical race theory to confront the fact that it really does stereotype people as either oppressors or oppressed and assign blame for historical wrongs to modern-day people based solely on the color of their skin.

Because A.B. 411 prohibits the teaching of such bigoted, ahistorical nonsense, it should pass the Senate overwhelmingly.

The ICS Equity Handbook: An Overview Of “Leading for Social Justice”