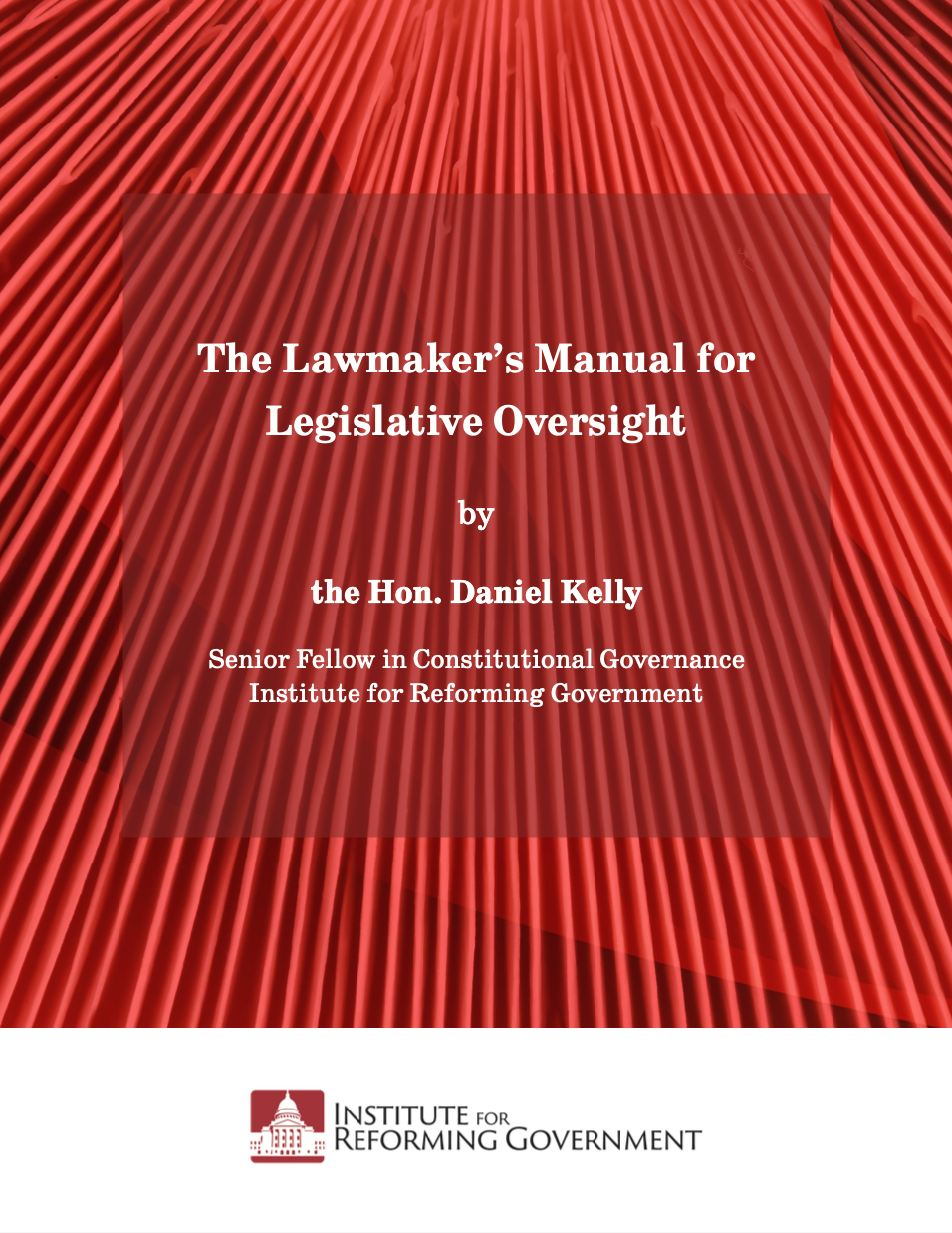 Perspective by Hon. Daniel Kelly, Senior Fellow in Constitutional Governance at the Institute for Reforming Government

I’d like to commend the virtue of curiosity to our legislature.  The ability to see what is, but wonder what could be, drives every meaningful advance, whether in science, the arts, philosophy, or any other field.  Before the Wright brothers built their remarkable machine, is there any doubt they were consumed with wonder about the intricacies of flight?  And surely Dr. King’s declaration that “the arc of the moral universe is long, but it bends toward justice” started with curiosity about the nature of humanity as it gathers together in society.

There are plenty of topics here in Wisconsin about which the legislature could be usefully curious.  For instance, when the pandemic-fueled business closures struck, the state’s unemployment insurance system buckled.  Months-long delays in processing claims, coupled with the failure to answer an astonishing 99.5% of telephone calls, caused many to lose confidence in the Department of Workforce Development.  On the education front, Wisconsin’s school system has apparently lost track of 23,000 students this past academic year, and it appears no one knows whether they were receiving the education they needed.  Within our state government structure itself we have seen, over the past many months, an unusual spike in disputes between the executive and legislative branches regarding their respective authority.  We know these things are . . . but we should be wondering why they are.  And that should make us curious about whether they can or should be different.

Legislative curiosity about these matters (and so many others) is more than just commendable.  Because of the central role the legislature plays in our form of government, it is indispensable.  We commonly refer to the three branches as “co-equal,” which is true in the sense that they enjoy equal dignity.  That is to say, one branch may not invade the province assigned by the constitution to another.  But in the business of creating and overseeing the state’s public policy, co-equality does not describe the relationship.  The constitution vests the law-making power in the legislature, and the legislature alone.  And that unquestionably makes it the first amongst equals with respect to the creation of our state’s public policy.

The legislature, however, cannot adequately perform its law-making function without a full and deep understanding of the matters it addresses.  Curiosity is the driving force behind the quest for that information.  Discovering why the unemployment insurance system failed, or what the students were doing, or the genesis of the border disputes between the governmental branches, is not about finger-pointing or political score-settling.  It is, instead, an essential prerequisite to crafting wise public policy.  So when the framers gave the law-making function to the legislature, it simultaneously gave it a voracious appetite for knowledge.

“Oversight” is the legislature’s institutional expression of this curiosity.  It is the process by which legislators learn and stay connected to the real world through investigations and hearings.  In anticipation of potential legislation, it allows them to explore whether there is a right in need of protection, a behavior in need of banning, a sum of money in need of appropriating, a program in need of creation.  It asks whether existing laws are being implemented as intended, because even the most carefully written statutes might not successfully transition from enactment to operation.  Recognizing that societies are fluid and laws are not, it inquires into whether current laws need adjustments to maintain their effectiveness.  It challenges the axiom that “[n]othing is so permanent as a temporary government program” by keeping track of programs that have accomplished their purpose and are ready for retirement.  It hunts down waste, fraud, and abuse.  It patrols the borders of the legislature’s law-making authority to ensure it doesn’t migrate to other branches of government.  And so on, for as far and wide as the legislature may legitimately act.

This curiosity is both essential and healthy because the legislature’s responsibility goes beyond the discrete act of making the law.  Its duty commences prior to the legislative act, and it continues long afterwards.  It cannot simply cast its bread on the water and walk away because although the law it makes belongs to the public as well as the other branches of government once enacted, the legislature remains its custodian.  And a responsible custodian will continually make sure its work is effective, respected, up-to-date, and retired when no longer needed.

That is why, today, the Institute for Reforming Government is releasing the Lawmaker’s Manual for Legislative Oversight.  IRG believes the legislature’s vigorous exercise of its oversight authority will lead to public policy that promotes human flourishing, respects constitutional limits, quickly responds to constituents’ concerns, and enhances our ability to enjoy our freedoms in a mutually-respectful society.  The Manual explains the importance of the legislature’s institutional curiosity as well as its historical and legal origins.  And, most importantly, it provides practical advice and guidance on how to channel that curiosity into oversight investigations and hearings capable of keeping our public policy focused, effective, and within proper boundaries.

Wisconsin is a great state in which to live and do business, but it has no lack of legislatively-addressable curiosities.  They might take the form of unnecessary burdens on individuals or businesses, improperly executed laws, stale regulations, unintended consequences that drown out a policy’s stated purpose, or any number of other inefficiencies or legislative misses.  They await the legislature’s institutional curiosity.  The Executive Oversight Manual will be there to help.  I wish the legislature good luck and good hunting!