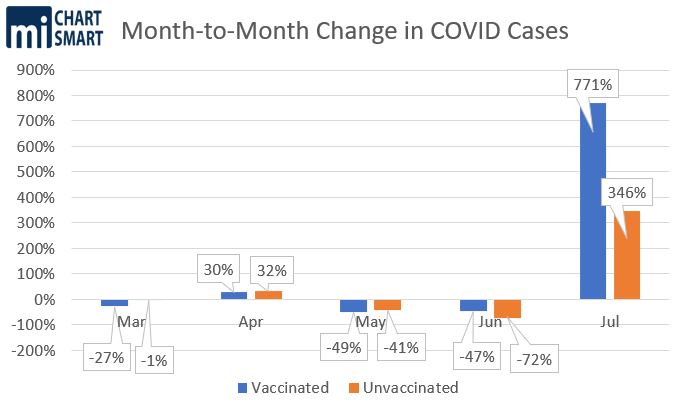 DHS Says the Delta Variant is to Blame

The chance of getting COVID-19 is higher for unvaccinated individuals in Wisconsin, but that gap is closing fast, according to data released by the Department of Health Services on Thursday.

DHS released comparisons between vaccinated and unvaccinated individuals for cases, hospitalizations, and deaths covering February through July. The data did not include exact numbers of individuals, just the rate per 100,000 people. In every category in every month, the rates were higher for unvaccinated individuals. The new data suggests this might not be true for much longer.

However, a month-by-month breakdown reveals that percentage is shrinking. In May it was 95%. In June it was 88%. And in July it was 77%.

Why are #COVID cases doubling among the vaccinated but not the unvaccinated? @DHSWI says it’s because of the #DeltaVariant. #WIright @sbauerAP pic.twitter.com/IkuXqBJhuW

#COVID death rates are dropping among both the vaccinated and unvaccinated in Wisconsin. #WIright pic.twitter.com/aGBurJQWWE

The percentage of people vaccinated grew significantly during this timeframe. In February only 1.9% of Wisconsin residents were fully vaccinated. In July, that rate had grown to 47.4%. In May, when trends for cases and hospitalizations started to reverse, the vaccination rate was 35.4%.

Although the trends found in DHS’ new data might indicate a drop in vaccine efficacy, DHS continues to push for more vaccinations.

In a press release Thursday, DHS Secretary-designee Karen Timberlake stated, “The COVID-19 vaccines are still doing their job by stopping the spread of many new infections, and by preventing severe illness, hospitalization, and death.”