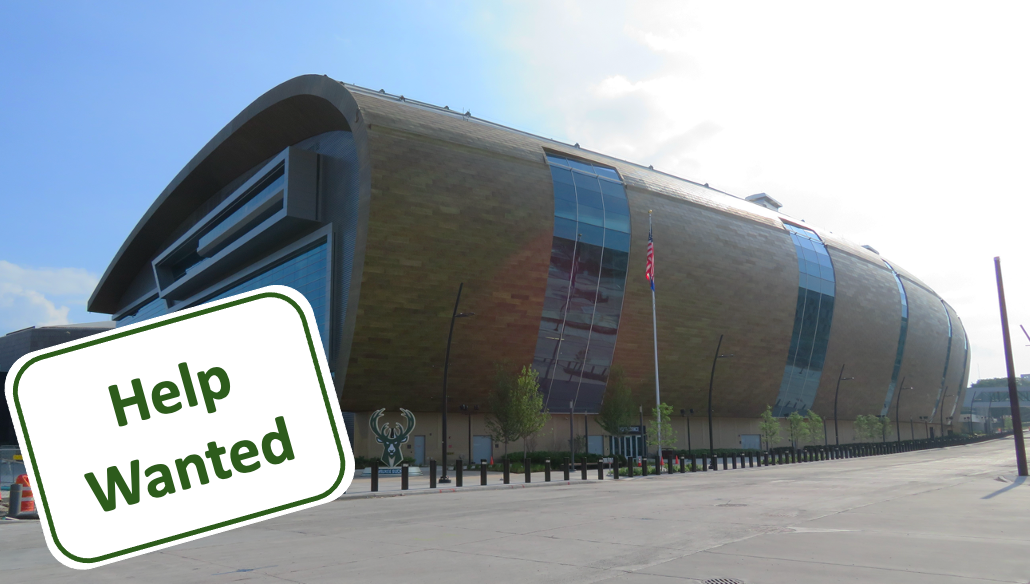 Image by Spaluch1, modified from original

As the Milwaukee Bucks prepare for Game 4 of the NBA Finals, Dan O’Donnell reports that they are struggling with a government-created worker shortage that has devastated Wisconsin for months now

Fiserv Forum will be electric tonight, with a sold-out crowd in the arena and tens of thousands more gathered outside in the Deer District for Game 4 of the NBA Finals.  But while the Milwaukee Bucks have had no trouble getting fans to see their games, it has been nearly impossible to find anyone to work them.

Bucks President Peter Feigin told a Milwaukee Business Journal forum Tuesday that the team has been forced to bus in hundreds of workers from the United Center in Chicago and recruit other potential employees from Minnesota and Iowa.

“There is a massive labor shortage,” Feigin said, adding that the team has had to offer “recruiting incentives that it had never implemented before.”

The irony here is both hilarious and maddening.  Bucks co-owner Marc Lasry is one of the nation’s largest Democratic Party campaign bundlers and his son Alex, the team’s senior vice president, is running for the United States Senate as a Democrat next year.  Both are major supporters of the very politicians and that have led directly to their inability to find enough workers for tonight’s game.

The elder Lasry likely never imagined when he was raising millions of dollars for Joe Biden’s presidential campaign that just six months into Biden’s presidency he would personally bear the brunt of Biden’s devastating economic mismanagement, but that’s the way the ball bounces.

Biden’s extension of $300 per week in unemployment enhancement through the end of summer has decimated businesses from professional sports franchises down to the lunch trucks outside their arenas by making it all but impossible to find employees.

A recent survey from job listing service Indeed found that just 10 percent of the more than 10 million unemployed Americans are “actively” and “urgently” looking for work.  Why would they?  There is no urgency to be active when the government is paying an average of more than $600 per week (plus a $1,400 stimulus check) to take the summer off.

As a result, summer itself has been ravaged.

Just 10 percent of the more than 10 million unemployed Americans are “actively” and “urgently” looking for work.  Why would they?  There is no urgency to be active when the government is paying an average of more than $600 per week (plus a $1,400 stimulus check) to take the summer off.

The City of Milwaukee was forced to cancel its Independence Day fireworks because, as Parks Director Guy Smith admitted, “it comes down to simply lacking the resources and staffing needed to prepare and clean up from such a large-scale event.”

The Wisconsin Dells, the state’s most popular summer vacation spot, has faced a massive worker shortage that has impacted hotels, restaurants, and water parks alike.  Noah’s Ark, which bills itself as America’s largest water park, will be closed all Wednesdays and most Tuesdays for the rest of the season because of a lack of staff.

“We don’t have the young people that we used to have and then we put on top of that, the enhanced unemployment,” Dells Attraction Association President Tom Diehl told the Associated Press in late May.

The same lifeguard shortage that has hampered the Dells forced nearly every Milwaukee County pool to close for the entire summer, while other popular vacation hotspots like Door County and Lake Geneva have struggled mightily with a flood of tourists but a dearth of workers.

The Wisconsin State Fair and Summerfest are so desperate to find employees that they held a joint job fair over the weekend and are offering more perks than ever before in a bid to lure Wisconsinites back to work.

Thus far nothing has been able to, and the Bucks are just the latest business to suffer because of it.  Were the Lasrys able to put the team before politics, they would pressure Governor Evers to end the $300 unemployment enhancer, as 22 other states already have.

The Wall Street Journal, citing analysis by Jeffries LLC, reports that states which announced an end to enhanced “benefits in June saw a 13.8 percent drop in residents receiving benefits from mid-May through June 12.” States that announced an end to the federal enhancer “in July saw a 10 percent decline in residents receiving state benefits over the same period, while states ending federal unemployment in September recorded a 5.7 percent decline.”

This tends to prove that the federal benefits are the primary driver of the worker shortage, as states which cut off the “free” money are starting to see their residents return to work.

Marc Lasry, as co-owner of the Bucks and a major Democrat donor, and Alex Lasry, as uhhhhh his son, have the financial and political sway to convince Governor Evers to get Wisconsin back to work by ending the federal unemployment enhancement.  The team clearly needs it, but the Democratic Party could not afford such a high-profile rebuke.

This is a shame, because Wisconsin cannot afford more economic policy airballs from Biden and Evers.