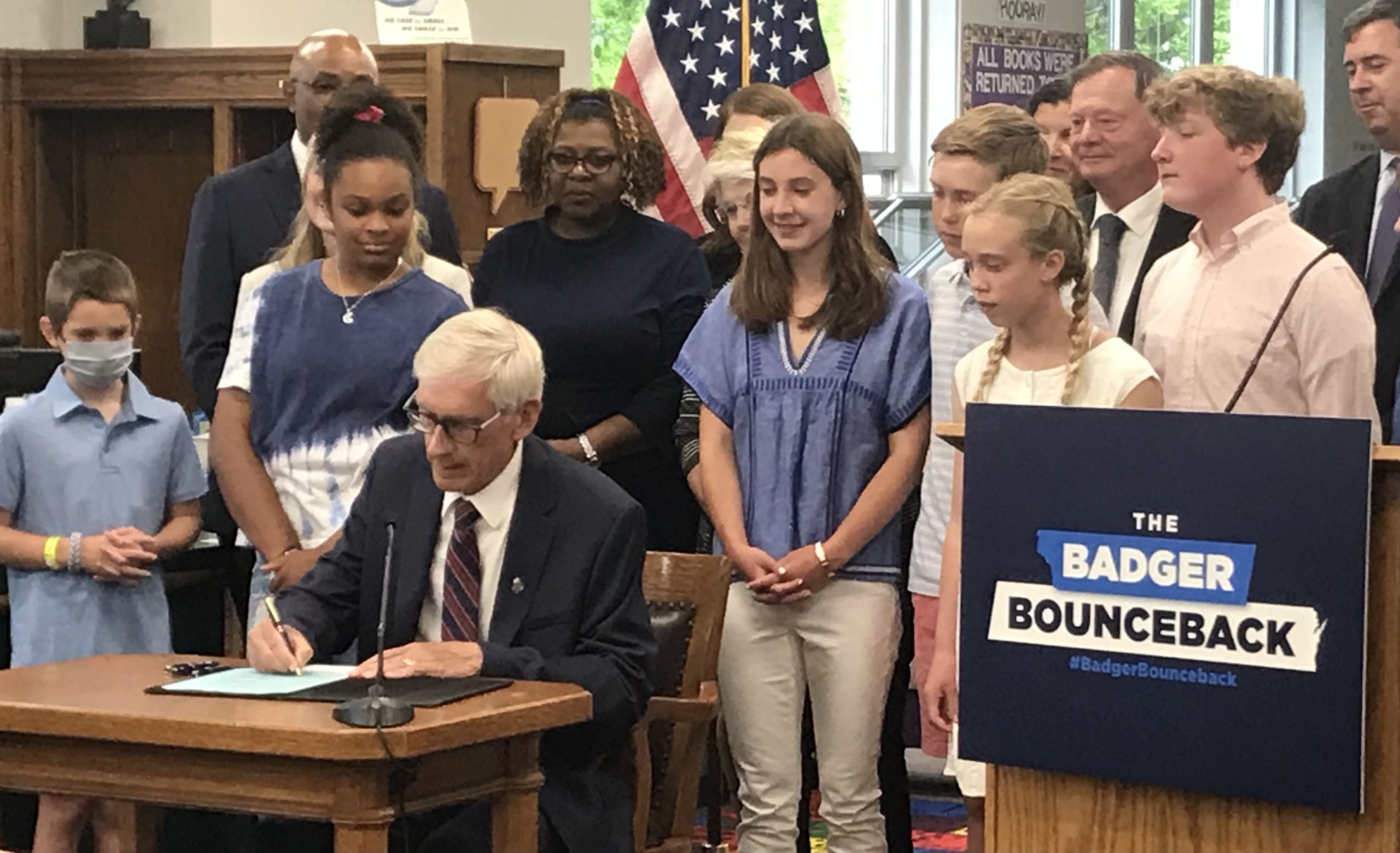 Dan O’Donnell notes that Governor Evers signing the Republican budget means only one thing: He cares far more about his own re-election effort than any of the issues he has spent the past five months yelling about

“Paltry.”  “Inadequate.”  “An insult to the kids of our state.”  Just a month ago, Wisconsin Governor Tony Evers had harsh words for the Republican-controlled State Legislature’s biennial budget.

Now he’s trying to take credit for it.

“This morning, I’m providing more than $2 billion in tax relief and cutting taxes for middle-class families at a time when our economy and families need it most,” Evers said during a press conference Thursday morning.

The idea that Evers wanted to cut taxes at all is laughable on its face, as is the way the Governor abandoned the schoolchildren he claimed for months would be badly harmed by the Republican budget he just signed.

“What they invested was paltry and an insult to the kids of our state,” he said in early June.  “My budget was a reasonable approach.”

The Republicans’ “paltry” increase in K-12 education aid was $128 million in state funding accompanied by a staggering $2.6 billion in federal COVID-19 relief that brought total spending to a record $17.9 billion over the next two years.

Evers wanted a $1.6 billion increase in state funding and said Republicans’ $128 million was “inadequate.”  The budget he signed included a $100 million increase, funded entirely by federal money.  Almost one month to the day after Evers threatened to veto the budget in its entirety (something that hasn’t happened since 1931) over the supposed lack of education spending, Evers signed a budget that spends the exact same amount of state dollars on K-12 education that Republicans did.

To put that staggering about-face into proper perspective, the budget Evers signed spends less than a tenth of the state funds he originally allocated for school aid back in February.  It only increases total education funding by half a percent.  Is this also “an insult to the kids of our state?”

The reality is that Evers has no real legislative priorities; he has only a political agenda to satisfy.  And right now, the most important item in that agenda is his re-election bid.

Evers similarly spent months chastising Republicans for refusing to expand BadgerCare Plus, only to sign their budget that does not include a BadgerCare Plus expansion.  The Legislature’s failure to do so, Evers said repeatedly, would cost Wisconsin $1 billion in federal money that was tied to a Medicaid expansion.  Evers even called the Legislature into special session to pass a BadgerCare Plus expansion, but after the Senate and Assembly both gaveled in and out in a matter of seconds, Evers complained in the press for a couple of days and then abandoned his supposed priority altogether.

The reality is that Evers has no real legislative priorities; he has only a political agenda to satisfy.  And right now, the most important item in that agenda is his re-election bid.  Evers undoubtedly understands which way the political winds are blowing.  A new president’s first midterm election is almost always a disaster for his party, and only once in Wisconsin’s history has a gubernatorial candidate won an election when his party held the White House.

This on top of Evers’ disastrous handling of the COVID-19 lockdown and Kenosha rioting last year makes him one of the most vulnerable incumbents in the nation, and he signed the Republican budget (with minimal line-item vetoes) because he knew he had to.

The electorate will be more conservative next November than it was in 2018, when Evers was the beneficiary of a Republican governor trying to hold his seat during the first midterm of a new Republican president.  Evers couldn’t afford to veto a budget with the largest tax cut in Wisconsin history, so instead he is simply taking credit for it and hoping his media allies will let him get away with it.

This isn’t a particularly bad gambit, but it does reveal a stark truth about not just Governor Evers, but all Wisconsin Democrats: They have no priorities, no principles, no unifying causes that they will not sacrifice in the name of holding on to their own power.

Notice that not one Legislative Democrat put out a press release blasting Evers for caving to Republicans on taxes.  Notice that not one liberal special interest group or teacher’s union called a press conference to decry the lack of education funding in Evers’ budget.  They all shrieked about these issues for months but are silent now that Evers seems to have betrayed them.

He hasn’t, because they all know—as he does—that winning the next election matters far more than the education money or BadgerCare Plus expansion that they will only yell about.  If those priorities must be abandoned so Democrats can stay in power, then so be it.  There is no issue too important, no cause too noble to be sacrificed at the altar of politics.

Legislative Republicans will take the win on this budget (and it is a significant win for both the GOP and the people of Wisconsin), but they must also understand that Evers intends to run as a tax cutter who held the line on government spending.  In other words, he’s pretending to be a Republican in what figures to be a big Republican year.

Real Republicans can’t allow him to get away with lying to voters like he spent the past five months lying to his supporters about all of his supposed priorities and policy goals.