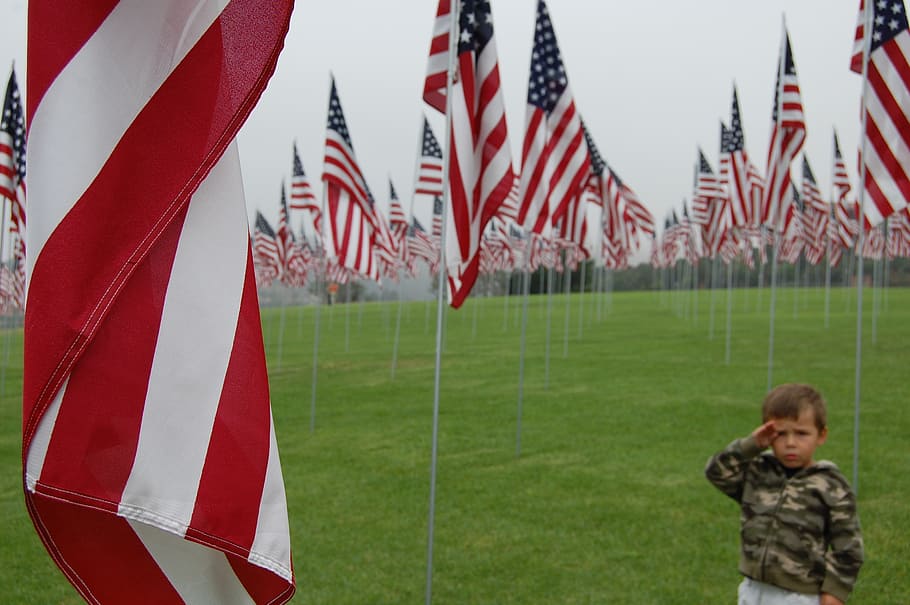 Systemic racism isn’t the hallmark of America; systemic altruism is. We are revolutionary in our kindness, compassion, & commitment to defending all people, regardless of their race, their creed, or the color of their skin. Click To Tweet We are all one people with one common purpose & while we are & never have been perfect, we are always at the ready to right our society’s wrongs. This in itself proves the rightness of our country, the goodness of our society. Click To Tweet

Four score and seven years ago…

Dawn breaks on a warm July morning.  A young soldier squints in the sunlight as he sees a cloud of dust rising from the road ahead.  The Confederates are marching toward him.

…Our fathers brought forth on this continent…

Beads of sweat drip from his brow as grabs his corporal’s rifle and steadies it against a fence.

…A new nation, conceived in liberty…

He steels his nerves, takes a breath, and squeezes the trigger. The Battle of Gettysburg has begun.

…And dedicated to the proposition that all men are created equal.

150 years later, we are engaged in a new civil war, testing whether that nation can long endure an assault on the notion that it was ever so conceived or so dedicated. We are met on a great battlefield of self-loathing with a veritable army that casts America not as an enduring beacon of liberty, but rather a permanent harbor for oppression.

Our nation, they claim, was conceived in slavery in 1619 and has been ever since dedicated to the proposition that inequality must be preserved at all costs.  Their unshakeable belief is that America’s most important institutions—self-governance, free markets, meritocracy—and even America itself exist solely to perpetuate the supremacy of a favored race.

Their myopic theory casts race (and racism) as critical to an understanding of what America really is, but their hatred for what they suppose America to be blinds them to the truth about it: There has never been a freer, nobler, greater place on Earth.

And there has never been a people more dedicated to ensuring it; perfectly willing to lay down our lives so that others might share in America’s promise.

We are met on a great battle-field of that war. We have come to dedicate a portion of that field, as a final resting place for those who here gave their lives that that nation might live.

As soon as the young soldier saw what he thought was a Confederate officer on a white horse, he fired his shot—the first of more than one million that were fired over three hellish days.

The Union Army was desperate to stop Robert E. Lee’s advance northward.  Just months after President Lincoln’s Emancipation Proclamation freed all slaves in the Confederacy, it seemed that the dream of freedom in there was all but dead.  If Lee advanced any further than Pennsylvania, he might force a Union surrender and, as Lincoln had predicted years earlier, the house divided against itself over the question of slavery would not stand.

Gettysburg would be the Union Army’s last stand. The fighting raged for hours as the air grew thick with cannon and rifle smoke and the anguished cries of the dying echoed through the battlefield. The hours became days. When the smoke cleared and the cries faded after the three-day battle, a third of the soldiers who fought in it were dead, injured, captured, or missing.

It was the deadliest battle America had ever fought—made even more heartbreaking because it fought against itself—but freedom always has a heavy cost.  The Confederate Army was turned back and retreated south with the Union in hot pursuit.  Gettysburg was the turning point in America’s Civil War, and the Confederacy surrendered less than two years later.

The world may little note nor long remember the young soldier who fired the first shot, Marcellus Jones, but he was the perfect man—the perfect American—to begin his nation’s final march toward abolition.

Why? Because he was an ordinary man who dedicated his life to the cause of liberty.  He wasn’t of noble birth.  He didn’t even have much education, but he was a hard worker and as a boy helped his father build wagons.  He discovered a talent for building things and made his way to Weyauwega, Wisconsin to start a door-making business.

Marcellus might not have had much formal schooling, but he was a superb businessman and his company flourished.  But in 1858, his wife died in childbirth and his factory burned to the ground.  He was devastated, but not defeated.  He moved to Illinois and started a contracting and carpentry business.

When southern states began seceding from the Union in 1860, though, Marcellus knew that war was inevitable.  He joined the 8th Regiment Illinois Volunteer Cavalry, which was recruited at Lincoln’s personal request.

Marcellus knew the stakes, he knew what he was giving up, but he also knew that America and its promise of freedom for millions of slaves was worth fighting and dying for.

It is for us the living, rather, to be dedicated here to the unfinished work which they who fought here have thus far so nobly advanced.

There have been throughout American history millions of Marcellus Jones’—ordinary men and women with an extraordinary willingness to bleed for the cause of freedom.  It is a hallmark of a nation so dedicated to its founding ideals that it breeds generation after generation whose solemn duty is to uphold them no matter the cost.

We are all one people with one common purpose, and while we are and never have been perfect (nor claimed to be), we are always at the ready to right our society’s wrongs.  This in itself proves the rightness, the goodness of our society.  We can recognize its failings and fight to fix them without succumbing to the cynical belief that America is an oppressive, racist nation.

Throughout our history, it was the Marcellus Jones’ among us who have reaped the benefits of America’s meritocracy and free markets to create for themselves a better life than they might have dreamed, but when the nation calls them to lay that life aside to preserve freedom and self-governance, they willingly and lovingly do so.

Systemic racism isn’t the hallmark of America; systemic altruism is.  We are revolutionary in our kindness, our compassion, and our commitment to defending and protecting all people, regardless of their race, their creed, or the color of their skin.

We are all one people with one common purpose, and while we are and never have been perfect (nor claimed to be), we are always at the ready to right our society’s wrongs.  This in itself proves the rightness, the goodness of our society.  We can recognize its failings and fight to fix them without succumbing to the cynical belief that America is an oppressive, racist nation.

Viewing its past through the prism of modern judgment is a fool’s errand, as our nation, like all nations, is pulled by the tide of history.  The difference is that America and its people have always been on the crest of the waves of societal progress.

Throughout our history we have fought for it, we have bled for it, and we have died for it, and today we here highly resolve that these dead shall not have died in vain — that this nation, under God, shall have a new understanding of its freedom — and a renewed love for and belief in America by her people shall not perish from the earth.