A lot of action went on at the Wisconsin State Capitol after the long holiday weekend. In case you missed it, below are some of the new developments and legislation that were taken up in Madison last week.

.@StateSenLaTonya says if Wisconsin gets rid of the $300 a week unemployment kicker, people still won’t get a job and it will only result in less spending in the local economy. #wiright #wibudget pic.twitter.com/SipO9BbrRZ

Republicans passed a motion on DWD that, among other things, would create a study on converting Wisconsin’s unemployment insurance (UI) system to a “sliding scale” system. The system would automatically adjust the number of weeks a claimant is eligible for UI benefits based on the state’s unemployment rate. The study would also look into other ways that the UI system can deliver benefits while also incentivizing work.

JFC members also debated enhanced federal unemployment benefits due to COVID-19. Senator LaTonya Johnson (D-Milwaukee) claimed that removing these benefits won’t make people go back to work, but Republican legislators believe these enhanced benefits have been contributing to the current labor crisis in Wisconsin. This week, the Assembly is set to vote on a bill to cancel enhanced federal COVID-19 unemployment benefits.

During the DNR vote, Democrat JFC members demanded more state money to replace lead pipes throughout the state, particularly in Milwaukee County. However, as Representative Tony Kurtz and other Republicans pointed out, ARPA funding–federal funds passed by President Joe Biden to cover COVID-19 costs–can pay for lead lateral replacement. Water infrastructure is one of the four accepted outlets that ARPA money can be used for.

Wisconsin governments, schools, businesses, and individuals have already received roughly $42 billion in federal COVID-19 aid since the beginning of the pandemic, yet Democrats on the Committee continue to push for increased state spending on all kinds of pet projects. Sen. Johnson argued that Republicans were passing the buck on lead lateral replacement, yet she failed to mention that City of Milwaukee officials ignored the problem for years, and could fix the problem now with their own ARPA distribution of nearly $400 million.

The Republicans turned down the Democrats’ lead lateral motion.

JFC will meet again on Tuesday to deliberate on budget motions related to the Department of Transportation, the Building Commission and Building Program, Department of Military Affairs, Division of Gaming and distributions of Volkswagen Settlement moneys.

One bill author, Representative Chuck Wichgers (R-Muskego), said “We are introducing this legislation at the request of hundreds of parents who have talked to us in our districts about the growing concern of the materials being taught to their children in their primary and secondary schools. It has come to our attention that a growing number of school districts are teaching material that attempts to redress the injustice of racism and sexism by employing racism and sexism, as well as promoting psychological distress in students based on these immutable characteristics.”

Rep. Wichger’s draft bill would require DPI to withhold 10% of state funding to any K-12 school that teaches Critical Race Theory in the classroom. If DPI chooses not to penalize the school district, parents can sue the district for an unspecified sum.

Present at the press conference was Monica Wichgers, a mother of students attending the Madison Metropolitan School District and relative of Rep. Wichgers. She spoke about how teachers in schools are promoting division. “Civil rights helped us advance, and now my children are being made to think of themselves as perpetual victims. To think of the white race as perpetual oppressors. This isn’t right.”

Representative Rick Gundrum (R-Slinger) spoke in favor of the bills, saying our schools should be focused on teaching students the basics and teaching them to be proficient. He said that “We should not be teaching them divisive content.”

MacIver’s original series, Questionable Curriculum: Critical Race Theory in Wisconsin K-12 Education, has highlighted the use of Critical Race Theory in school districts across the state. As MacIver has previously reported, proficiency scores in the state remain very low. In the most recent data available, only 43% of Wisconsin students are proficient in math and 41% are proficient in English Language Arts.

Finally, the Assembly Committee On Constitution And Ethics held a hearing last Wednesday for five bills that address the looming threat of mandatory COVID-19 vaccination and testing at various businesses and institutions.

One bill, AB 299, prohibits Wisconsin state and local governments, and businesses from requiring proof of COVID-19 vaccination as a condition for receiving services, gaining building access, or participating in any activities put on by the entity.

Lastly, AB 347 would prohibit the UW system and Wisconsin technical colleges from requiring students to be tested or vaccinated for COVID-19 as a condition of attending school.

MacIver will continue to publish updates on these bills as we learn more. 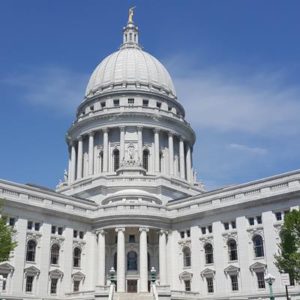