An updated revenue estimate released today shows that the State of Wisconsin is now expected to finish the current fiscal year (FY) with a $2.6 billion surplus and an even bigger $5.87 billion surplus by the end of the 2021-2023 budget, thanks in part to an “unprecedented” $4.4 billion more in tax collections, which is an 8.1% increase over a previous estimate. This incredible fiscal news is “based upon the strength of collections and the vastly improved economic forecasts for the remainder of this year and the next two years,” according to the nonpartisan Legislative Fiscal Bureau (LFB). 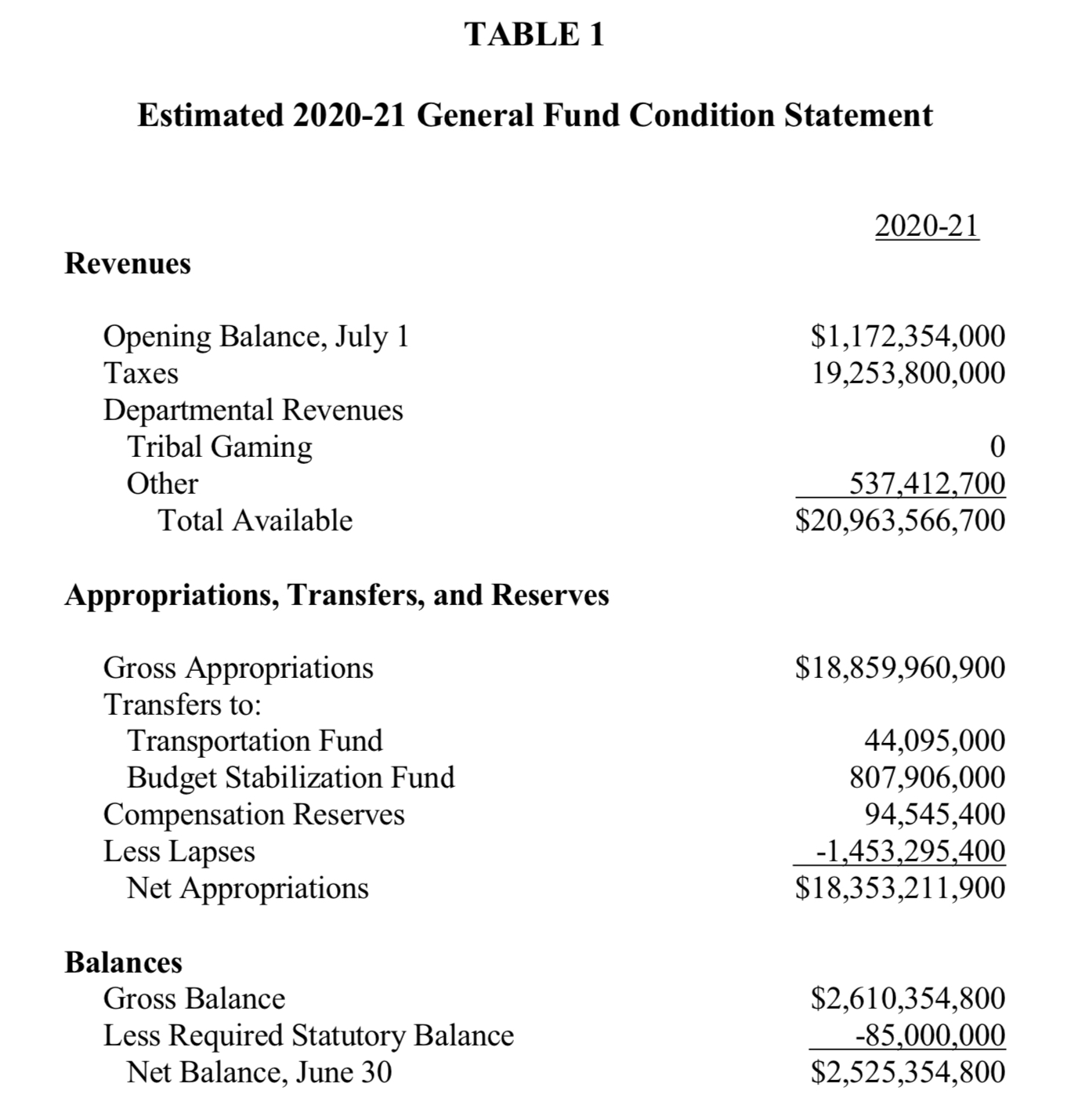 Of the $2.6 billion surplus at the end of FY21, $1.45 billion of the $2.6 billion is from higher than expected tax collections. This means that $808 million will be automatically transferred to the state Budget Stabilization Fund, better known as the Rainy Day Fund, at the end of June. This will bring the Rainy Day Fund’s balance to $1.57 billion.

With the higher than anticipated tax collections, LFB now estimates that the 2021-2023 state budget will end with a $5.87 billion positive general fund balance. The budget was originally projected to end with a $2.08 billion balance. 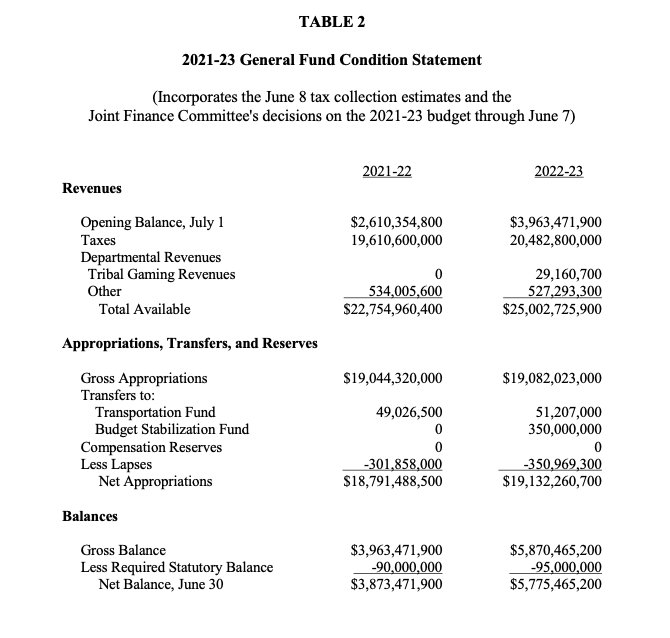 These “unprecedented” tax collection numbers appear to be caused by a combination of Wisconsin’s post-pandemic recovery from the government shutdown of our economy and the massive influx of federal COVID-19 stimulus money, specifically from the newly enacted American Rescue Plan Act (ARPA).

Following LFB’s release of the fiscal reestimate, Governor Tony Evers and Legislative Republicans announced their plans for the surplus.

“With so much money already flowing into Wisconsin from the federal government, this additional revenue gives us an opportunity to invest in the state’s priorities and to cut taxes for hard working families,” says Assembly Speaker Robin Vos (R-Rochester). “Shortly, our caucus will discuss those priorities and move forward on lowering the income and property tax burden on Wisconsin businesses and families.”

“This is a once-in-a-generation opportunity to fundamentally reform our tax code and provide transformational tax relief for Wisconsinites,” says Senate Majority Leader Devin LeMahieu (R-Oostburg). “Hard-working taxpayers gave the state a massive surplus. We will take this moment to consider ways to significantly reduce the tax burden on workers and main street businesses and pay off state debt to save taxpayers long into the future.”

“I’m proud of the work we’ve done to respond to COVID-19 and put our economy in the best position to recover,” Governor Evers says, “which is why there’s no excuse for choosing not to fully invest in our kids and our schools, broadband, venture capital and support for Main Street businesses, among other critical priorities.” 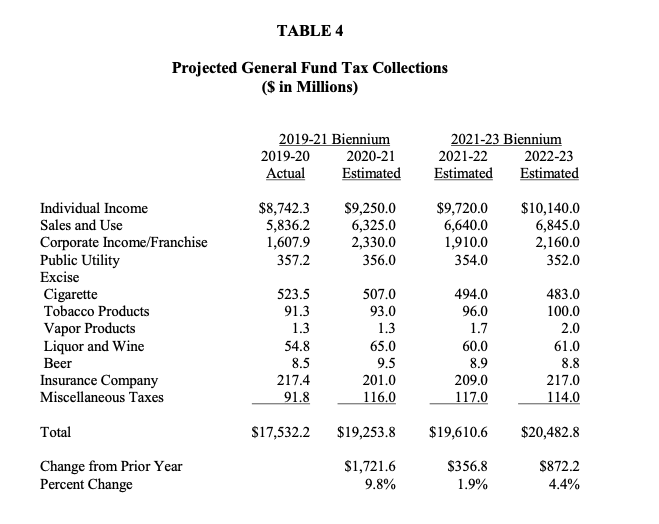 JFC Co-Chair Howard Marklein (R-Spring Green) warned that this quick rebound of Wisconsin’s finances post-COVID-19 pandemic, “underscores the need to be cautious with this budget. If we recklessly spend this new money and grow taxpayer obligations in an unsustainable way, we risk future fiscal stability.”

“Assembly Republicans will continue to advance a reasonable, responsible and realistic budget that spends within our means, while also avoiding huge tax hikes on Wisconsin residents and businesses and welfare expansion like Evers proposed,” says JFC Co-chair Mark Born (R-Beaver Dam). “The budget- writing committee will work in the days and weeks ahead to deliver meaningful tax relief where it counts most.”

After the LFB release, JFC held a meeting to vote on budget items related to the Department of Transportation, the building program, Department of Military Affairs, and distributions of the Volkswagen Settlement.

The I-94 east-west corridor reconstruction project was authorized by JFC for $40 million in general fund-supported bonding. JFC also authorized another $20 million in bonding to support taxpayer-friendly design-build road projects.

The Committee voted to increase funding to the State Highway Rehabilitation Program. The increases add $56.8 million in SEG, bringing the program total to $2.068 billion during the biennium.

Spending under the Major Highway Development Program will be kept flat under the JFC budget.

Finally, yesterday’s JFC transportation vote allows a waiver program for people who do not want to take a drivers’ test in order to receive a driving license. If passed by the legislature and the governor, the change will go into effect in January 2022.