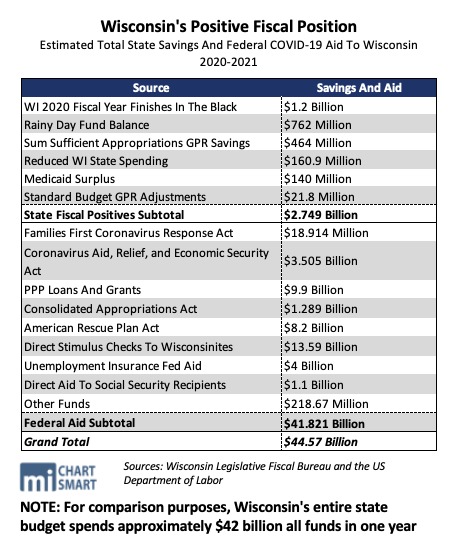 The latest wave of federal COVID-19 aid to Wisconsin has been finalized and published. Governor Tony Evers and the Department of Administration (DOA) are set to receive $2.5 billion in funds from the American Rescue Plan Act (ARPA) to use at Evers’ discretion. That is about $700 million less than previously estimated. Gov. Evers, of course, immediately called the reduction in anticipated funding “problematic” and said that the decrease “hurts.” What Gov. Evers failed to mention, and some in the mainstream failed to include in this debate to give it context, is the enormous amount of federal COVID-19 aid that government, state and local, in Wisconsin and individual Wisconsinites have already received.

“Obviously that $700 million makes a difference, that’s $700 million that we can’t help people, our small businesses, and others to recover as quickly as we wanted to,” Evers told the press on Wednesday.

Don’t let the Governor’s spin fool you. First, the change in ARPA funding has to do, at least in part, with Wisconisn’s relatively low unemployment rate and stronger that anticipated economic recovery from the government lockdown. Second, not only will Evers receive $2.5 billion in ARPA aid, which is just the latest round of federal aid, but local governments in Wisconsin are set to receive another $2.3 billion and K-12 schools another $1.5 billion in federal aid. In total, Wisconsin governments, institutions, businesses, and residents will receive an estimated $8.2 billion in ARPA aid. A $700 million decrease is approximately an 8.5% reduction overall and, when put into context, hardly qualifies as problematic.

The $8.2 billion also stacks on top of other federal COVID-19 aid that the state has received, and the other positive financial news from state government over the past year. No matter how you slice it, Wisconsin is, in fact, in a positive fiscal position.

MacIver estimates that, throughout the coronavirus pandemic, Wisconsin governments, institutions, businesses, and citizens have received a total of $41.8 billion in aid from the federal government. That’s nearly as much as Wisconsin spends in a typical year: Wisconsin budgeted around $42 billion all funds spending for one year of the 2019-2021 biennium. 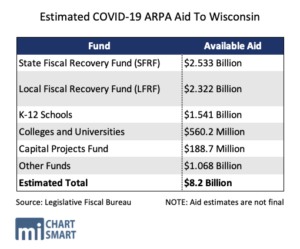 Set aside this enormous onslaught of federal cash, and Wisconsin is still in an astonishingly strong fiscal position. Despite predictions that the COVID-19 government lockdown would crater the economy, the state finished the 2020 fiscal year with a $1.2 billion General Fund balance, the largest in two decades. Our state “Rainy Day Fund” finished the fiscal year with a $762 million balance, the “largest balance in state history,” according to the state Department of Administration. Governor Evers also lapsed over $300 million in state agency spending in response to the fiscal toll of the COVID-19 lockdowns. On top of that, the Joint Finance Committee (JFC) approved nearly $500 million GPR in taxpayer savings through sum sufficient appropriation re-adjustments and standard budget adjustments.

All told, Wisconsin sits with an estimated total of $2.7 billion available at the state’s disposal.

Between state savings and several waves of federal stimulus money, Wisconsin has benefited from a grand total of $44.6 billion—with a B—in unanticipated cashflow.

The state’s fiscal outlook is likely to grow even stronger than that if JFC’s “base” biennial budget is adopted. The nonpartisan Legislative Fiscal Bureau estimates that this budget could yield a $2.5 billion surplus by the end of the 2021-2023 biennium.

Despite Governor Evers’ opinion that ARPA funds are needed, and needed right now, Wisconsin is far from hurting for cash. That’s a success that everyone should celebrate.

Even with our fortunate financial position, we have yet to hear anything from Governor Evers about letting go of his proposed $1.7 billion increase in state taxes.

When will Governor Evers give up his doom-and-gloom pandemic outlook and be honest with the Wisconsin taxpayer that there is no crisis that warrants a tax increase?