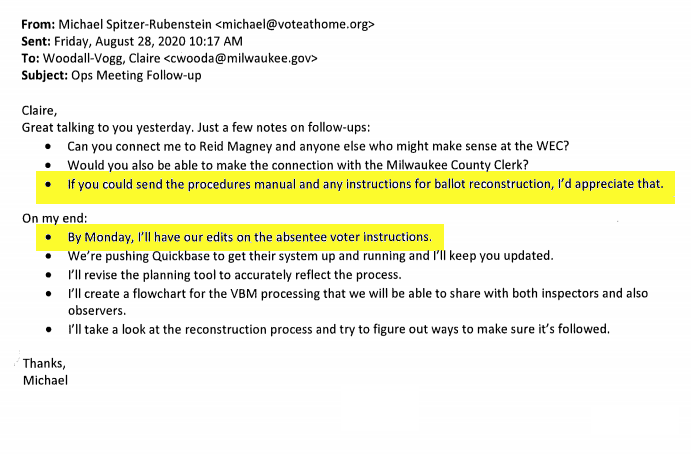 Newly released emails paint a disturbing picture of how the City of Milwaukee ran the 2020 presidential election and again call into question the legality of liberal-leaning interest groups’ deep infiltration of municipal procedure.

Under Wisconsin law, “each municipal clerk has charge and supervision of elections and registration in the municipality.”  This is unambiguous.  It is unequivocal.  Yet in five of Wisconsin’s largest cities, it didn’t happen.

In May, Racine Mayor Cory Mason—a hyper-partisan Democrat—emailed the mayors of Milwaukee, Madison, Green Bay and Kenosha to hold a virtual meeting in which “the Elections Administration Planning Grant will be discussed.”  That grant, from Facebook founder Mark Zuckerberg’s Center for Tech and Civic Life (CTCL) would ostensibly be used to cover the increased costs of running a presidential election during the COVID-19 pandemic.

The mayors met virtually at least four times from May to August to discuss their joint bid for CTCL grant money, but Mason took the lead and even, according to an email from City of Racine attorney Vicky Selkowe, sought to “develop a robust plan for election administration for all five of our communities.”

This would, of course, run afoul of state law, as only the municipal clerks or election boards in the other four communities have the authority to plan for and administer elections, but it was clear that these five cities did not have much regard for state law.

According to emails, the Racine Common Council approved the first phase of grant money acceptance on behalf of all five communities, which became known as the Wisconsin Five.  All five eventually received CTCL grant money, with Milwaukee getting more than $2.1 million.

It quickly became clear that this money came with strings attached.

According to the agreement the City of Milwaukee signed with CTCL, CTCL set the ground rules for how every penny of the money was to be spent, and Milwaukee was not allowed to “reduce or otherwise modify planned municipal spending on 2020 elections.”  In addition, the city was not permitted to “use any part of [the] grant to give a grant to another organization unless CTCL agrees to the specific sub-recipient in advance, in writing.”

CTCL obviously had its own partner groups in mind and didn’t want interference with its vision for how the election would be run.

This is a major legal and constitutional issue, as Article I, Section 4, Clause 1 (which is known as the Elections Clause of the U.S. Constitution) holds that “the Times, Places and Manner of holding Elections for Senators and Representatives, shall be prescribed in each State by the Legislature thereof.”

In federal elections like the one held in November, then, the Wisconsin Legislature has final say over administration.  It enacted a law delegating this administrative role to the municipal clerk and reiterated in a different statute that “only election officials appointed under [state law] may conduct an election.”

By accepting CTCL’s conditions for running the election, the City of Milwaukee—and the other four communities that accepted CTCL money—violated state law.  Nothing in the law allows for this sort of thing, yet it quickly became clear that CTCL, not Milwaukee, was effectively running Milwaukee’s election.

In late July, just a few weeks after the CTCL grant to the Wisconsin Five was announced, CTCL’s Josh Goldman emailed Milwaukee Election Commission executive director Claire Woodall-Vogg to offer up “an experienced elections staffer that could potentially embed with your staff in Milwaukee in a matter of days.”

A month later, Michael Spitzer-Rubenstein-the Wisconsin lead for the National Vote at Home Institute, one of CTCL’s partner organizations—met with Woodall-Vogg and immediately got to work.

“Claire, great talking to you yesterday,” he wrote in an email on August 28th.  “Just a few notes on follow-ups: Can you connect me to Reid Magney and anyone else who might make sense at WEC [the Wisconsin Elections Commission]?  Would you also be able to make the connection with the Milwaukee County Clerk?”

Woodall-Vogg did, and that same day Meagan Wolfe, WEC’s administrator, emailed the municipal clerks in Green Bay, Madison, Racine, and Kenosha (the other members of the Wisconsin Five) to let them know about Spitzer-Rubenstein and the Vote at Home Institute “in case you thought this might be a group you are interested in working with or learning about.”

Green Bay’s clerk might not have wanted to, but its mayor, Eric Genrich, certainly did…and Spitzer-Rubenstein and his team so thoroughly (and wholly unlawfully) took over Green Bay’s election planning that the clerk, Kris Teske, quit in disgust.

Stunningly, this email chain proves that Wolfe and other members of the Wisconsin Elections Commission staff were aware of Spitzer-Rubenstein’s involvement in Milwaukee’s election and even wanted him doing more for other cities (notably only heavily Democratic cities).

Now why would an outside group need access to ballot reconstruction instructions?  And, more importantly, why is the leader of said group demanding this from the executive director of the Milwaukee Election Commission—the one person in the city with the lawful authority to run elections?

Because Clair Woodall-Vogg was not running this election; CTCL and its front man Michael Spitzer-Rubenstein were.

By accepting CTCL’s conditions for running the election, the City of Milwaukee—and the other four communities that accepted CTCL money—violated state law.  Nothing in the law allows for this sort of thing, yet it quickly became clear that CTCL, not Milwaukee, was effectively running Milwaukee’s election.

“By Monday,” Spitzer-Rubenstein wrote in that same email, “I’ll have our edits on the absentee voting instructions.  We’re pushing Quickbase [a data flow management company] to get their system up and running and I’ll keep you updated.  I’ll revise the planning tool to accurately reflect the process.  I’ll create a flowchart for the vote-by-mail processing that we will be able to share with both inspectors and also observers.”

It goes without saying that Spitzer-Rubenstein, who was neither Milwaukee’s clerk nor a member of city government, was not authorized by the Wisconsin Legislature to do any of this.  Yet he did, and Woodall-Vogg let him.

More significantly, once early voting started, she was providing him with a daily update on the numbers of absentee ballots returned and still outstanding in each ward.

Even with this private data sharing that no other organization received (or should have received), Spitzer-Rubenstein still wanted more.  He wanted access to the Milwaukee Election Commission’s voter database.

“We’re hoping there’s an easier way to get the data out of WisVote than you having to manually export it every day or week,” he wrote.  “To that end, we have two questions: 1. Would you or someone else on your team be able to do a screen-share so we can see the process for an export? 2. Do you know if WisVote has an API [application programming interface] or anything similar so that it can connect with other software apps? That would be the holy grail (but I’m not expecting it to be that easy).”

“While I completely understand and appreciate the assistance that is trying to be provided,” Woodall-Vogg replied, “I am definitely not comfortable having a non-staff member involved in the function of our voter database, much less recording it.”

That may have been a bridge too far, but Woodall-Vogg still gave Spitzer-Rubenstein exclusive access to the database in the form of daily reports.  Why?  What exactly was the National Vote at Home Institute doing with its daily reports?  Was it making sure that people were actually voting from home by going door-to-door to collect ballots from voters who had not yet turned theirs in?

Was this data sharing a condition of the CTCL grant?  And who was really running Milwaukee’s election? The trove of newly released emails makes clear that it certainly wasn’t Milwaukee.  That on its face is a clear violation of Wisconsin law and should spark a thorough investigation into precisely what other laws might have been violated, too.