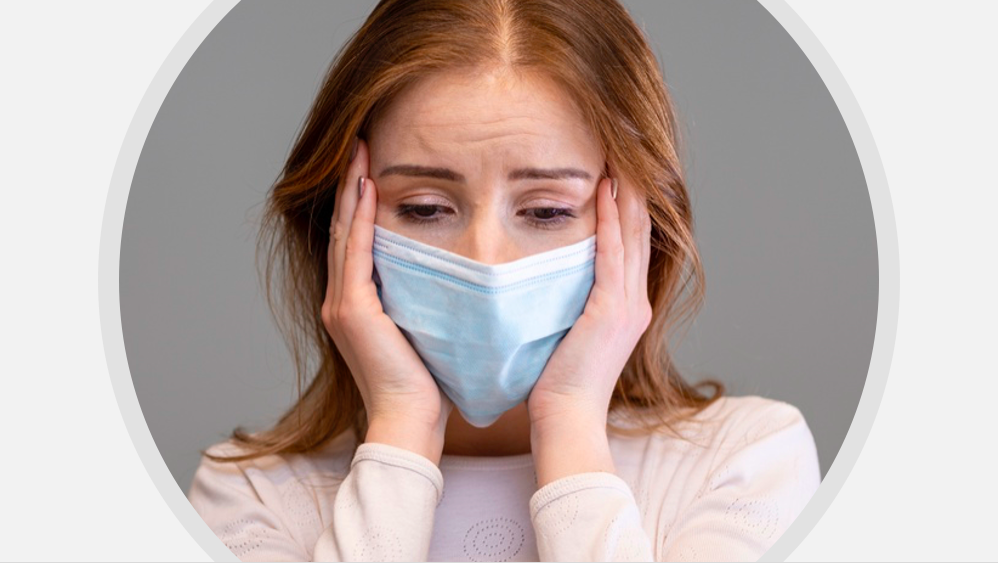 Why are so many people—including those who have been fully vaccinated—still obsessively wearing masks when the science says they don’t need to?

When the Centers for Disease Control and Prevention (CDC) announced last week that fully vaccinated people no longer needed to wear masks in nearly all situations, one would have expected this to be met with universal celebration.

It wasn’t.  A sizeable number of people have seemed hesitant, unwilling even, to take off their masks.  Many of them, reported the Associated Press, are frightened of “breakthrough infections” of COVID-19 that have occurred in fully vaccinated people.  But there are also others, like Raquel Mitchell, who will not get the vaccine and is “still wearing a mask and taking other precautions, like dining outdoors at restaurants near her home in New York’s East Harlem area and either asking for plastic utensils or bringing her own.”

When, the AP asked, will she feel safe enough to go barefaced?

“I don’t know. Never,” she answered. “It’s going to be really difficult for me.”

Those who, like Mitchell, remain genuinely terrified of the virus after more than a year’s worth of doomsday news coverage may well comprise the bulk of those who are still masking, but others, like New York Daily News writer Kate Neuman, view the mask as a sort of security blanket as they return to the stress of pre-pandemic life.

In an essay entitled “Me and My Mask: Why I’m Not Willing to Give it Up Yet,” she wrote this week that she has “become comfortable with most of my face hidden. I find a kind of relief behind the masks.”  When mask mandates were first instituted last year, she was ecstatic.

“Poof, courtesy of a bit of fabric, no need to worry about my expression, that I look too open, too available for interruption,” she explained.  “So now I’m thinking: Maybe I’ll keep wearing a mask on the subway, even post-COVID, since it makes the journeys underground so much less stressful.”

Neuman pretty obviously has untreated social anxiety disorder, but untold thousands—maybe even millions more—don’t but still can’t seem to take their masks down.  For them, the reason might be a little deeper: The mask has become a symbol of who they are, how seriously they’re taking the pandemic, and how much they care about and are sacrificing for their fellow man.

For them, the mask is a way to instantly communicate that they are both model citizens and are not the sort of anti-mask, anti-science knuckle-draggers that they have spent a year demonizing.  The mask doesn’t just shield them from the virus; it shields them from the stigma of being assumed to be a political conservative.

As one Washington, DC resident put it, “I guess I’m vaccinated so I don’t have to wear a mask outside, but I really don’t want people to think I’m a Republican.”

What people like The Atlantic’s Dana Stevens want others to think is that they care about the health and safety of others.

“Excuse me if I, like many of the people I see around me, am not yet quite ready to expose my lower face,” she wrote in a piece titled “Excuse Me If I’m Not Ready to Unmask.” “Putting aside the hard science for a moment, wearing a mask in public spaces—especially indoors, where transmission is more likely—serves a broader social purpose: It says to those around us that, whatever our vaccine status, we value community safety.”

That, in a nutshell, is why a surprising number of people—almost all of them liberals—are so hesitant to take off their masks.  And why wouldn’t they? From the very beginning of the pandemic they have been told that mask-wearing was virtuous, selfless, and compassionate—in other words, everything every good liberal imagines themselves to be.  And even better, they could literally wear this on their face for everyone else to see.

They could be walking “coexist” bumper stickers.

But they wouldn’t be any safer.  Last March, no less an authority on COVID safety than Dr. Anthony Fauci went on 60 Minutes to tell the public not to wear masks.

“There’s no reason to be walking around with a mask,” he said.  “When you’re in the middle of an outbreak, wearing a mask might make people feel a little bit better and it might even block a droplet, but it’s not providing the perfect protection that people think that it is.  And, often, there are unintended consequences — people keep fiddling with the mask and they keep touching their face.”

That, of course, makes perfect logical sense: Touching the face means spreading germs from the fingers to the nose and mouth and feeling protected by a mask means a greater likelihood that the recommended six feet of social distancing wouldn’t be followed.

Yet less than two months later, Fauci—who had apparently caved to political pressure—reversed course and, in an appearance on MSNBC said he supported mask-wearing because of the message it sends.

“It’s sort of respect for another person and have that other person respect you. You wear a mask, they wear a mask, you protect each other,” he explained. “I do it when I’m in the public for the reasons that I want to protect myself and protect others and also because I want to make it be a symbol for people to see that’s that the kind of thing you should be doing.”

It wasn’t exactly a scientific reason, but almost instantly it became the dominant message.  Wearing a mask was a way to show you cared or, in the words of New York Governor Andrew Cuomo—then the left’s most trusted public official on COVID policy—it was about respect.

“You can have the mask down when you’re walking in the woods, but now you see someone coming the other way, I’m going to pass by the other person, you put the mask on,” he said.  “I mean, it’s the least that we can do, right? Everyone is killing themselves, people are working 24 hours a day. Show some respect, show some basic modicum of respect.”

Within days, that notion was everywhere.  The mask became a sign of respect for the hardworking nurses and doctors who were fighting the disease as well as for one’s fellow citizens who were trying to avoid it.  By wearing the mask, you showed them you were on their side…on the right side.

So rigidly enforced was this new social norm that violating it meant one was quite literally an enemy of America.

“It is really weird to me that so many of these people who refuse to wear masks claim to be proud patriots who would do anything for their country,” scolded Daily Show host Trevor Noah.  “Because right now, America is at war with the Coronavirus, and if you’re going out in public without wearing a mask, you’re fighting for the other side.”

That may have been over-the-top, but it had nothing on Ohio Governor Mike DeWine, who actually intimated that the Bible basically commanded the wearing of masks.

“This is about loving your fellow human being,” he said during an appearance on CNN last May. “You know, the instruction is as old as The Bible. You’re supposed to love your fellow man and woman. And that’s what we’re really doing. I think that’s the message, that you’re not wearing it so much for yourself as you are wearing it for that person that you’re going to come in contact with.”

When the message is “Thou shalt mask,” is it any wonder that that so many people started to see it as their sacred duty?  The science surrounding mask-wearing certainly didn’t change in six weeks, but the political winds did.

The CDC claimed last May that mask-wearing might stop asymptomatic spread of COVID-19—that is, the spread of the disease by those who didn’t know they were infected because they had no symptoms.  However, the following month the World Health Organization confirmed that asymptomatic spread was exceedingly rare.  Outdoor spread was even rarer, as epidemiologists have determined that such infections might account for fewer than 0.1 percent of cases.

Clearly, outdoor masking has never been necessary—with or without a vaccine.  Yet a surprising number of people still are wearing masks outdoors, indoors, everywhere.  Even after they’ve been vaccinated.  Even after they know masking no longer makes any logical sense.