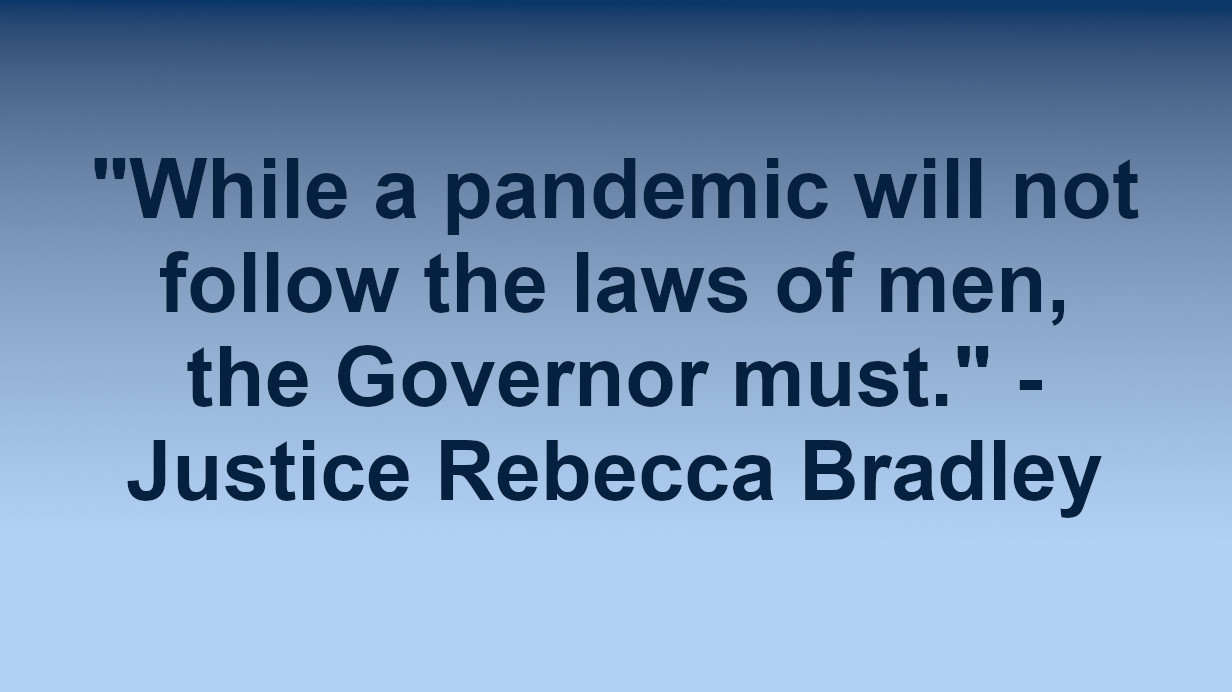 Dan O’Donnell breaks down the Supreme Court’s opinion ending Governor Evers’ public health emergencies and notes that the dissent was nearly as significant as the opinion itself.

It took a while after oral arguments in November(!), but this week’s decision by the Wisconsin Supreme Court was as notable for what it revealed about liberal judicial activism as for how it ended Governor Evers’ unlawful executive overreach.

The legislature granted no such extension, and in fact passed a joint resolution to end Evers’ emergency in January.  The Governor issued a new one less than an hour later.

If ever there was open defiance of the law, this was it; and the Court recognized it.

“The plain language of the statute explains that the governor may, for 60 days, act with expanded powers to address a particular emergency,” Justice Brian Hagedorn wrote in the majority opinion. “Beyond 60 days, however, the legislature reserves for itself the power to determine the policies that govern the state’s response to an ongoing problem.”

One need not be a Supreme Court Justice or even a lawyer to understand the fundamental concept at play here: The governor can declare an emergency—thereby granting himself dramatically greater authority to combat it—but after 60 days, the legislature must consent to the extension of this authority.  A governor can’t just pretend that there is a new emergency every 60 days in an effort to get around this.

Troublingly, though, the Court’s three liberal justices didn’t agree and, in a dissent written by Justice Ann Walsh Bradley, revealed the extent to which they are willing to ignore the plain letter of the law in service to their own political policy preferences.

“This is no run-of-the-mill case,” Bradley wrote.  “We are in the midst of a worldwide pandemic that so far has claimed the lives of over a half million people in this country. And with the stakes so high, the majority not only arrives at erroneous conclusions, but it also obscures the consequence of its decision. Unfortunately, the ultimate consequence of the majority’s decision is that it places yet another roadblock to an effective governmental response to COVID-19, further jeopardizing the health and lives of the people of Wisconsin.”

That is just a stunning paragraph, as it wholly ignores the central issue in the case—whether the governor can declare successive emergencies for the same health issue—and admonishes the majority because its decision will place a “roadblock to an effective governmental response.”  This is nothing more than a personal opinion, and it is most certainly not the role of a Supreme Court Justice—or any judge, for that matter—to base rulings or votes on personal thoughts about what does or does not constitute an “effective government response.”

The only role of a judge is to determine whether a government response is lawful and constitutional, balancing it against any individual rights on which it may infringe.  “Effectiveness” as it pertains to any governmental action is inherently subjective and almost entirely dependent upon an individual interpretation of said action’s consequences.

From the very first paragraph of her 28-page dissent, it is clear that the crux of Bradley’s argument against the majority’s opinion is that it will ultimately result in Wisconsin no longer being under a public health emergency.

“Among the powers hamstrung by the majority are critical executive powers set forth by statute that may be exercised only in a public health emergency—powers that are essential to saving lives and getting a rapidly-spreading disease under control,” she wrote.

Again, this is a subjective assessment based on little more than Bradley’s own (apparently limited) understanding of how both diseases and public health emergencies work.  On November 20, the day Evers issued his fourth public health emergency declaration, the seven-day average of new COVID-19 cases in Wisconsin was 6,738 per day.  On February 4, the day he declared a sixth emergency, the seven-day average of new cases was 1,414.

In no way was the disease “rapidly spreading” in February as compared with November, but in Bradley’s opinion Evers was still justified in using powers that she determined were “essential to saving lives.”  If they were so essential, why did the seven-day average of deaths per day drop from 59 on November 20 to 30 on February 4 without the governor doing a single thing with his emergency powers except to extend his statewide mask mandate.

Evers’ policy, then, was not objectively essential in either saving lives or getting the disease under control.   It was in Bradley’s mind, however, and she wrote an entire dissent based on the premise that allowing Evers’ emergency order (and with it the mask mandate) to be rescinded would be inexcusable.

Ironically, it is this line of thinking from a jurist that is inexcusable.  Neither Ann Walsh Bradley nor the two liberals who signed on to her ridiculous dissent, Jill Karofsky and Rebecca Dallet, have any role in the policymaking process beyond a determination of whether the policies the legislative and executive branches put forth pass constitutional muster.

Their belief that their beliefs are at all an appropriate foundation for judicial review is nearly as dangerous as Evers’ thought that he could merely ignore state law whenever he determined the situation warranted.

Both reflect an arrogance and ignorance of the proper role of government, and Wednesday’s Court opinion offered the rare opportunity to see both converge into an easy-to-understand lesson about the dangers of liberal philosophy.

When a governor is arrogant enough to believe that he alone can stop a pandemic and three liberal justices are ignorant enough to think that it is their role to judge his policies on their perceived merits, government itself loses its way.