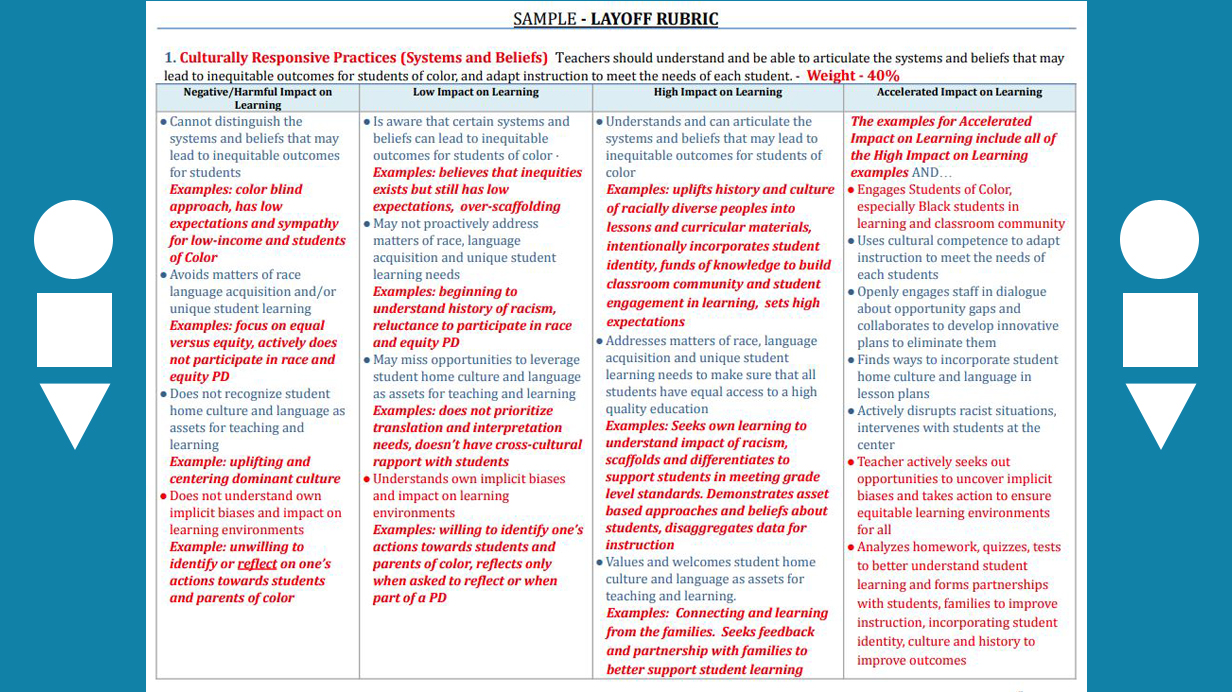 The Madison Metropolitan School District (MMSD) is planning to make sweeping changes to how it handles teacher layoffs, and wokeness could become the biggest factor in who stays and who goes.

All teachers would be scored in five weighted categories, according to the school board’s current draft proposal. Most of the weight would be given to a teacher’s “Cultural Responsive Practices,” which could make up 40% of their score.

“Teachers should understand and be able to articulate the systems and beliefs that may lead to inequitable outcomes for students of color, and adapt instruction to meet the needs of each student,” according to the draft.

Sample layoff rubric provides examples of unacceptable practices and attitudes including: taking the color-blind approach, focusing on equality instead of equity, failing to understand one’s own implicit bias, and being reluctant to participate in race and equity professional development.

“If you’re a teacher and you cannot distinguish systems and beliefs that lead to inequitable outcomes for students, you should not be in MMSD,” School Board Member Ananda Mirilli said.

Instead, teachers must “[seek] out opportunities to uncover implicit biases and [take] action to ensure equitable learning environments for all.”

The next category would be “Student Learning Objective” with a weight of 30%. That focuses on academic growth rather than achievement. It is measured subjectively. Teachers with the best outcomes would have “in collaboration with focus group students and/or colleagues analyzed the outcomes of the SLO process and reflected on the growth achieved throughout the cycle.”

The next categories are “Additional Language Proficiency,” “Academic Credentials/Certifications,” and “Seniority.” All are weighted at 10% each.

If teachers are tied in their total score, then whoever scored lower in “Cultural Responsive Practices” will be let go.

Needless to say, Madison Teachers Inc. (MTI), the teachers’ union, is not happy about the proposed changes. The school board received 119 written statements about the handbook. All of them were opposed to the changes and in support of the union. Of those statement, 90 of them were more-or-less identical.

“Creating a system that relies on very subjective rubrics and barely considers seniority, sets us up for a work culture in which teachers will not feel able to take the risk of speaking up for their students, for learning and working conditions, safety, for equity, or anything other than parroting what the administration wants to hear,” the statements read.

One special education assistant said the school board was inadvertently proving itself to be racist, and reminded him of Scott Walker.

“Is everyone on this board willing to look my coworkers of color in the eye and tell them it’s ‘good’ for them if we follow Scott Walker’s lead and further deprive them of workplace protections?” one district employee wrote.

“Is it anti-racist to strip staff of color of job security, thereby rendering their livelihoods more precarious? Is it anti-racist to further subject black and brown educators to the will of a predominantly white administration? Is everyone on this board willing to look my coworkers of color in the eye and tell them it’s ‘good’ for them if we follow Scott Walker’s lead and further deprive them of workplace protections?” Mike Kovanda wrote in his statement.

During a Mar. 8th meeting, School board member Ananda Mirilli said teachers should not feel threatened about changes in seniority.

“People are equating changing of language on seniority as if we’re laying off everyone that has seniority, which is not the case,” Mirilli explained. “What we are interested in laying off and is no longer welcome in our district, is racist teachers.”

Mirilli said the district shouldn’t wait for layoffs to get rid of “racist teachers.” She wants them gone now.

Madison Schools is working on a new policy to layoff non-woke teachers first. Some want them gone now. #WIright pic.twitter.com/WUWKpwXkgX

Some on the board believe the issue of layoffs is a moot point, because the industry is currently facing a teacher shortage. However, there is also concern that enrollment numbers could drop significantly in the fall, bringing this issue to a head.

Although MTI strongly opposes the change in seniority-based layoffs, the teachers’ union does support other changes to the employee handbook. MTI asked the district to modify the handbook to ensure no one losses any pay if schools are closed, regardless of the reason.